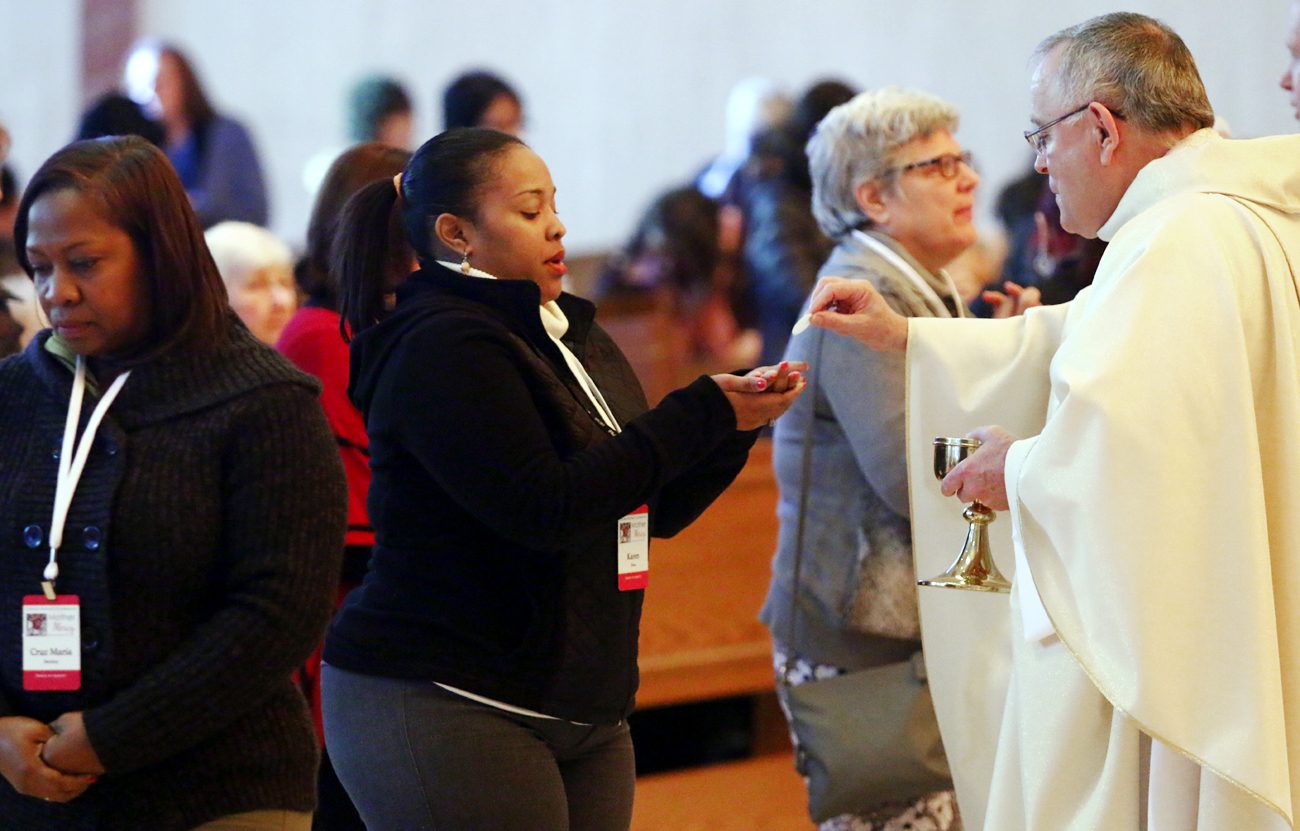 Archbishop Charles Chaput distributes Communion during Mass at the Catholic Women's conference Oct. 29 at the National Shrine of Our Lady of Czestochowa, Doylestown. (Sarah Webb) 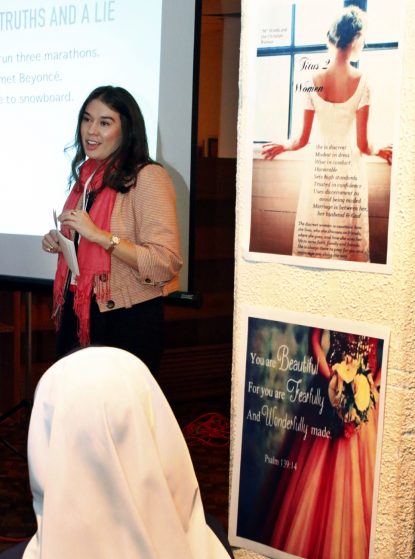 Theresa Leinker from St. Andrew Parish’s Youth Ministry in Newtown speaks to the young women of the youth track about true beauty revealed.

It takes quite a large congregation to fill the National Shrine of Our Lady of Czestochowa in Doylestown and it was overflowing on Saturday, Oct. 29 when Archbishop Charles Chaput visited to celebrate the opening Mass for the 2016 Catholic Women’s Conference.

It drew more than 1,200 women, young and old, from the four corners of the Archdiocese of Philadelphia and beyond.

(See a photo gallery of the conference here.)

The theme of the conference was “Mother of Mercy, Make Our Hearts like Yours!” In his homily Archbishop Chaput told his congregation “Mary is the model of discipleship,” and “some of the temptations for women in the world is to abandon mercy in order to have equal rights with men. The last thing the world needs is more men.”

As the archbishop spoke his homily was simultaneously translated into Spanish for the sizable number of Latinas at the conference. There was a separate track of conferences for the Spanish speaking, as well as a youth track and even a conference for the hearing impaired in American Sign Language.

Preregistration was 1,200 according to Meghan Cokeley, director of the archdiocesan Office for the New Evangelization, and it appeared everyone came. It was a healthy increase from the first conference that drew 900, according to Cokeley, who attributed it to “the hand of God and the hand of Our Lady,” assisted by strong endorsement from Archbishop Chaput and the hard work of women on the committee. 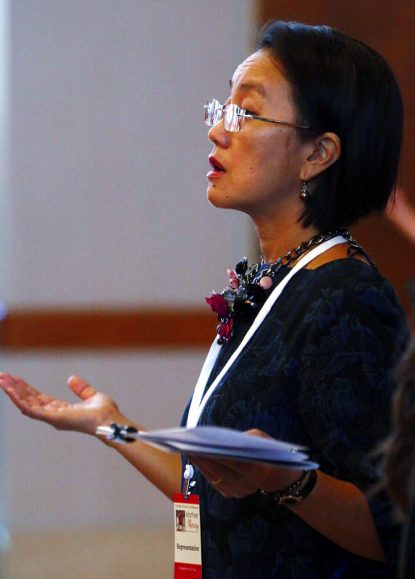 “Many came in groups, some as large as 30,” Cokeley said. “It was their effort in telling friends and family to attend. I think we all felt a strong sense of spiritual sisterhood.”

It also helped to have a strong roster of speakers. Mary Rice Hasson, a fellow at the Ethics and Public Policy Center in Washington, D.C., spoke on “The Feminine Genius: Woman’s Mission of Mercy in the Family, the Church and the World.”
Dominican Friar Father Jordan Kelly chose the topic, “Mary, Mother of Mercy, Make our Hearts Pure like Yours.”

In the Spanish track, Lucia Luzondo, director of the Secretariat of the Laity and Family for the Archdiocese of San Antonio, spoke on “El Genio Feminino”  and “Maria, Madre de la Misericordia.”

There were equally qualified speakers and presenters at breakout sessions.

While many came in groups, some came alone, for example Margaret Sitbon of Our Lady of Consolation Parish in Philadelphia. “I saw it on Facebook, and I’m very excited to be here,” she said.

On the other hand Alida Taylor, who is a postulant with the Sisters of Life, came down with a group of 13 from Bronx, New York, and thought the Mass was beautiful. Actually a member of her congregation, Sister Mary Elizabeth Wusinich, formerly of King of Prussia, led a breakout session on “Living Mercy: A Fruit of Union with Jesus.”

Each woman present took home her own personal favorite moments. For Cokeley it was the closing Divine Mercy prayer service, presided over by Bishop John McIntyre.

“It was a beautiful experience to be kneeling with 1,200 women in front of Jesus in the Blessed Sacrament,” she said, “basking in his love and praying one of the church’s most beautiful prayers, the Divine Mercy Chaplet.”