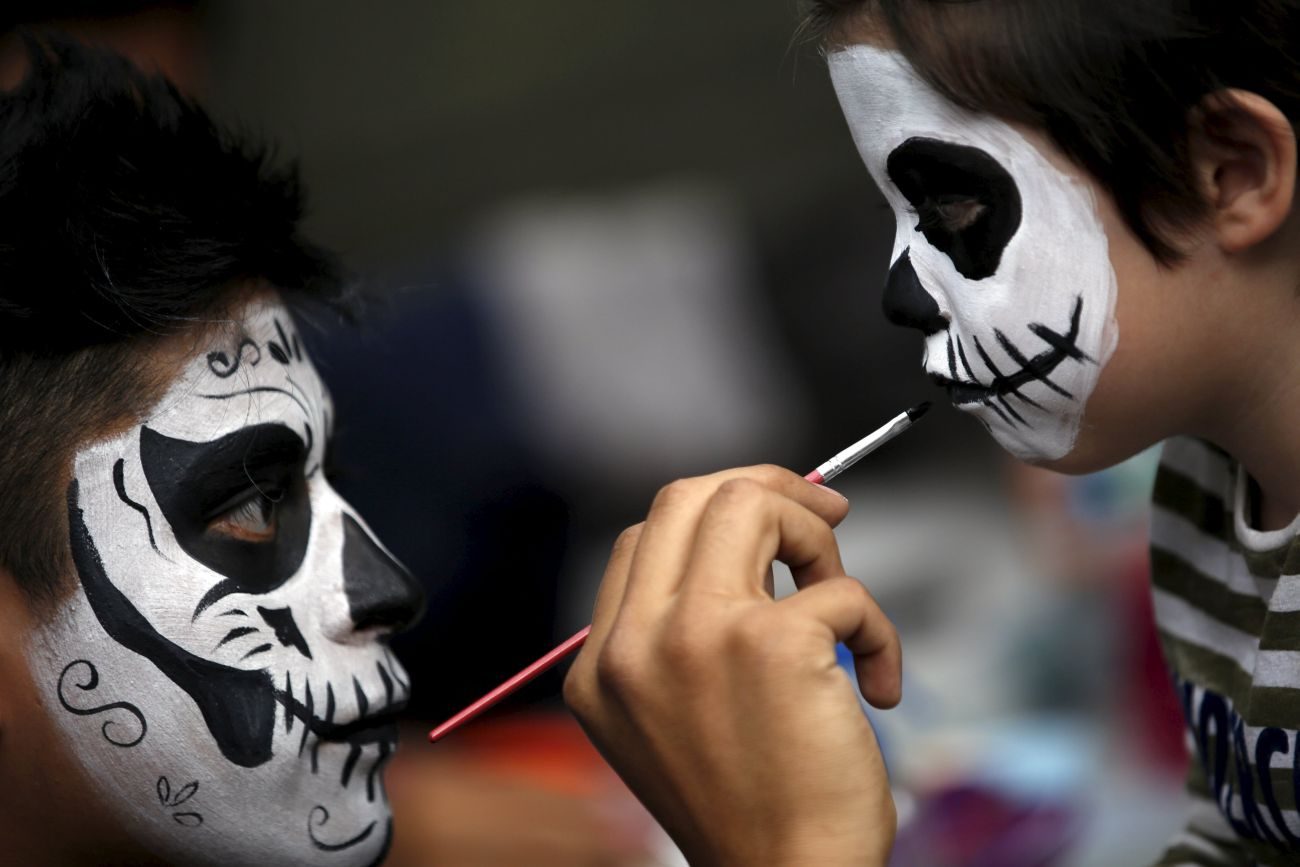 A man paints a boy's face to look like "Catrina" in Mexico City, as part of Day of the Dead celebrations in this Nov. 1, 2015, file photo. In Mexico "Catrina" symbolizes elegant death. (CNS photo/Carlos Jasso, Reuters)

WASHINGTON (CNS) — For years, Esther Reyes, of Silver Spring, Maryland, carefully guarded the sugar skulls she brought back from her native Mexico.

The colorful skulls are an important component in setting up an altar, part of a Mexican custom passed down from her family, that helps her physically keep in mind her ancestors and departed loved ones during All Souls’ Day. Reyes has carefully packed them away for reuse each year since they weren’t easily available in her new home in the U.S.

But this year, while getting materials ready for her altar, she noticed a local bakery in Maryland was taking orders for those who wanted the artisanal skulls. They also offered the traditional bread available only during what’s popularly known as the Dia de los Muertos, or Day of the Dead, but which essentially is part of the Catholic feast of All Souls mixed with some pre-Columbian customs.

Mexico’s colorful celebration, which marks the feast in a grand manner, with food, art and music, while families clean the final resting place of their loved ones at local cemeteries, has migrated north, at least in a commercial fashion.

Aside from the local Mexican bakeries offering the traditional pastries, chain stores such as Pier 1 Imports now offer a smattering of Dia de los Muertos merchandise, from throw pillows with male and female colorful skulls on them to napkins and decorative spheres with skulls to brighten up the coffee table. Restaurants and bars in some cities such as Washington offered Dia de los Muertos specials this year and even the Nov. 2 Google Doodle featured purple tissue-paper cutouts, popular decorations on altars and graves on that day.

Capuchin Franciscan Father Urbano Vazquez, a native of Mexico who now lives in Washington, said the feast is spiritually meaningful for some because it’s the opportunity to reflect on the lives of those who have died. In his hometown of Cholula, near Puebla, Mexico, the townsfolk spend the entire day at the cemetery cleaning and decorating graves, heading to Mass to pray for the souls of their loves ones, lighting candles, making the favorite meals of those who have died. It a feast full of reverence and love, he told Catholic News Service. 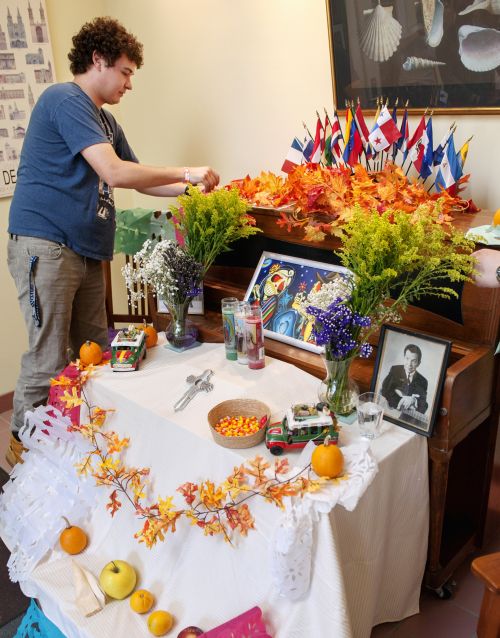 Ryan Pallas, a Spanish-language student at Nazareth College, helps decorate a Day of the Dead altar at the college in Pittsford, N.Y., Nov. 2. The Mexican tradition is often observed by families who build altars in their homes and decorate them with flowers, food and sugar skulls in honor of deceased loved ones. (CNS photo/Mike Crupi, Catholic Courier)

Even after his family moved to Virginia, the Day of the Dead customs on All Souls’ Day still have continued. His mother, Justina Ortega, makes mole, a sauce made with chocolate and hot peppers, that his ancestors liked, and she places the photo of his dead father on an altar with “offerings,” which could be a favorite food or fruit, to remember her husband with special intention that day.

As with anything, you have to be careful about “distortion” and some have twisted the feast into something different but those elements are not part of the customs of Catholics, he said.

Reyes, of Maryland, said that some confuse the feast with the worship of death, but it’s actually an embrace of death as part of a spiritual life, which knows that physical death is not an end. From a spiritual point of view, she said, the feast “emphasizes that the soul has not died, even while the body has died.”

Recently, Reyes found out that Mexico, for the first time. is holding a Day of the Dead parade in its capital — fearing that the custom could vanish as the country is becoming more secularized. There could be an opportunity in its taking root, in some form, to the north, she said, if people take the time to tell others about its origins.

“I think it can be a good thing as long as it’s explained,” she told CNS. “There is nothing to fear (about death), it has a spiritual side and that is part of life. It’s also an opportunity to respect those who have departed and that is very spiritual.”