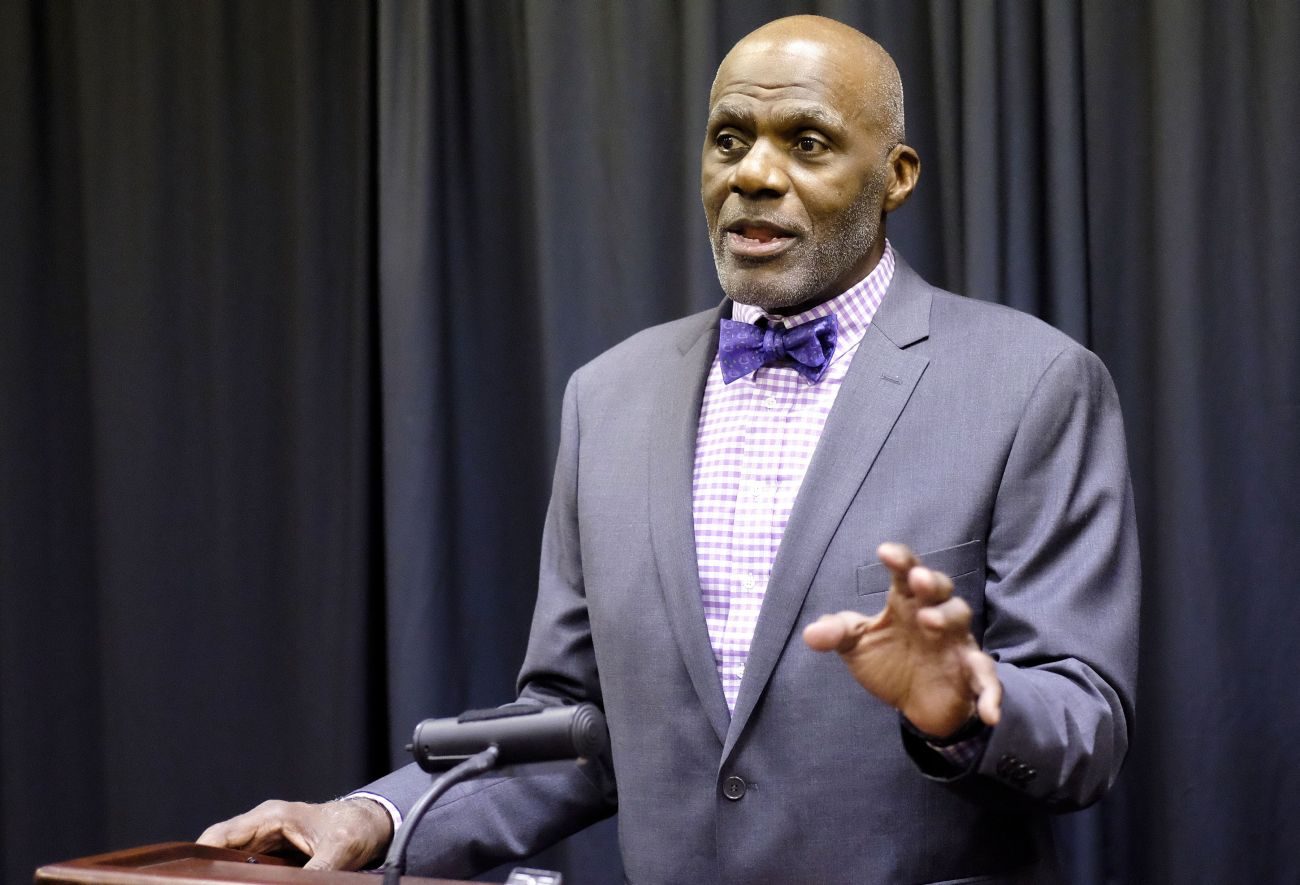 Former Minnesota State Supreme Court Justice and NFL Hall of Fame inductee Alan Page speaks at a Sept. 22 news conference prior to the Siouxland Chamber of Commerce 31st annual dinner in Sioux City, Iowa. In his dinner keynote, he talked about the role of his Catholic faith in his life. (CNS photo/Jerry L Mennenga, The Catholic Globe)

SIOUX CITY, Iowa (CNS) — Former pro football player and Minnesota judge Alan Page offered a simple premise on how his faith is exemplified in his life.

“Try to do good; try to avoid evil,” said the graduate of a Catholic high school and Catholic university.

He made the comments as keynote speaker at a recent dinner in Sioux City.

Sporting a colorful bow tie that set off his white/gray speckled beard, and speaking deliberately and unpretentiously about his life, Page gave credit to his parents for instilling in him the importance of education.

“I am the person that I am today, interested in education, because of my parents’ belief to seek excellence in anything you do,” he said, at a news conference prior to the region’s annual chamber of commerce dinner.

When asked who would be most proud of their son today, his mom or dad, Page responded without hesitation. “Both of them,” he said in earnest. “Both of them.”

Page’s working-class parents moved to Canton, Ohio, when their youngest son, Alan, was 9.

“Our parents, my mother (Georgianna) in particular, were very strong on making sure we got educated,” Page told the Chicago Tribune in 1988. “She realized early on that was the key to the only way out to a better life. She had the perception that the education at Central Catholic (High School) was better than the public schools. She thought it was important even in the face of paying tuition.”

In his Sept. 22 keynote, Page noted sports were never at the top of his wish list for his life.

“People would ask me in fourth grade what I wanted to be and I would reply, ‘A lawyer,'” he said, then modestly smiled and added, “I guess I watched too many Perry Mason shows.”

However, in ninth grade, Page decided to follow his older brother on to the gridiron and soon discovered he had an aptitude for the game. He verified the claim that he worked on a construction team that erected the building that houses the Pro Football Hall of Fame in Canton, Ohio — where he was inducted in 1988.

Following his 1963 high school graduation, a scholarship enabled Page to pursue his collegiate studies at the University of Notre Dame. He was a member of the Fighting Irish football team that won the 1966 national championship.

After graduating from Notre Dame with a bachelor’s degree in political science in 1967, Page was a first-round draft choice of the Minnesota Vikings. He was named NFL Most Valuable Player in 1971, becoming the first defensive player to garner that award.

During his football career, Page started law school. He earned his law degree from the University of Minnesota Law School in 1978.

Page was an attorney in both private practice and at the attorney general’s office. In 1992, he was elected as a justice on the Minnesota State Supreme Court, the first African-American to serve on that court. Page reached the mandatory court retirement age of 70 in 2015.

In 1988, Page and his wife, Diane Sims Page, established the Page Education Foundation of Minneapolis, a nonprofit, tax-exempt organization that assists students of color with post-secondary education. To date, the foundation has awarded more than $13 million in scholarships to more than 6,500 students.

Earlier this year, Page talked about the importance of education to students at Benilde-St. Margaret’s High School in St. Louis Park, Minnesota, as part of that school’s Black History Month celebrations.

Page, who experienced both segregation and integration, has concerns today about the justice system treating people of color more harshly.

“People of color are arrested more often, charged more often, stopped and searched more often, given longer sentences, higher bail and less fair trials,” Page said, citing a 1993 Minnesota Supreme Court study on the judicial system. “That hasn’t changed dramatically in the state of Minnesota; it hasn’t gotten any better across the country. We need to figure out how to treat everybody equally.”

NEXT: Oklahoma voters to consider if religious groups can get state funds