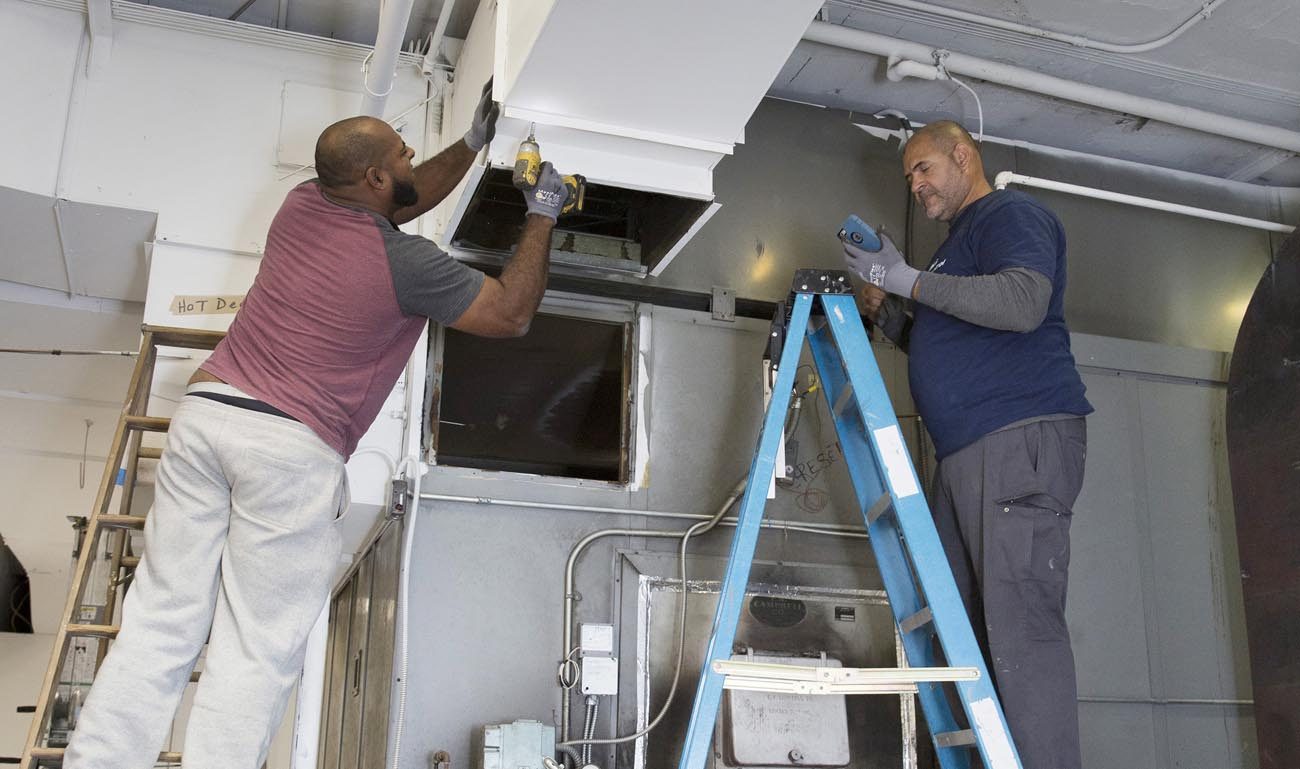 Workers remove an old heating and cooling system at Our Lady of Sorrows Church in Takoma Park, Md., Nov. 1. A parish debt relief program instituted by the Archdiocese of Washington to coincide with the Year of Mercy has enabled some parishes to move forward on pastoral programs and needed repairs and renovations. (CNS photo/Jaclyn Lippelmann, Catholic Standard)

WASHINGTON (CNS) — This past summer, on the days when the temperature topped 100 degrees, it was even hotter for the congregation gathered for Mass at Our Lady of Sorrows Church in Takoma Park, Maryland, because the building’s air conditioning system “was dying,” said Father Francisco Tovar, the new pastor there.

“People were not complaining at all,” the priest said, noting that some even joked that they were melting at Mass. The Washington suburban parish serves a diverse community of 1,600 members. Each weekend, nine Masses are celebrated in English, Spanish, French Creole and Ghanaian.

Relief is coming for the pastor and his parish, as Our Lady of Sorrows is installing a new heating and air conditioning system for the church. As it turns out, relief from the heat and the cold isn’t the only concern being lifted from the parish.

Earlier this fall, Father Tovar and the head of his parish finance council learned that Our Lady of Sorrows would be part of a new parish debt forgiveness program instituted by the Archdiocese of Washington for the Jubilee Year of Mercy. Thus far, 27 parishes are part of the program.

When Father Tovar learned that the archdiocese would be forgiving $341,797 of his parish’s debt, he said he was “speechless, very much moved and grateful.” The debt was in large part more than a decade old, long before he arrived; it had accumulated from unpaid parish assessments as the parish struggled to maintain its school, which eventually closed.

Now, as part of the terms for its debt being forgiven, the parish will pay $10,000 to the archdiocese to cover the remaining portion of the debt. “This parish really began anew because of this,” the priest said, noting parishioners offered Washington Cardinal Donald W. Wuerl heartfelt applause to express their gratitude when the archbishop celebrated Mass there in early October.

Father Tovar said that with its burdensome debt lifted, Our Lady of Sorrows Parish can install the new heating and cooling system in the church, and it can concentrate fully on its mission of loving and serving God and others through its worship, educational and outreach programs.

“This allows us to work every day now without thoughts of where to get the money,” he told the Catholic Standard, newspaper of the Washington Archdiocese. “We say, ‘Lord, here we are. You have freed us from the impossible. Now here we are, ready and willing to do what you ask for us.'”

Washington Auxiliary Bishop Barry C. Knestout said Cardinal Wuerl envisioned the parish debt relief program –- known officially as the Accounts Receivable Project –- as a way for the archdiocese to live out the vision of the Year of Mercy called by Pope Francis, and also to help carry out the goals of the Archdiocesan Synod.

The synod, which Cardinal Wuerl convoked in 2014 to mark the Archdiocese of Washington’s 75th anniversary, included a widespread consultative effort among parishioners across the archdiocese who put forward recommendations aimed at revitalizing parishes in the key areas of worship, education, community, service and administration and stewardship.

The results of the local synod — the first of its kind in Washington — dovetailed with Pope Francis’ call to “reflect on our work in context of the mercy of God,” said Bishop Knestout, the archdiocese’s vicar general and moderator of the curia. He noted that the idea of forgiving debt in jubilee years has deep biblical roots, including in Deuteronomy 15:1-2, which describes forgiving a neighbor’s debt every seven years.

Bishop Knestout said the idea behind the program “is to lift this burden hanging over the parish, so they have resources free to address the heart of parish life and activity … In this Year of Mercy, we’re giving the parish an opportunity to have a fresh start.”

Msgr. Charles Pope, the pastor of Holy Comforter-St. Cyprian Parish in Washington, which also was part of the debt relief program, noted: “There still remains the spiritual principle that in festive jubilee years, as we count our blessings, Christians ought to be mindful of the poor and the indebted and show forth mercy in forgiving crushing debt and burdens. Our gratitude therefore takes the form of generosity and mercy toward others, as God has shown these to us.”

In Msgr. Pope’s parish’s case, a debt of $101,313 was forgiven, with the parish agreeing to pay the remaining $25,000. Paying part of the debt shows respect for the parish’s dignity, the pastor said, adding, “but it also demonstrates mercy, by helping parishes make a new beginning.”

Much of that debt, which his parish has been trying to pay off in installments in recent years, dated back to a financial crisis from when the parish continued to operate its school with declining membership and could not keep up with archdiocesan assessments during that time, he said. A charter school in its former building continues to serve neighborhood children.

Parishes are required to pay a percentage of their offertory collections to cover their annual archdiocesan assessments, which support Catholic school tuition assistance for families across the archdiocese, and fund the archdiocese’s daily operations, and many ministries, including the Catholic Standard and El Pregonero newspapers and websites.

The 27 parishes offered debt relief by the archdiocese each had more than $100,000 in debts accrued over the years. Many of the debts were old and related to such issues as keeping a struggling school open or other financial obligations, such as repairs, construction or parish operating costs. Such costs had to be paid, leaving the assessments unpaid but still on the parishes’ ledgers.

To date, the archdiocese has forgiven $10.11 million of the debts, with each parish repaying a small portion of what was owed.

NEXT: Catholics say Lord’s invitation to mercy goes beyond end of jubilee year