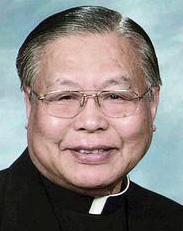 Father Joseph Dinh C. Huynh, 75, parochial vicar at St. Thomas Aquinas Parish in Philadelphia, died Nov. 30. He came to America as a refugee and served mostly among fellow immigrants from Vietnam and other countries in Philadelphia parishes for 36 years.

Born in North Vietnam, the son of the late Viet Cong Dinh and the late Thi Nhan Din, he was ordained April 2, 1967 by Archbishop Paul Nguyen Van Dinh at Notre Dame Cathedral Basilica in Saigon.

After the Vietnam War he was incarcerated at a work camp for Communist indoctrination. After his release he escaped via boat and ultimately came to Philadelphia in 1980. He began parish ministry almost immediately although he was not officially incardinated into the archdiocese until 1995.

“He was a very fine, holy servant, a caring man,” said Msgr. Hugh Shields, pastor of St. Thomas. “He made no bones about responding to the needs of all of the people. He visited the sick, and the Vietnamese community was especially very close to his heart. Without a question he is responsible for bringing many people in the church, he went door-to-door. He started the Vietnamese Mass in the parish and it just grew and grew.”

Chin Dinh, a leader among the Vietnamese community in the parish who arrived a few years before Father Huynh, agrees. He remembers in the beginning there were maybe 15 or 20 people coming to the Vietnamese Mass at St. Thomas and through Father Huynh’s effort now it is close to 300.

“He was loved by everyone,” Dinh said. “He established an Asian social services center and tried to help everyone adapt to a new society. He tried to help them learn English and he established various religious groups including the Legion of Mary and a thriving youth group.”

There will also be a 9 a.m. viewing on Wednesday, Dec. 7, followed by his 11 a.m. funeral Mass celebrated by Bishop Edward M. Deliman. Among the concelebrants will be Msgr. Shields, Msgr. Joseph T. Trinh and Father Joseph An P. Nguyen, who will be the homilist.

Father Trinh is survived by his sister-in-law, Thi Re Dinh, and many nieces and nephews. Interment will be at SS. Peter and Paul Cemetery, Springfield.