Media whip up ‘climate of fear’ against migrants, cardinal says 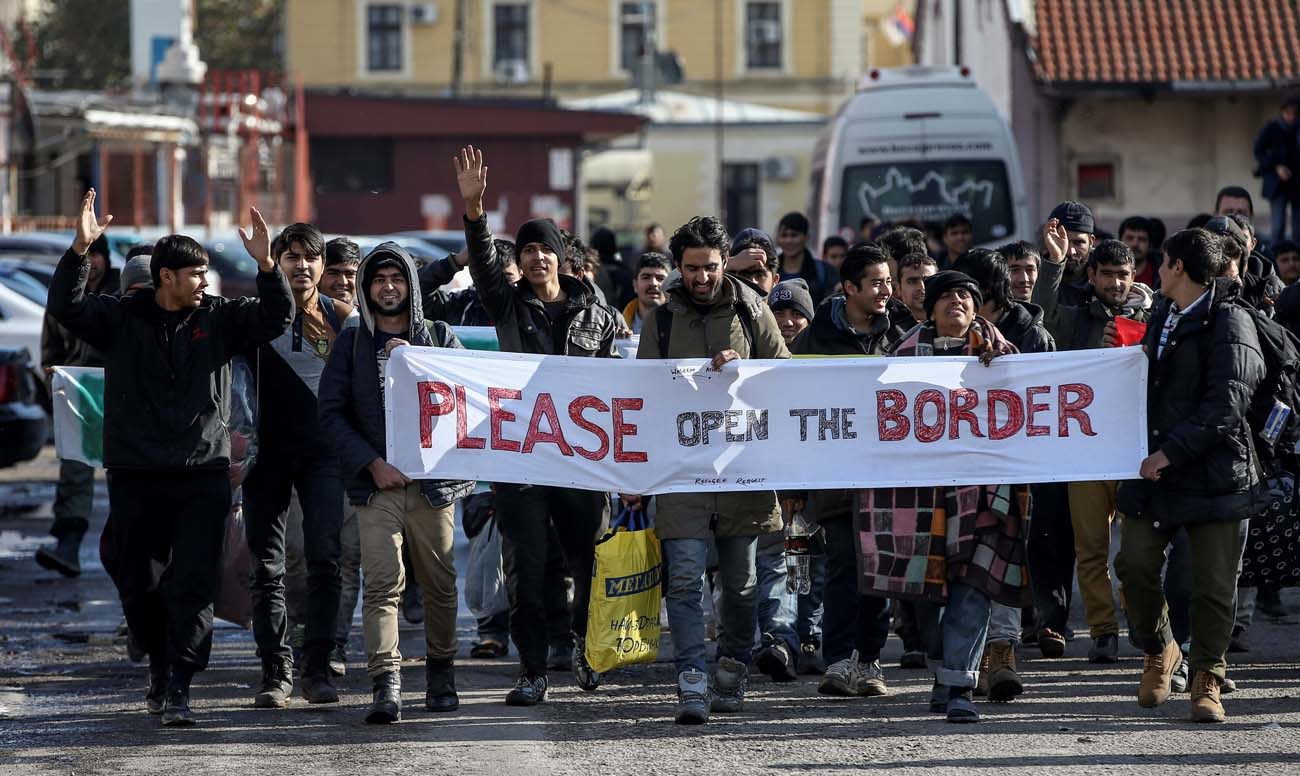 Refugees and migrants hold a banner and shout slogans Nov. 11 as they walk toward the Croatian border in Belgrade, Serbia. English Cardinal Vincent Nichols said some British media stirred up xenophobic sentiments against migrants and refugees. (CNS photo/Marko Djurica, Reuters)

LONDON (CNS) — Cardinal Vincent Nichols of Westminster said some British media were stirring up xenophobic sentiments against migrants and refugees.

The cardinal suggested that some media were guilty of fostering a climate of fear of refugees ahead of the June 23 referendum that resulted in a surprise vote for the United Kingdom to leave the European Union. He told a Nov. 18 press conference attitudes toward migrants had since hardened, making it harder for humane solutions to be found to the refugee crisis in the Middle East and the crisis of mass migration from Africa.

Speaking at a London press conference after an annual November meeting of the bishops of England and Wales in Leeds, Cardinal Nichols said: “We were concerned about the levels of intolerance, of attitudes hardening, of attitudes of exclusion.

“It is the fostering of a climate of fear that actually makes finding solutions more difficult,” said Cardinal Nichols, the president of the Bishops’ Conference of England and Wales.

“I believe that the constant repetition of the dangers of the risks of refugees and the constant putting into the public sphere of fear actually masks a deeper level of compassion that exists within many people in this country,” he said.

The cardinal said the bishops collectively “expressed our regret of the emergence of harder attitudes toward people who have migrated to be in this country and our regret at the way those views are given such ample expression, particularly in parts of the media.”

Cardinal Nichols added that inevitable economic consequences of Brexit — such as rising inflation, possible restrictions on trade with the European Union and the devaluation of British currency — would be felt “most keenly at the bottom of the economic ladders.”

He said the bishops of England and Wales would seek ways to offer practical help to poor people hit by such changes.

Cardinal Nichols insisted, however, that there had not been a significant number of attacks on European migrants despite the rising mood of xenophobia.

He said the bishops asked Polish Catholic chaplaincies for feedback after Polish President Andrzej Duda appealed to him following the Aug. 27 murder of Arkadiusz Jozwik, 40, who was beaten to death by a teenage mob in Harlow, England.

Duda urged Cardinal Nichols and Archbishop Justin Welby, leader of the worldwide Anglican Communion, to do whatever they could at the parish level to prevent such violence against Poles.

The Catholic chaplains reported that there was very little evidence of increased aggression against Polish nationals living in Britain, saying most of them felt “welcome and secure,” Cardinal Nichols said.

“From the chaplains’ point of view, they have a very, very low count of acts of aggression or violence toward the Polish community,” he said.

“They are well-informed about what is happening on the ground,” Cardinal Nichols continued. “This led us to reflect on the manner of the referendum and some of the consequences of the vote.”

Ahead of the referendum, most of the British national newspapers — including the best-selling tabloids and titles normally supportive of the ruling Conservative Party — were openly in favor of Brexit.

Earlier in November, the Manchester parish of St. Monica in the Diocese of Salford became the first Catholic parish in England to help to find a home for a Syrian family in response to the appeal of Pope Francis for churches to welcome refugees.