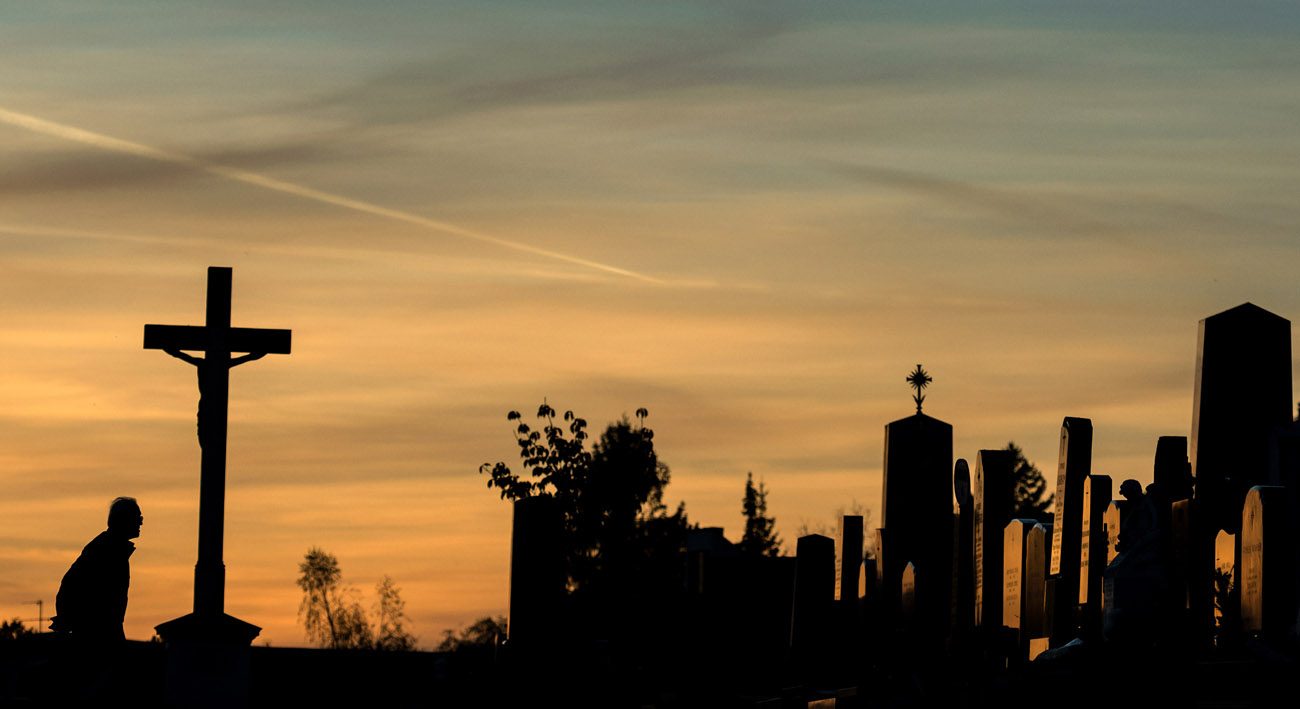 A man stands in front of graves in Vienna Nov. 1. During a Nov. 4 Mass at the Vatican, Pope Francis urged people to remember cardinals and bishops who died this year. (CNS photo/Christian Bruna, EPA)

VATICAN CITY (CNS) — Praying for cardinals and bishops who died in the past year, Pope Francis urged people to remember the priestly witness they gave.

Some of the bishops, he said, had been “called to witness to the Gospel in a heroic way, enduring heavy tribulation.”

The Vatican booklet for the Mass Nov. 4 listed by name the seven cardinals and 136 bishops from around the world who died since Oct. 25, 2015. The deceased included five bishops from mainland China, all of whom had served time in prison or labor camps because of their ministry.

The deceased cardinals and bishops, Pope Francis said, were pastors who dedicated their lives to serving the people entrusted to them. They offered the sacraments, preached the Gospel and, with a father’s love, “tried to love everyone, especially the poor, the defenseless and those in need of help.”

“In the name of the God of mercy and forgiveness, their hands blessed and absolved,” the pope said. “Their words comforted and dried tears; their presence witnessed eloquently that the goodness of God is inexhaustible and his mercy is infinite.”

Remembering the deceased cardinals and bishops, he said, Catholics give thanks to God for their gift of their lives and confidently pray that God would welcome them into his kingdom.

The Catholic Church’s special emphasis during the month of November on prayers for the dead not only is an encouragement to remember those who have gone before us, he said, but it also is a reminder that earthly life will end in eternity with a definitive encounter with the Lord.

The Christian faith urges believers to trust firmly that God is “a judge whose characteristics are mercy and compassion.”

The journey toward God, he said, “begins for each of us on the very day we open our eyes to the light and, through baptism, to grace.”

For priests and bishops, an important stage of the journey “is the moment in which we say ‘Here I am’ during our priestly ordination,” he said. “At the hour of our death, we will pronounce our last ‘Here I am’ united with that of Jesus, who died entrusting his spirit to the hands of the Father.”

PREVIOUS: Cardinal Nichols apologizes to unmarried women coerced to give up babies

NEXT: Pope issues new statutes for Pontifical Academy for Life