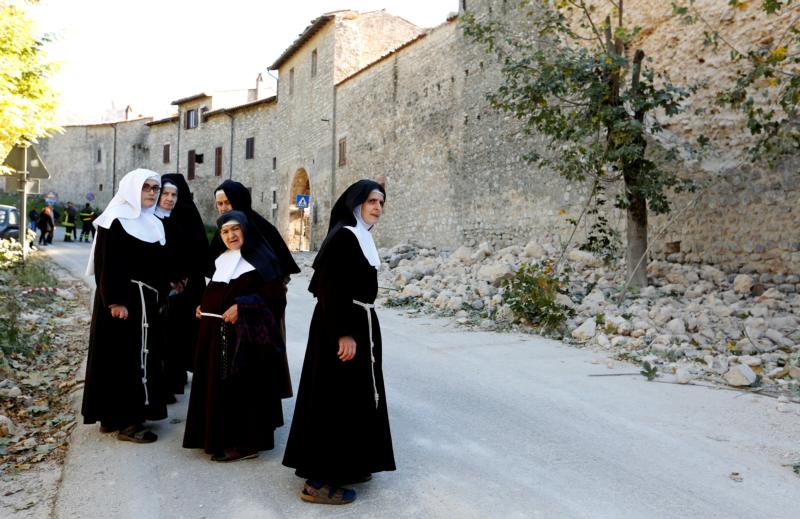 VATICAN CITY (CNS) — When the Benedictine monks in Norcia led residents in prayer before the ruins of their medieval city, they showed one way the church steps into action in times of crisis.

First responders encouraged the religious, recognizing they could do their job better when the distraught receive emotional or spiritual rescue, too. SOS, after all, means “save our souls.”

In fact, the one disaster that cameras don’t easily capture is the shattering of people’s resolve and the collapse of courage when everything they have is gone.

“Certainly the crumbled walls and the missing roofs” are a problem, Archbishop Renato Boccardo of Spoleto-Norcia said, but the most serious concern is the people — “people who have been living for two months in a state of continual fear and worry and are under considerable psychological stress and losing hope.”

He told Vatican Radio the day after the Oct. 30 tremors that the people he talks to are tired of starting over; some have rebuilt their homes twice already from past quakes.

“The temptation to give up is there,” he said, and the church’s job is to “sustain hope, listen to people vent and dry their tears.”

As central Italy quaked, a city further north was celebrating its own rebirth from ruin and honoring the perseverance and selflessness of those who helped save it.

Florence — the cradle of the Renaissance — was commemorating the 50th anniversary of the day the Arno River burst its banks Nov. 4, 1966.

Water, silt and debris smashed into septic systems and tanks of fuel oil and gas, creating a black-brown sludge that permeated priceless works of art, books and manuscripts. Rushing waters 20 feet high carried away roads, cars and supplies, and filled homes and businesses with oily muck.

The disaster prompted hundreds of students, workers and professionals to go help the city, earning them the name, “the mud angels.” Some of their testimony and details were published in the Vatican newspaper, L’Osservatore Romano, and on internet news sites.

Cardinal Gualtiero Bassetti of Perugia-Citta della Pieve was among the mud angels, according to the Vatican newspaper.

He was a 24-year-old priest who had been ordained in Florence just two months prior. He and a handful of teenagers broke into a garage where tanks of acetylene were illegally stored. With the water quickly rising, they pulled out the tanks to lessen the potential and power of an explosion, he said.

Cardinal Giuseppe Betori of Florence, who was 19 at the time, said seeing “the suffering, the loss on the Florentines’ faces” was unforgettable.

He and many other seminarians and young priests studying in Rome went to Florence with the encouragement of their rector who believed the experience would be “formative.” In fact, the cardinal told the Italian news agency ANSA, it turned out to be a course in theology “with a shovel in my hand.”

They slept in a theater and wore boots and overalls like all the other volunteers, he said.

While media attention buzzed around those salvaging books from the national library in the historic center, the seminarians were assigned to the outskirts of town to help a working class neighborhood, Cardinal Betori said.

For those folks, “we really were angels,” he said, “unexpected apparitions, a presence that was a pure gift.”

He said he’s “proud to have been among the people and not the books, not to diminish the importance of culture, especially in Florence, but it seems to me that for a seminarian, a priest, a bishop, it is much more important to be able to say ‘I served the people.'”

He helped residents dig through the sludge for their precious possessions, like a metal box filled with a married couple’s love letters. Hit with a bad case of the flu, he ended laid up on a cot for a week, “doing nothing more for Florence” until Pope Benedict XVI appointed him archbishop of the city in 2008.

Now, he says, he always recalls “that the first staff I held in my hand in Florence was the handle of a shovel. It helps me, let’s say, stay measured” when he processes into church with a pastoral staff in hand, reminded of “those days filled with mud and water.”

Cardinal Betori was to lead a Mass Nov. 4 at the Church of Santa Croce, together with other prelates who had been “mud angels” in their youth.

L’Osservatore Romano said three Italian cardinals and at least six bishops had been “mud angels.” Indian Cardinal Telesphore Toppo of Ranchi, then a 27-year-old theology student in Rome, even contributed by donating blood.

Responding to Italy’s latest disaster — the series of earthquakes — Archbishop Boccardo has organized a “task force of hope,” assigning available priests to live among those left homeless.

One of his priests, Father Marco Rufini, has been living in a car like other townsfolk in Norcia. He told Vatican Radio Nov. 1 that even though the town has lost its churches, “the house of God isn’t the walls but the people.”

If people are on their knees in sorrow or pain, then the church needs to kneel down with them — “to work on that edifice made of living stones,” he said.

PREVIOUS: All Souls feast is a hopeful reminder of the resurrection, pope says

NEXT: All people long for mercy, pope tells religious leaders