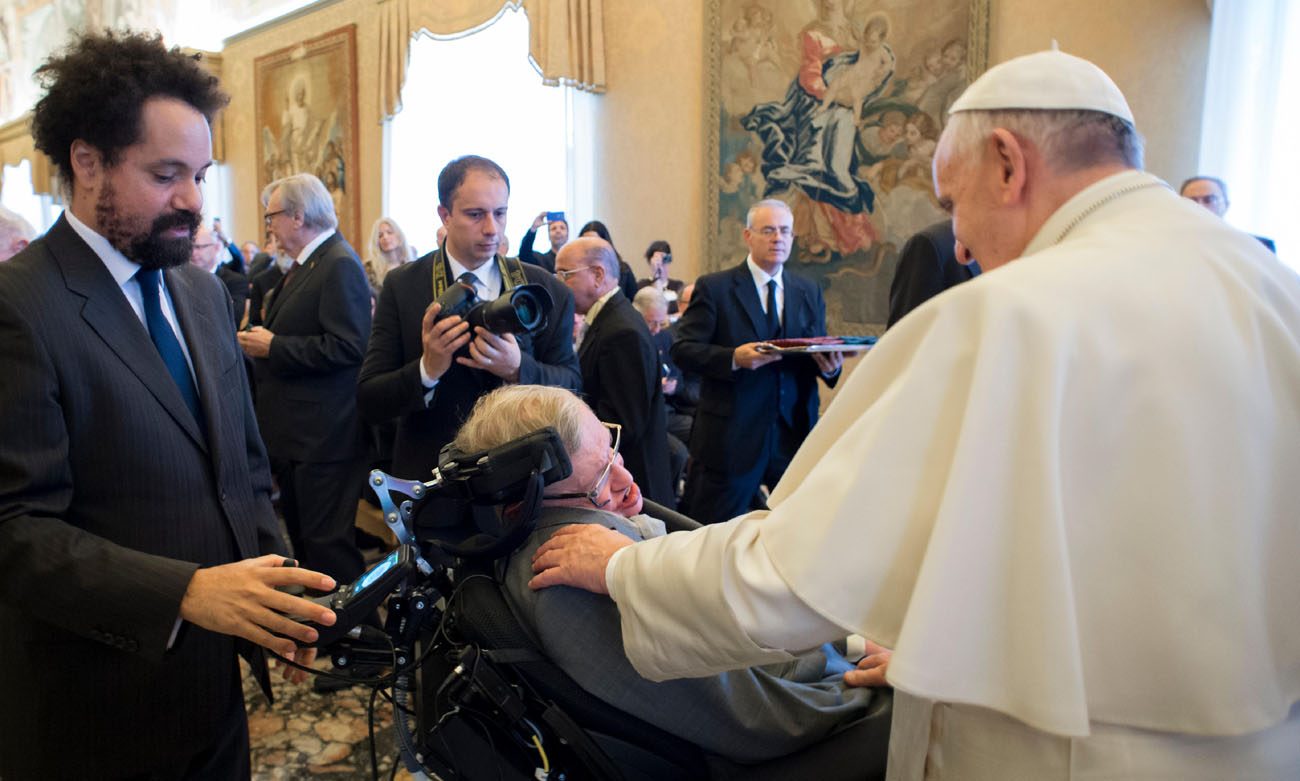 Pope Francis greets British theoretical physicist and cosmologist Stephen Hawking, during an audience with participants attending a plenary session of the Pontifical Academy of Sciences at the Vatican Nov. 28. (CNS photo/L'Osservatore Romano, handout)

VATICAN CITY (CNS) — Humanity does not own God’s gift of creation and has no right to pillage it, Pope Francis said.

“We are not custodians of a museum and its masterpieces that we have to dust off every morning, but rather collaborators in the conservation and development of the existence and biodiversity of the planet and human life,” he said Nov. 28.

The pope addressed experts attending a plenary session of the Pontifical Academy of Sciences Nov. 25-29 to discuss the impact of scientific knowledge and technology on people and the planet.

People in the modern world have grown up “thinking we are the owners and masters of nature, authorized to plunder it without any consideration for its secret potential and evolutionary laws, as if it were an inert substance at our disposal, causing, among other things, a very serious loss of biodiversity,” he said.

An “ecological conversion” is needed in which people recognize their responsibility for caring for creation and its resources, for trying to bring about social justice and for overcoming “an unfair system that produces misery, inequality and exclusion,” the pope said. In fact, with sustainable development, the tasks of taking care of both people and the planet are inseparable, he said.

The pope said there was a “weak response” in most international policies to promoting the common good.

He lamented how easily well-founded scientific counsel is “disregarded” and how politics tends to obey technology and finance instead.

The proof of that, he said, is the way countries are still “distracted” or delayed in applying international agreements on the environment as well as the “continuous wars of dominance masquerading as noble declarations that cause increasingly serious harm to the environment and the moral and cultural wealth of peoples.”

Pope Francis told the scientists that it was up to them to “build a cultural model to tackle the crisis of climate change and its social consequences so that enormous productive capacities are not reserved only to the few.”

To do that, he said, the scientists would have to be free of political, economic and ideological interests, too.

Because scientists have been able to study and demonstrate many crises facing the planet, the pope called on them to be leaders in proposing solutions to the many problems, such as water, energy and food security.

He said it would be “indispensable” for the world’s scientists to collaborate and create “a regulatory system that includes inviolable limits and guarantees the protection of ecosystems before new forms of power derived from the technological-economic paradigm produce irreversible damage not just to the environment but also to coexistence, democracy, justice and freedom.”

NEXT: Pope speaks to Jesuits about discernment, vocations, poverty