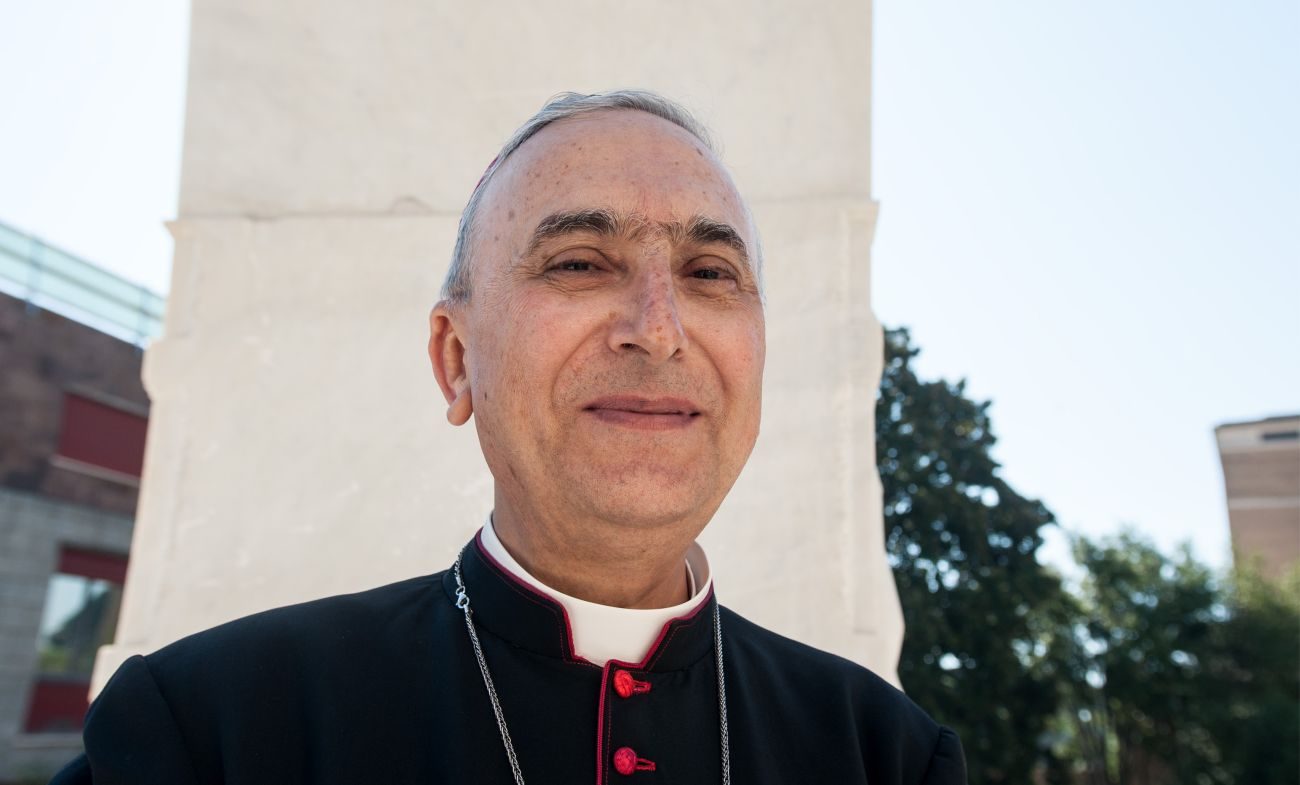 Italian Cardinal-designate Mario Zenari is pictured in a Sept. 29 photo. Cardinal-designate Zenari, who has been nuncio to Syria since 2008, will be one of 17 new cardinals consecrated by Pope Francis at a Vatican consistory Nov. 19. (CNS photo/Massimiliano Migliorato, Catholic Press Photo)

VATICAN CITY (CNS) — As nuncio to Syria, Cardinal-designate Mario Zenari resides in Damascus. Even though the city does not come under attack as much as Aleppo, there are constant mortar attacks, and it makes him think of the nation’s children.

If the attacks make him scared, he told Vatican Radio, he can only imagine what the children are experiencing, especially when so many experience much worse, like “seeing homes collapse on top of them, having to flee because their home or village was destroyed.”

He has said that by choosing to give him a red cardinal’s hat, Pope Francis was not only honoring the people and the steadfast presence of a papal representative in the war-torn nation.

“It’s a gesture of love for the martyred Syrian population and it is also a gesture of supporting diplomacy,” Cardinal-designate Zenari told SIR, the news agency of the Italian bishops’ conference.

Since 2008, Cardinal-designate Zenari has served as the pope’s representative in Syria, where armed conflict eventually emerged out of the escalating unrest following the 2011 Arab Spring. The conflict involving government forces, jihadist rebel factions and the so-called Islamic State has left nearly half a million people dead, according to the Syrian Center for Policy Research and, according to the U.N. refugee agency, UNHCR, at least 7.6 million people have been displaced internally and more than 4 million people fled the country.

“It’s well noted that the Holy See has always maintained diplomatic relations during this period” and now, by elevating “his ambassador to the dignity of cardinal, (the pope) is giving additional value to this presence and to the diplomatic efforts aimed at resolving the crisis,” he said.

“Even if I am Italian, as the nuncio, my homeland is Syria. A son cannot tear himself away from his mother’s bedside when she is sick or dying — that is why I stay,” he told Vatican Insider Oct. 11.

He also told Vatican Insider that, in Damascus, “everything is polluted, the air, the water, the land. And the people who escape the bombings or the chemical weapons attacks live under another kind of bombing — poverty, which hits 80 percent of the people. Half of all the factories and hospitals have been destroyed.”

When Pope Francis announced the creation of 17 new cardinals Oct. 9, the nuncio’s name was first on the list. The pope also made a point of adding that the prelate would “remain apostolic nuncio to the beloved and martyred Syria.”

With other countries closing so many diplomatic missions over the past few years, the pope’s gesture underlined that “staying on, on site, is important,” the diplomat told AsiaNews the next day.

The 70-year-old prelate said he heard the announcement while he was having lunch with family and friends in his hometown near Verona, Italy.

“I knew nothing” about the appointment, he said. He heard the news from his brother-in-law during lunch after Mass. “At first, I didn’t want to believe it,” he told AsiaNews.

The cardinal-designate has said the world community and Syrian powers need to do everything possible “because the people are suffering.” Unfortunately, the lack of willingness “is not so much an uphill struggle, but it seems that in these conditions, (it) is almost a cliff, like climbing a wall” to get a negotiated solution.