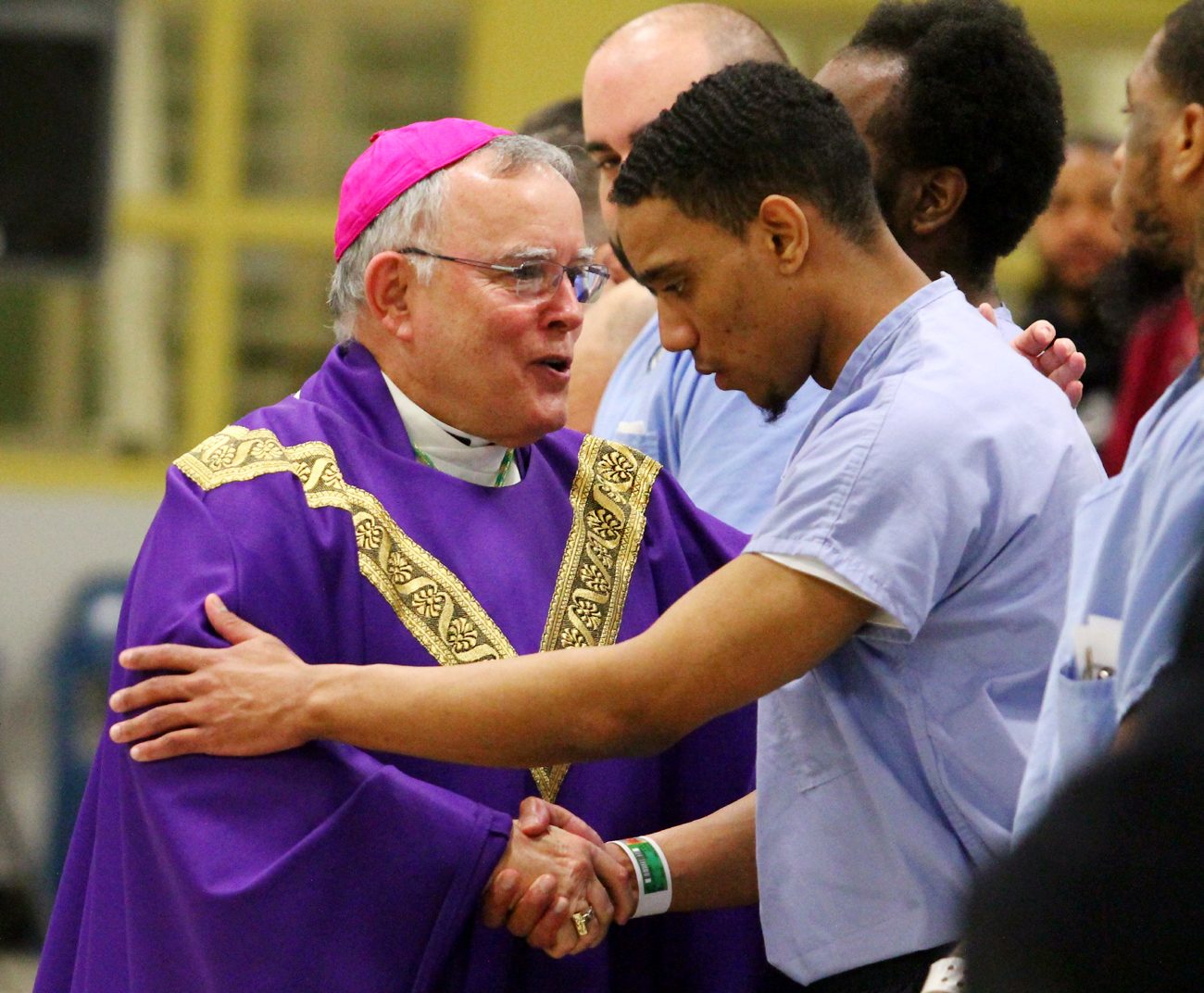 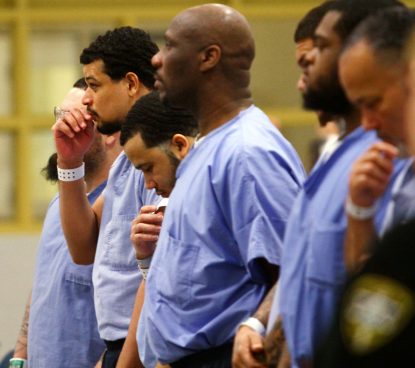 Men pray during a Mass celebrated Dec. 15 by Archbishop Charles Chaput during his visit to Curran-Fromhold Correctional Facility in Philadelphia. (Sarah Webb)

To visit the imprisoned is right up there in the corporal works of mercy, and what better time to do it than in the Christmas season, a time when shut-ins and prisoners can feel most abandoned?

Archbishop Charles Chaput took time out from his busy schedule on Thursday, Dec. 15 to celebrate Mass at the Curran-Fromhold Correctional Facility, the largest unit of the Philadelphia prison complex along State Road in Northeast Philadelphia.

In addition to a representative group of prisoners in attendance were staff members including Prison Commissioner Blanche Carney and Curran-Fromhold Warden Gerald May, as well as volunteers who minister in the prison complex.

It was not Archbishop Chaput’s first visit to the facility. Previous visits   included accompanying Pope Francis to the prison during his visit to Philadelphia 14 months ago.

As a matter of fact, the chair from which the archbishop presided was the same chair that was lovingly restored by inmates and used by Pope Francis during his visit.

“We believe Christmas is important,” Archbishop Chaput told his congregation in the prison gymnasium, “because it is the birthday of Jesus. The first Christmas was the most important day in history.”

During his homily, Archbishop Chaput nicely tied the Scriptures of the day into the occasion. During the first reading taken from Jeremiah, he explained it was written at the time when the Jewish people themselves were captives. “The Jews were taken as slaves, as prisoners to Babylon,” he said.

He quoted from the Gospel reading taken from Luke and said, “All of the people who listened including the tax collectors acknowledged the righteousness of God, but the Pharisees and scholars of the law, who were not baptized by him, rejected the plan of God for themselves.”

Archbishop Chaput emphasized all people are sinners, and he told the inmates, “the people who will go to heaven are people like you.”

His words were not lost on the assembly. 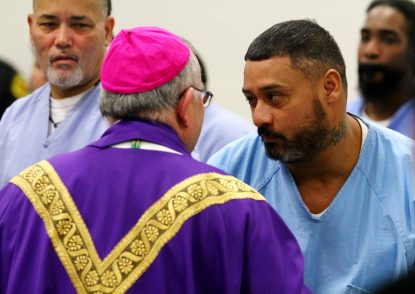 Prisoners chat with Archbishop Chaput during his Dec. 15 visit to Curran-Fromhold. (Sarah Webb)

“I loved the blessings, I loved the homily,” said Ricky, one of the inmates. “Jesus Christ was born on a day like today.”

Steve, another inmate, was reminded of the visit by Pope Francis. “I was here, I met him,” he said. “It was awesome, a once-in-a-lifetime priceless moment in my life.”

On the other hand, David, another inmate, said this was the first time he had been to such a gathering, and he enjoyed it.

Wilson went further, saying he had never before been to any Catholic service in his entire life. “It was special, the archbishop’s words were inspiring,” he said.

NEXT: Archbishop Chaput wishes all a joyous Christmas