In Advent, the faithful pray special prayers at Mary’s shrine 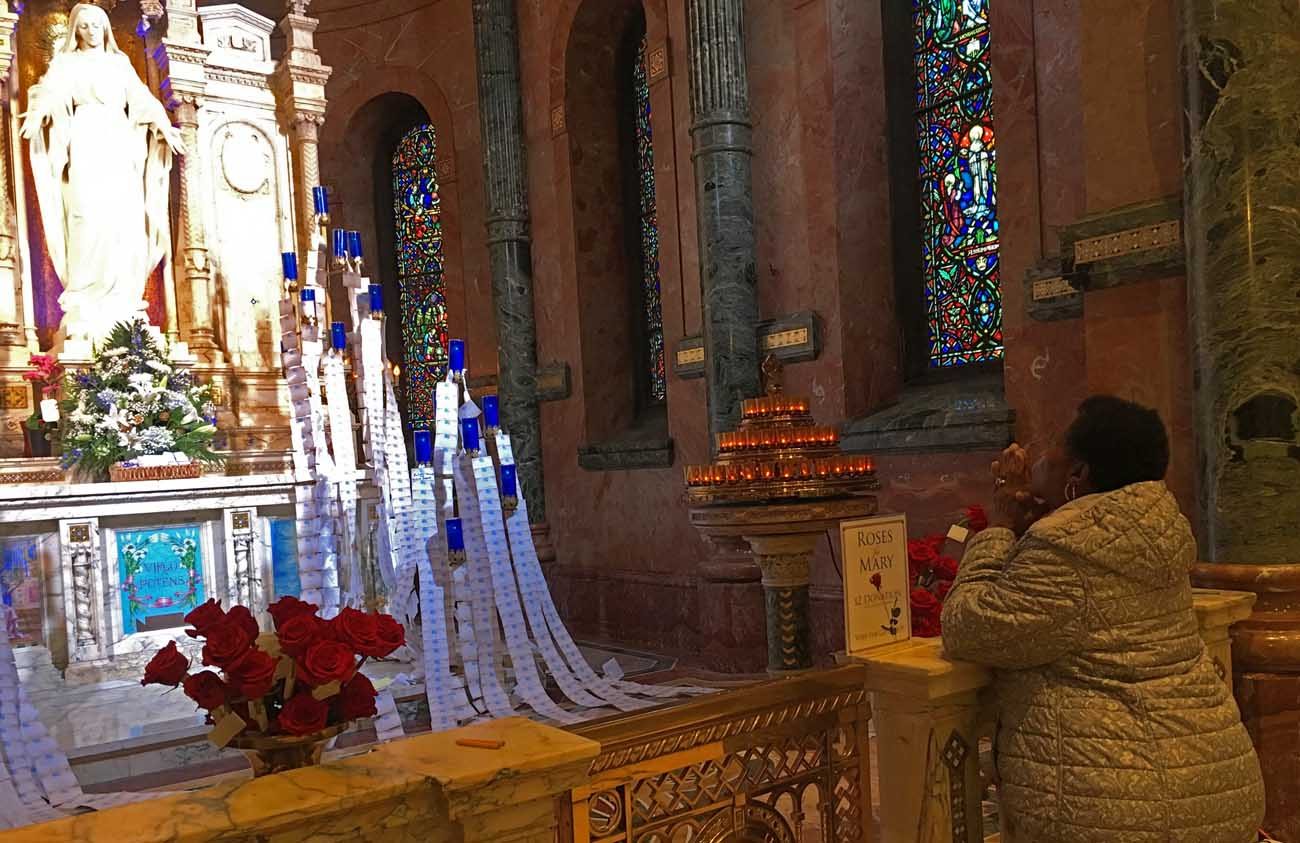 Mary Kwedu of St. Ignatius Parish in West Philadelphia joins her prayers with those of many others this Advent at the shrine to Mary at Germantown's Miraculous Medal Shrine. 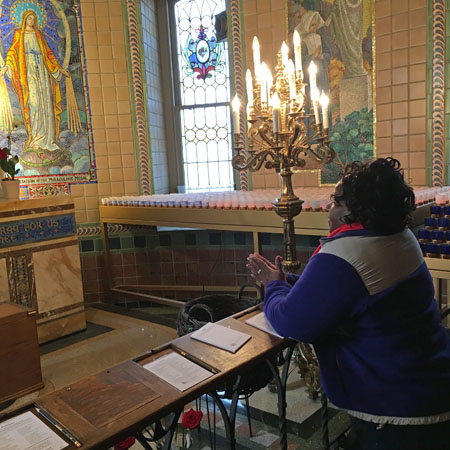 Terry Epps of St. Athanasius Parish in West Oak Lane prays in thanksgiving for favors received after she prayed a novena during a particularly hard time.

Many faithful engage in special prayers during the Advent season while others pray the rosary, engage in a novena or attend daily Mass more frequently in the weeks before Christmas.

This is the tradition in homes and churches throughout the region, but especially at the beloved Shrine of the Miraculous Medal in the Germantown section of Philadelphia.

Advent comes from the Latin word “ad-venire” which means “to come to.” It includes the four Sundays, along with the interim weekdays, leading up to Christmas. Since this year Christmas falls on Sunday, Dec. 25, this year’s Advent season runs from Sunday to Saturday for four full weeks, according to the church’s liturgical calendar.

Among those who love seeing the four candles of Advent lit are Heather Wright and Janette DuBose. Wright, a member of St. Vincent de Paul Parish in Germantown, converted to Catholicism 36 years ago.

DuBose attends Advent Masses at the shrine because her work schedule in Northwest Philadelphia often conflicts with Masses at her parish church close to her Southwest Philadelphia home. She is a cradle Catholic who says, “There is just so much love, strength and openness here.”

“This is why I joined this church. Most of the people I know in the African American community are Baptist and they do not know the Catholic love that feels like ‘kumbayah.’

“I always look forward to the third candle of joy. We all could use some joy. This is a season when you think about those who need hope. This is a place where the people rally around you when you are hurting,” Dubose said after a recent Advent Sunday Mass.

Advent is one of DuBose’s favorite liturgical seasons because for her it is a time for intense prayer. So while many are decorating and shopping one can find her in one of many Catholic churches along a SEPTA bus route from one end of Philadelphia to another.

“I use Advent as a time to prepare spiritually for Christmas by doing many rosaries,” said DuBose, who has a special devotion to Our Lady of Guadalupe, whose feast was celebrated Dec. 12. “When you work hard, take care of a family, and have other things to get done, you have to prepare. I take the time to prepare my mind and my heart.

Among the devotions many Catholics put up is the Advent wreath. This holds four candles, three purple and one pink, and one is lit on each Sunday of the season until all are lit on the Fourth Sunday of Advent (this year on Dec. 18). The candles represent the expectation and joy of preparing for the birth of Jesus Christ at Christmas.

Mary Kwedu is an American citizen who emigrated from Ghana. She is a member of St. Ignatius Parish in West Philadelphia. She repeats the Solemn Novena prayers of the Miraculous Medal Shrine in Germantown, which was celebrated in November, during her Advent journey. She believes in the power of novena prayers and often invites her friends of other faiths to join her.

“You don’t have to be Catholic to be blessed by doing novenas,” Kwedu said. “You don’t have to just do novenas during the Solemn Novena in November either. There is great power in the novena prayers all year round.”

Kwedu said that during a previous Advent she spent many hours praying for her daughter. While back in Africa her mother’s funeral she learned her daughter, who was still in the United States, was giving birth. Complications threatened her daughter’s life.

Kwedu prayed fervently and begged the Lord to save her daughter. Those prayers, she said, were answered.

Nine years ago Terry Epps, a parishioner of St. Athanasius in West Oak Lane who worships at St. Benedict Church, had many needs to pray for during the Advent season. She continues to stay in a reverential mode of prayer and preparation because of the blessings she received.

A month after she retired from work her husband went to work, had a heart attack there and died almost immediately. He had no insurance or pension. She had to wait for her retirement income paperwork to be processed, and so she was temporarily without any income.

“I didn’t know what I’d do because they said it would be several weeks before I’d get my first check,” Epps said. “I came here (to the shrine) to pray the novena. When I got home my husband’s job told me they would continue to give me his paychecks until I got my money all the way to the end of year, around Advent.”