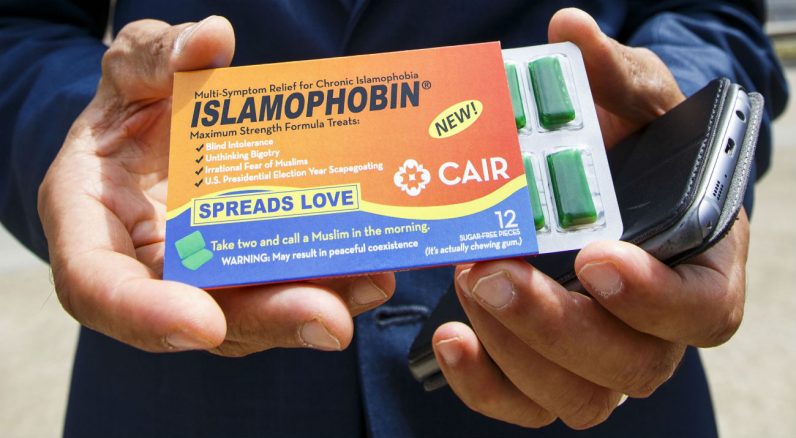 A man near the Republican National Convention in Cleveland in July holds a pack of chewing gum called ‘”Islamophobin.” The packaging attempts to bring attention to the issue of anti-Muslim attitudes in the United States. (CNS photo/Justin Lane, EPA)

WASHINGTON (CNS) — Catholic organizations and other faith groups say they are happy with the Obama administration’s last-minute decision to end a type of national Muslim registry.

The National Security Exit-Entry Registration System, known as NSEERS, began under the George W. Bush administration following the 9/11 attacks and asked that men from some countries in the Middle East register with the U.S. government when they arrived in the U.S. It continued during President Barack Obama’s two terms in office even as organizations, including Catholic groups, have long called for its demise.

In late December, weeks before his administration comes to a close, Obama announced that the program was ending under his watch.

“I’m glad the president took action to end a program that by all accounts wasn’t effective and undermined core American values,” said John Gehring, the Catholic program director at Faith in Public Life, an advocacy group in Washington.

Catholic Legal Immigration Network Inc., known by the acronym CLINIC and based in Silver Spring, Maryland, said the decision was a victory.

“Not only was it discriminatory” and failed to lead to the capture of terrorists, said CLINIC Executive Director Jeanne Atkinson in a Dec. 22 news release, but also it broke apart families as people were deported, some for causes such as being a day late after having to tend to an emergency.

While the program asked that immigrants from North Korea also register, NSEERS “in effect targeted immigrant Muslims,” said Jordan Denari Duffner, a research fellow at Georgetown University’s Bridge Initiative, which seeks to educate others about Islamophobia as well as raise awareness about prejudice and discrimination toward Muslims.

Some see the end of the registry as a way to make it difficult for an incoming Donald Trump administration to target Muslims through such a program but others warn that the president-elect’s public views during the campaign signal tough days ahead for Muslims in the country, with or without a registry.

“Throughout the campaign, and since, Trump and his advisers have demonstrated that they see the religion of Islam as a primary source of violence and terrorism,” said Duffner. “But they also want to avoid charges of religious discrimination. Things like NSEERS and ‘extreme vetting,’ rather than a ‘Muslim ban,’ allow Trump’s administration to still focus on Muslims without running into constitutional issues or a major public outcry.”

The president-elect campaigned by saying his “extreme vetting” of Muslims and other immigrants would provide a way to keep the country safe. The way Duffner sees it, what’s been referred to as extreme vetting “would operate in a similar way to NSEERS in that it would target Muslims in a non-explicit way. The immigration questionnaire that the Trump team has been discussing is based on anti-Muslim stereotypes. … The extreme vetting policy might sound more nuanced and acceptable than a Muslim ban but as it’s been discussed, it could have the same impact.”

So, even as groups hailed the decision, some said they would remain vigilant.

“People of faith and diverse religious leaders in pulpits across the country are now organizing to stand with Muslims and other vulnerable communities who feel threatened by President-elect Trump’s incoming administration,” said Gehring.

NEXT: New York cardinal to participate in Trump inauguration