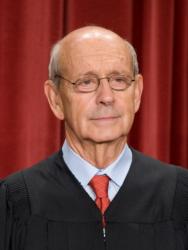 Breyer was the lone dissenter in a three-page opinion specifically highlighting what he described as “cruel and unusual punishment” inflicted on inmate Henry Sireci, who has spent 40 years on death row and continues to argue that his conviction was based on flawed evidence and false testimony.

Breyer, who has been critical of the death penalty before, said the time a prisoner waits before an execution had been described as “one of the most horrible feelings to which he can be subjected.”

He pointed out that such delays are becoming more common, but said in this case, 40 years on death row is truly exceptional. When Sireci was first sentenced, he wrote, “the Berlin Wall stood firmly in place. Saigon had just fallen. Few Americans knew of the personal computer or the internet. And over half of all Americans now alive had not yet been born.”

Sireci, now 68, was sentenced to death in the 1976 murder of a used-car dealer in Orlando, Florida. During the past 40 years, he has filed multiple appeals to his conviction charge.

Last year, Breyer was joined by Justice Ruth Bader Ginsburg in his dissent on the court’s decision to uphold Oklahoma’s lethal injection protocol. Breyer noted that the court should take another look at the constitutionality of the death penalty and pointed out that 137 countries have abolished the practice, leaving the United States in 2013 to be one of only 22 countries in the world to carry out any executions.

In the Sireci case, the justices in the majority, following custom, did not give their reasons for rejecting it.

In his dissent, Breyer wrote: “Individuals who are executed are not the ‘worst of the worst,’ but, rather, are individuals chosen at random, on the basis, perhaps of geography, perhaps of the views of individual prosecutors, or still worse on the basis of race.”

Sireci is white, but statistics show that the odds of a convicted murderer receiving a death sentence are nearly four times higher if the defendant is African-American.

Breyer also wrote that he would have reviewed other death penalty appeals the court rejected this year.

He noted that the number of yearly executions has fallen from its peak of 98 in 1999 to 19 so far this year, but that the average period of imprisonment between death sentence and execution has risen.

“Nor is this case the only case during the last few months in which the court has received, but then rejected, a petition to review an execution taking place in what I would consider especially cruel and unusual circumstances,” he wrote.

Breyer gave the example of Ohio death-row inmate Romell Broom, an African-American, who received a botched lethal injection in 2009.

“The state now wishes to try to execute Broom once again. Given its first failure, does its second attempt amount to a ‘cruel and unusual’ punishment?” he asked.

Breyer’s dissent did not address the court’s ruling in January that Florida’s death-penalty sentencing process was unconstitutional because it gave too much authority to judges, instead of juries.