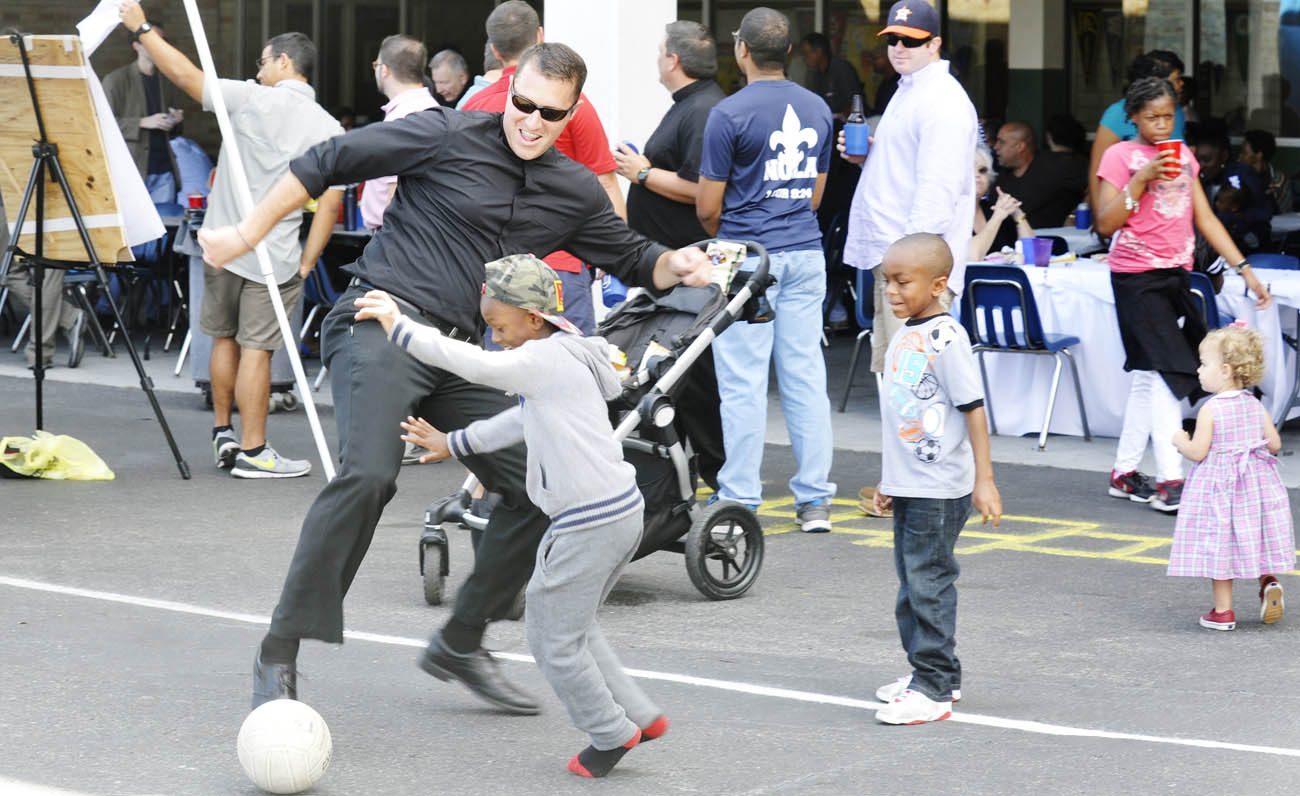 Blake Dubroc, studying for the priesthood for the Diocese of Lafayette, La., plays soccer in New Orleans with a child at the St. Rita Parish picnic Oct. 9. (CNS photo/Peter Finney Jr., Clarion Herald)

NEW ORLEANS (CNS) — It was 10:10 a.m. on Sunday, Aug. 28 — 20 minutes before the regular 10:30 a.m. Mass at St. Rita Church in New Orleans — normally a time when the church is pin-drop quiet except for the sacristan, the organist and a few early arrivers reciting the rosary.

But as parishioners began filing into the church for Mass that day, they witnessed something they had not seen in years — their church half-filled with people.

Men, some dressed in coats and ties, some in black suits with Roman collars, were spread out in the pews, reading their morning prayers or praying silently.

“I thought it was a funeral or a wedding,” one parishioner said with a laugh, astonished by the sight of more than 100 seminarians from Notre Dame Seminary sitting or kneeling in the pews.

That Sunday was the first manifestation of a bold initiative launched by Father James Wehner, rector of Notre Dame Seminary, and New Orleans Archbishop Gregory M. Aymond to have the 136-member seminary community partner with nearby St. Rita Parish.

The idea is simple but bold.

On most Sundays, the Notre Dame Seminary community will join the parishioners of St. Rita for the parish-seminary Mass at 10:30 a.m. A group of seminarians opens the church each weekday at 6 a.m. for morning prayer and eucharistic adoration, which lasts until the 7 a.m. weekday Mass. 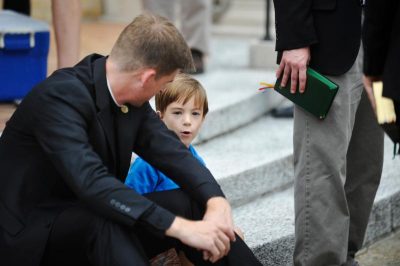 About 20 third-year seminarians also serve during the week as mentors to the students at St. Rita School, sitting in on classes, answering questions the students might have or just playing with them on the playground.

Father Wehner is the canonical pastor of St. Rita, and Father Peter Finney is the administrator, handling the day-to-day operations of the church and school and overseeing the seminarians in their new apostolic work.

While the partnership is a work in progress, one thing clear is: The church is more alive than ever.

“We were a smaller parish before, and now, with all these seminarians, it’s brought life to the parish,” said Dr. Thomas Ryan, secretary of the St. Rita parish council.

Father Wehner and Father Finney wanted to assure parishioners from the outset that the seminary was not going to be taking control of the parish. They met with parishioners in July and told them they were there to listen and to see what the parish’s needs were.

There is a two-pronged approach for the seminarians. The first is the liturgical experience, bringing the entire seminary community together at St. Rita for Sunday Mass where “seminarians will simply attend and worship side-by-side with the lay faithful.”

“The idea is that after four to six years — the length of their time at Notre Dame Seminary — they will have cultivated friendships with parishioners during the school year, consistent with their seminary formation, which we see as a benefit,” Father Wehner said. “At the end of the day, priestly ministry is dedicated to the lay faithful. These seminarians will be praying for St. Rita Parish and its neighborhood and the school children and for their intentions. There will be a parochial foundation for their spirituality.”

Two seminarians have been assigned to each grade level for the entire year.

“Those seminarians will know the children’s names and their families and their background,” Father Wehner said. “That pastoral ministry will contribute to an understanding of the whole reason of why they are in the seminary to begin with.”

Beyond that, another six to eight seminarians will help Father Wehner and Father Finney by sitting in on the parish council and finance council meetings and by helping out with adult education. Pastoral outreach has started with two seminarians, equipped with iPads, inputting and updating parishioners’ information in the parish record-keeping software.

“The involvement of the seminarians will increase,” Father Wehner said. “This is the first year, and we feel that the liturgical dimensions and the pastoral dimensions are a good way to go.”

Father Finney said the experience thus far has exceeded expectations. Recently, the parish picnic that drew about 50 people last year attracted more than 200. While children played on inflatables, seminarian Matthew Hoffpauir, studying for the Archdiocese of New Orleans, set up an easel to draw caricatures: “I can draw (almost) anything in 45 seconds,” he wrote, piquing the interest of kids.

“It’s really been great for the school kids,” Father Finney said. “They don’t really know how to make heads or tails of all these guys coming into their classes, but it’s been good to give them some practical, real and ongoing relationships. This isn’t something where we’re parachuting in and out.”

The idea for the seminarians is to encourage them to “think with the mind of a parochial vicar” and to think more “long-term,” Father Finney said.

As the initiative progresses, Father Wehner and Father Finney, who took over in July, want to find out more about what the parish’s needs are. The parish currently has 343 registered families but has added families in recent weeks.

“You want to bring people in, but what are you offering them?” Father Finney said. “We can offer them liturgy and prayer at this point, but we still need to get to know our people a little bit and develop what we have here before engaging in that.”

Karen Henderson, principal of St. Rita School, said she has been amazed by the benefits of the interaction between the seminarians and her students.

“We’re extremely excited about just having their presence,” Henderson said. “We’ve had seminarians teaching religion or assisting the teachers with religion. We’ve had them serve as mentors, for our young boys, in particular. To have so many men of faith is wonderful.”

In Stefanie Cronin’s fourth-grade class recently, seminarian Cletus Orji of New Orleans helped students by holding their handmade projects as they described the significance of them. After each child finished, Orji gave the students a high-five.

Orji said he’s gained an appreciation for the teachers’ deep well of patience, something he can make use of when he becomes a priest.

Ryan, the parish council secretary, said the seminary-parish partnership is like “learning to dance together.”

“This is unique around the country, and there’s no instruction booklet on how this should work,” Ryan said. “Something we need to watch out for is that the seminarians would come and take over, not out of spite or anything like that but because of their love of the parish and their love of ministry. The challenge is for the seminarians to empower the laity to work in ministry and live out their baptismal vocation.”

He likened it to a teaching hospital.

“Medical schools do that. They want their medical students to learn on the job, so that’s what the seminarians are doing here,” he explained. “I think it’s great they want to learn from us. I think other dioceses can learn from this.”