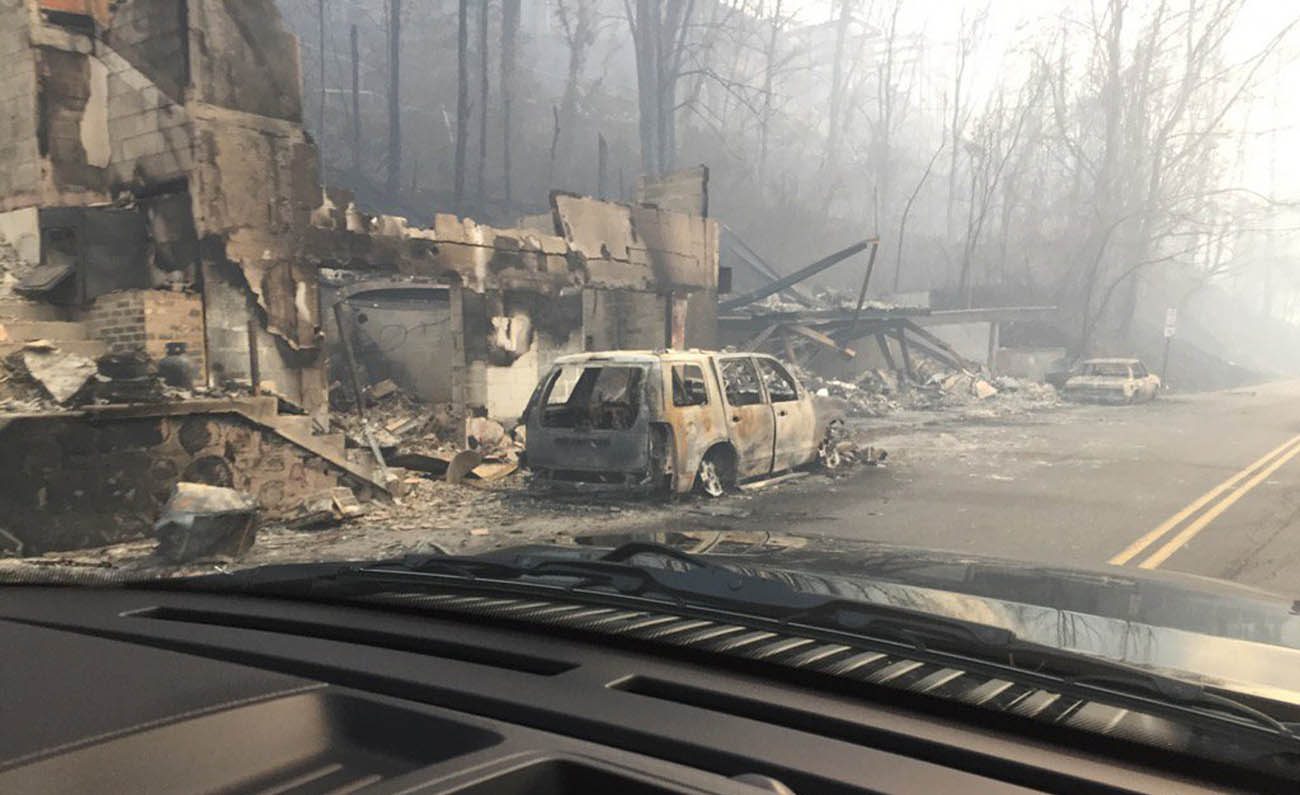 Burned buildings and cars are seen Dec. 1 in Gatlinburg, Tenn., in the aftermath of wildfires. Raging wildfires fueled by high winds claimed the lives of at least seven people, forced the evacuation of thousands, including Father Antony Punnackal of St. Mary's Church, and damaged hundreds of buildings in the popular mountain resort town. (CNS photo/courtesy Tennessee Highway Patrol, handout via Reuters)

PIGEON FORGE, Tenn. (CNS) — St. Mary’s Catholic Church was at ground zero in the wildfires that devastated parts of Gatlinburg and Pigeon Forge Nov. 28, and while flames reached to within yards of the tourist city church, it appears to have been spared.

Some parishioners weren’t as fortunate.

Its pastor, Carmelite Father Antony Punnackal, was forced to evacuate St. Mary’s as intense fires came within 300 yards of the church that sits in the heart of Gatlinburg.

The church and rectory have been closed since then, but the priest has received reports that the buildings were spared from the blaze but sustained smoke damage and possible damage from high winds that fueled the flames.

The wildfires left a swath of destruction in and around the city of Gatlinburg, causing at least 13 deaths, more than 50 injuries, and tens of millions of dollars in property damage. Dozens of residents and visitors to the tourist destination still are missing. Three people who suffered serious burns were transported to Vanderbilt University Medical Center in Nashville.

As of midday Dec. 2, the city of 5,000 residents still was closed down, with only emergency personnel allowed to enter as well as residents and property owners on a limited basis.

“I know of seven families in our parish that lost everything,” Father Punnackal told The East Tennessee Catholic, the magazine of the Diocese of Knoxville. “Five of them lived in apartments that burned to the ground. They lost their housing and all their belongings. They’re also jobless because the businesses where they worked burned.”

Many evacuees reported fleeing through horrific infernos, with intense flames licking at their vehicles as they fled down narrow mountain roads to safety. But a number of residents and tourists perished in the flames, and rescue workers still were trying to account for everyone.

Father Punnackal was told he could re-enter Gatlinburg Dec. 2 to assess the church and rectory. But he could only stay for a few hours.

He said that as he monitored the spreading fires Nov. 28, smoke was entering the church and rectory to the point it became unsafe to breathe. Shortly thereafter, he was forced to evacuate with just an overnight bag as fire threatened the property.

Father Punnackal has been staying at Good Shepherd Catholic Church in Newport while his parishioners were spread out in shelters and hotels, or with family or friends.

“I’m now far away, and I can’t get to my parishioners. I have tried to go back, but I’ve been unsuccessful,” the priest said. “I greatly appreciate everyone offering help. I’m doing what I can, but we have a long way to go.”

While a severe drought over several months prompted many of the recent eastern Tennessee woodland blazes, officials are investigating whether some of the wind-whipped fires above Gatlinburg were caused by individuals, either accidentally or intentionally.

The wildfires raced down the mountains, eviscerating everything in their path: homes, condominiums, chalets, cabins, apartments, businesses, automobiles. YouTube was populated with harrowing cellphone videos of people fleeing, blinded by thick, suffocating smoke, many of them unsure if they would make it out alive. Some of them described the situation as escaping the “gates of hell” and running through “rivers of flame.”

As a stream of vehicles exited Gatlinburg and surrounding areas, shelters were set up to accommodate those displaced, which numbered as many as 2,000 at one point. Evacuees were receiving food, clothing and other help in shelters set up by the American Red Cross, said Father Andres Cano, pastor of Holy Cross.

“Many people are showing solidarity and generosity toward the people affected by the fires,” he said, adding that “there is a longtime recovery ahead for the people and the local community.”

Father Cano was assessing the impact of the wildfires on his parish. As of Dec. 1, the parish knew of one family that lost their home to fire, but more could be affected. He also said parishioners’ employers in and around Gatlinburg were affected, and those parishioners are now out of work.

Knoxville Bishop Richard F. Stika has been working with volunteers from around the diocese to get assistance to the Gatlinburg and Pigeon Forge communities.

“What happened in the Gatlinburg area was unexpected, and each day we’re hearing about more lives lost, more property destroyed, and more heartache for many, many people. The St. Mary’s Legacy Foundation has a very precise way of evaluating grant distributions before they’re announced. In this case, the foundation felt it was best to react to this tragedy immediately,” Bishop Stika said.

“The St. Mary’s Legacy Foundation also recognizes that many communities across our entire diocese have been affected by wildfires, and more recently, tornadoes. For this reason, the $25,000 grant will be channeled into our diocesan Fund for Wildfire Victims. We want to make sure we can help everyone who needs assistance,” he added.

Sacred Heart Cathedral in Knoxville began a drive to collect bottled water, food, and clothing that has turned into a multiday effort. Those donated goods were delivered to the National Guard armory in Sevier County, just outside of Pigeon Forge, where Guard troops are assisting in the relief effort. Diocese of Knoxville schools also took part in collecting donations.

Bishop Stika said offers for assistance were coming in from around the country, including from Archbishop Paul D. Etienne of Anchorage, Alaska, who chairman of the U.S. Conference of Catholic Bishops’ Subcommittee on the Catholic Home Missions, and the Archdiocese of New Orleans. He said Archbishop Joseph E. Kurtz of Louisville, Kentucky, has helped in getting information out about the relief effort.

“It just shows that the Catholic Church is the face and hands of Jesus, and that we do together what we can’t do by ourselves. Together, with the Holy Spirit, we can overcome anything,” Bishop Stika said.

The diocese is accepting donations online for its assistance fund at http://tinyurl.com/j6gf2wd. All parishes and mission churches in the diocese were asked to hold a special collection at Masses the weekend of Dec. 3-4 for relief efforts.

The wildfires damaged or destroyed more than 700 homes and businesses, including about 300 buildings Gatlinburg and about another 400 in Pigeon Forge.

Sevier County native Dolly Parton announced her My People Foundation will give $1,000 a month in assistance to people affected by the wildfires that also destroyed a number of cabins near the Dollywood theme park. The theme park itself was not damaged in the fires, according to Dollywood officials.

He is confident the popular tourist destination will rebound.

“It is tourism that built this area and it is tourism that will bring it back,” Father Boettner said. “Dolly Parton, to her credit, has reinvested in her home community. The immediate need was emergency assistance. Now that has shifted to long-term needs, getting people back into housing, to get these folks back on their feet and rebuilding the community.”

Brewer is editor of The East Tennessee Catholic, magazine of the Diocese of Knoxville.