Philadelphians set to add their numbers to March for Life in D.C. 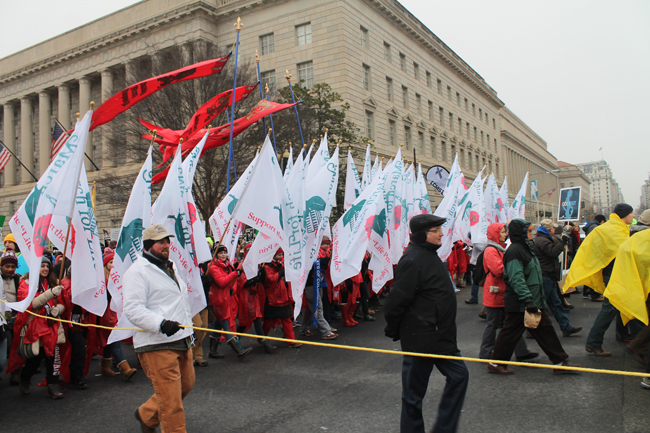 You’ve got to hand it to pro-lifers. They will flock to Washington, D.C., every year to rally and march for the sanctity of life until the U.S. Supreme Court’s 1973 Roe v. Wade decision legalizing abortion throughout the land is reversed, or hell freezes over — which almost seemed to happen during last year’s march.

This year’s March for Life is a bit later than usual, on Jan. 27, in deference to the presidential inauguration the previous week. But that doesn’t bother anyone going to the march.

“Everybody in the pro-life movement is very excited about defunding Planned Parenthood, which the president-elect has been adamant about,” said Steven Bozza, director of the archdiocesan Office for Life and Family. “Also, the leadership in Congress has made statements in favor of this, and there is a good prospect of having a pro-life secretary of Health and Human Services.”

It helps too that one of the main speakers listed for the rally that precedes the march is Kellyanne Conway, President-elect Donald Trump’s campaign manager, who has been credited by many for her contribution to his ultimate victory and who remains a key adviser in his upcoming administration.

Judging from all of this, every indication is that many thousands of pro-life supporters will participate in the march including thousands from the Philadelphia Archdiocese, although Bozza noted many groups do not register with his office for the march or for the 10 a.m. Mass celebrated for Philadelphians — which will be celebrated by Archbishop Charles Chaput at Washington’s Basilica of the National Shrine of the Immaculate Conception — until the final week.

One of the groups that has been participating annually from the very beginning is the Philadelphia Chapter of the Knights of Columbus.

This year, as in recent years, a bus for the Knights will pick up marchers at 6 a.m., the crack of dawn, at Resurrection of Our Lord Parish in Northeast Philadelphia. From there it will go on to a 7 a.m. stop at St. Francis de Sales Parish in West Philadelphia before heading to Washington, according to Nick Marcantonio, the chapter president. For reservations call 267-313-2096.

Sacred Heart Parish in Oxford, Chester County, has been sending a bus for about 15 years, according to Dorothy Leach, who coordinates the trip.

“It’s from our parish and the surrounding parishes,” she said. “We will be taking about 54 people.” She hopes with the new administration in Washington, “we will be returning to a civilization of life, not death.”

Sacred Heart Parish is still mourning for their recently deceased pastor, Father John Crowley, who died suddenly on New Year’s Eve. “He said he would come down to Washington with us,” Leach said. “He fully supported our pro-life activities. We are all saddened by his death.”

In addition to the parishes, most if not all of the Catholic high schools and many colleges within the archdiocese send at least one busload to Washington.

The archdiocesan Office for Cultural Ministries, which includes the Office for Black Catholics, the Office for Hispanic Catholics and the Office for Pastoral Care for Migrants and Refugees (PCMR), is looking to sending a busload, according to Matt Davis, director of PCMR.

“This is for students who do not attend Catholic school who would want to go,” he said.

A prelude to the annual Roe v. Wade observance in the Philadelphia Archdiocese will be a Pro-Life Summit on Saturday, Jan. 14 at the Archdiocesan Office Center, following the 12:05 p.m. Mass at the Cathedral Chapel.

At the summit there will be a viewing of the short documentary film “3801 Lancaster: An American Tragedy” concerning the infamous Philadelphia abortion clinic conducted by Kermit Gosnell.

Speaking at the event will be Bucks County Courier Times’ award-winning reporter and columnist J.D. Mullane, who covered the trial of Gosnell, who was convicted on multiple charges including the murder of three infants that were born alive.

At the Pro-Life Union of Greater Philadelphia most of its members will participate in Washington through local parish groups, according to Edel Finnegan, the executive director of the oldest pro-life organization in the area. The next day, members plan to witness for life in Philadelphia outside the Planned Parenthood clinic at 12th and Locust Streets.

“We will have several busloads of students from the Diocese of Omaha with us,” Finnegan said.