In Germantown, Vincentians worldwide plan global service to the poor 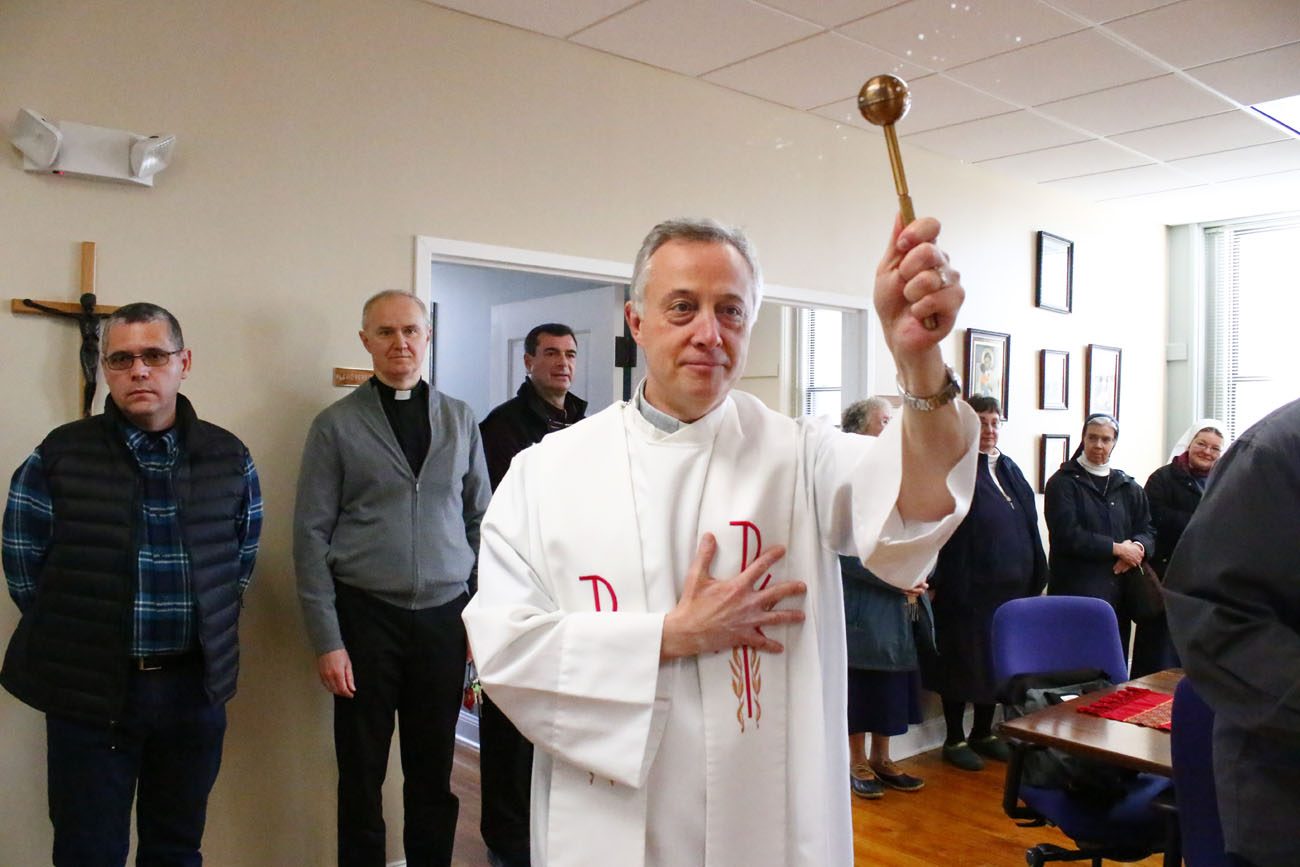 Father Tomaz Mavric, superior general of the worldwide order of Vincentian priests, blesses a meeting of 14 representative from 200 congregations of clergy, religious and lay congregations in the Vincentian family, Jan. 6-7 at St. Vincent's Seminary, Germantown, Philadelphia. (Photo by Sarah Webb) 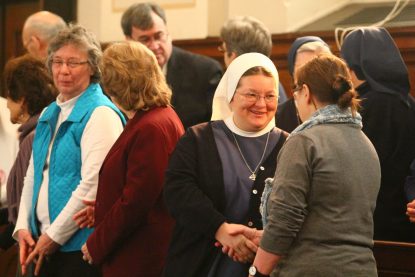 Participants in the Mass at St. Vincent’s Seminary before the Jan. 6-7 meeting of the Vincentian executive committee exchange a sign of peace. (Sarah Webb)

St. Vincent de Paul, like St. Francis of Assisi, is among those saints who are universally admired by people of goodwill of all faiths.

The year 2017 marks what is regarded as the 400th anniversary of St. Vincent’s foundation in France of the Congregation of the Mission, or the Vincentian Fathers, with a stated mission of service to the poor. He was soon joined in this work by St. Louise de Marillac and the Daughters of Charity.

Today, four centuries later, there are more than 1 million successors to St. Vincent and St. Louise including priests, religious and laity, in more than 200 independent congregations and groups who comprise the world-wide Vincentian family. The challenge is keeping everyone on message and in tune with this charism, this legacy of charity.

Although the Congregation of the Mission itself remains based in Paris, in 2015 a Vincentian Family Office was established in Germantown, Philadelphia, on the grounds of St. Vincent Seminary to promote unity in mission among the various branches.

On Jan. 6-7 the executive committee of the Vincentian family, led by Father Tomaz Mavric, superior general of the Congregation of the Mission, held its first meeting outside of Europe in Germantown to discuss a unified agenda in this anniversary year.

“We come together to celebrate. Let our hearts be filled with joy and hope,” Father Mavric said in the opening Mass of the meeting. “It is God’s work.”

He urged his congregation to be inspired by St. Vincent de Paul’s charism and to have it embrace the whole world.

Father Mavric, who was recently elected to the post of superior general which oversees all Vincentians around the world, shares something in common with Pope Francis. 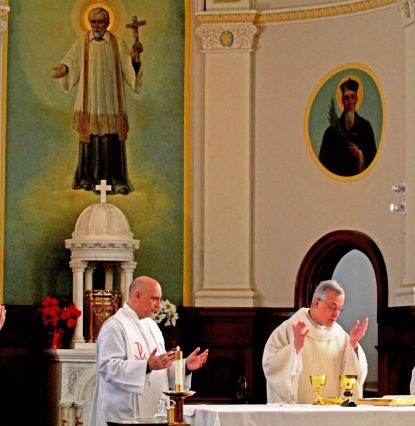 Father Tomaz Mavric, center, was the main celebrant of a Mass Jan. 6 to begin the meetings of the Vincentian executive committee at St. Vincent’s Seminary. He is the superior general of the congregation of the Mission, or Vincentians. St. Vincent de Paul, founder of the congregation and the patron saint of charity to the poor, is pictured in a fresco behind the altar. (Sarah Webb)

He also is a native of Argentina and the son of immigrants to that country. In Father Mavric’s case, his parents emigrated from Slovenia and perhaps by coincidence the plight of immigrants was one of the matters discussed by the executive committee.

During his visit Father Mavric also blessed the offices of the Vincentian Family Office, which is currently headed by Brooklyn-born Father Joseph Agostino, C.M.

The committee itself is not large. There were 14 delegates, two each from four core congregations in the Vincentian family: the Ladies of Charity; the Congregation of the Mission; the Daughters of Charity and the lay St. Vincent de Paul Society.

“One of my hopes is that we deepen our work together and collaborate across the board so that we can better meet the needs of God’s people who are living in poverty,” said Sister of Charity of Leavenworth Eileen Haynes.

Renato Limo de Oliveira, a Brazilian who was recently elected General President of the Society of St. Vincent de Paul, thought it important that leaders “meet to evaluate our work in the past year and plan for works in the coming year charism.”

Brother Lawrence Obiko, a brother of Our Lady of Mercy from Kenya, thought it “a wonderful opportunity to come together and work together as a family.”

“I hope we will come to agreement and have plans to reach out to many more people who are in one way or another members of the Vincentian family,” he said.

Father Joseph Agostino, C.M., who is coordinator for the Vincentian Family Office and was also a member of the executive committee, said the focus for the coming year, as agreed upon at the meeting, was on efforts to combat homelessness in all of its manifestations.

That would include those who are homeless for economic reasons and those who are immigrants. And also those who live on the streets for various reasons, sometimes beyond their control.

There will be further events in this anniversary year in Paris and in Catillon, France, in March to celebrate the Vincentian Quadrennial, and also a symposium in Rome that will be attended by Pope Francis.

Also, the most honored relic of St. Vincent, his heart, now enshrined in a reliquary in Paris, will begin a years-long world-wide journey for veneration, beginning in Europe, and in future years other countries where the patron saint of charity is revered, including the United States. 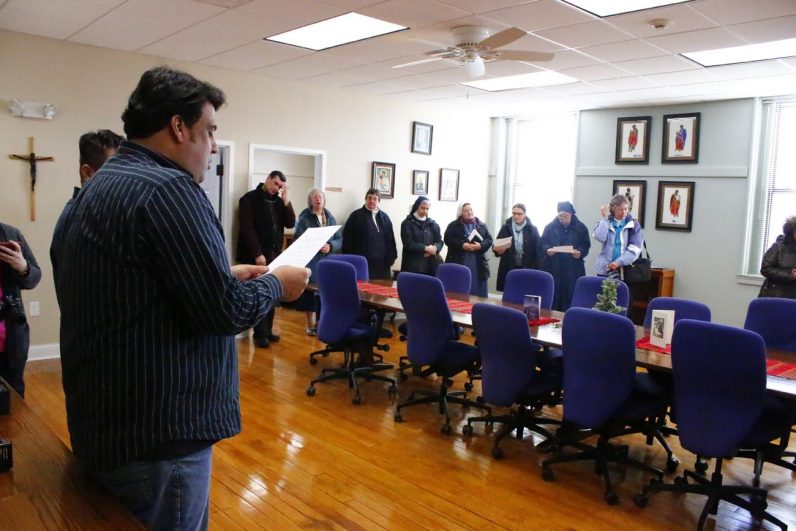 Participants of the executive committee representing 200 congregations of the 1 million-member Vincentian global family pray before one of their Jan. 6-7 planning meetings. (Sarah Webb)

PREVIOUS: After 36 years of feeding the hungers of the human family, Ayella retires

NEXT: Philadelphians set to add their numbers to March for Life in D.C.