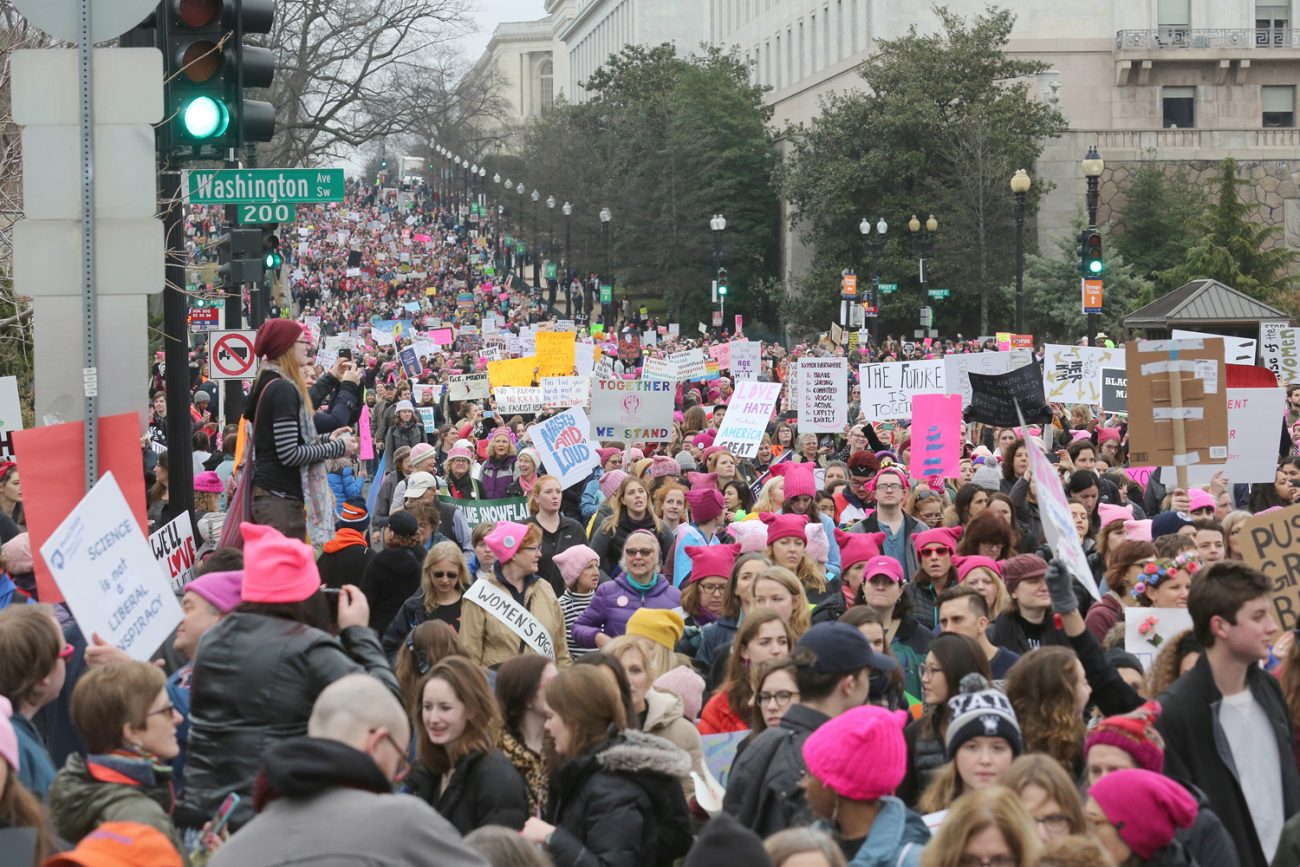 McCrum, 21, who attends Christendom College, a Catholic school in Front Royal, Virginia, joined a group organized by Students for Life of America to participate in the Women’s March on Washington.

The pro-life organization was shut out of being an official sponsoring partner for the giant march, but the group’s leaders said nothing prevented them from taking part and marching on behalf of women exploited by abortion and for the rights of “pre-born women.”

President Donald J. Trump “has made a lot of promises to the pro-life movement and I want to hold him to his promises,” McCrum told Catholic News Service. She also felt it was important to have the pro-life presence at the march because she feels the media makes it look like there are more “pro-choice people” out there than there are.

Mary Solitario, 21, a classmate of McCrum from Christendom College, told CNS it was upsetting pro-life groups were not officially recognized by march organizers. She said she wanted to join the march to show solidarity with women.

“All of us are for women’s rights and human rights,” she added, holding a sign that said: “Defending the most marginalized is defending ALL of us.” Under an outline of a pregnant woman were the words #ProtectThemBoth. Pro-Woman Pro-Life.”

Students for Life of America officials said what was billed as an inclusive march ended up having a “radical abortion agenda” once Planned Parenthood signed on as a key partner in late December and “bulldozed” over pro-life groups that wanted to be partners.

“We were ignored. Our application (to be a partner) was ignored completely. Other pro-life groups were kicked out as partners,” said Michele Hendrickson, Eastern regional director of the Virginia-based Students for Life of America. “Pro-life is pro-woman. … What was originally portrayed as inclusive is excluding pro-life.”

Texas-based New Wave Feminists was initially accepted as a march sponsor then rejected; its members still marched in Washington. Another group snubbed by march organizers was And Then There Were None, a nonprofit organization that helps abortion clinic workers leave the abortion industry.

Organizers of the huge march, which drew an estimated 500,000 participants to Washington, said the purpose of the event was “to promote women’s equality and defend other marginalized groups.” Among many issues highlighted were immigration, education, equal pay, women’s health care and “reproductive rights.” Marches were held simultaneously in New York, Boston, Atlanta, Denver, Los Angeles, Phoenix, in St. Paul, Minnesota, and Key West, Florida, and in several cities around the world.

In Washington, thousands of the marchers wore pink, magenta or rainbow-colored hats and most carried signs. Some read: “Orange is the New Quack,” apparently a reference to Trump’s hair color; “Keep Your God Out of my Bod”; “I Can Nazi How His Cabinet Picks Are Smart”; “Girls Just Want to Have Fun-Da-Mental Rights”; and “Respect Existence or Expect Resistance.”

Kristan Hawkins, president of Students for Life, told CNS she reached out to the march organizers about applying to be a march sponsor and they never responded, as Hendrickson indicated. Hawkins said the abortion industry has “taken over any discussion of women’s rights.”

Her comments prompted a few expletives from march participants as they walked passed the court toward the U.S. Capitol to join the huge march. Marchers went around the U.S. Capitol to Independence Avenue and on to the National Mall, where later in the day they heard a lineup of celebrity and other speakers, who included singer Madonna and actresses Scarlett Johansson and Ashley Judd.

As the start of the big march drew near, Hendrickson had some words of caution for the pro-lifers who were carrying their own signs and banners. “They have excluded our voices at this inclusive march. By taking a radical abortion stance, they are excluding women in the womb,” she told them. “We’re here to take a stand against that. … They’re not going to like our message today.”

She urged the pro-lifers to check their emotions and not be silent, but not to yell back at anyone who shouted at them.

At another march location members of the New Wave Feminists were gathered. That group’s Destiny Herndon-De La Rosa told CNS they were prepared for confrontation “and instead were supported by so many women.” “They kept coming up and telling us how glad they were that we were there and how, even though they didn’t necessarily agree on the abortion issue, they thought it wrong that we were removed as partners,” she said.

The Students for Life group did not receive the same kind of welcome. A video posted later in the day to the organization’s Facebook page shows marchers taunting some of the pro-lifers and ripping up their signs, which read: “Abortion Betrays Women.”

NEXT: Walk for Life West Coast draws tens of thousands ahead of Women’s March