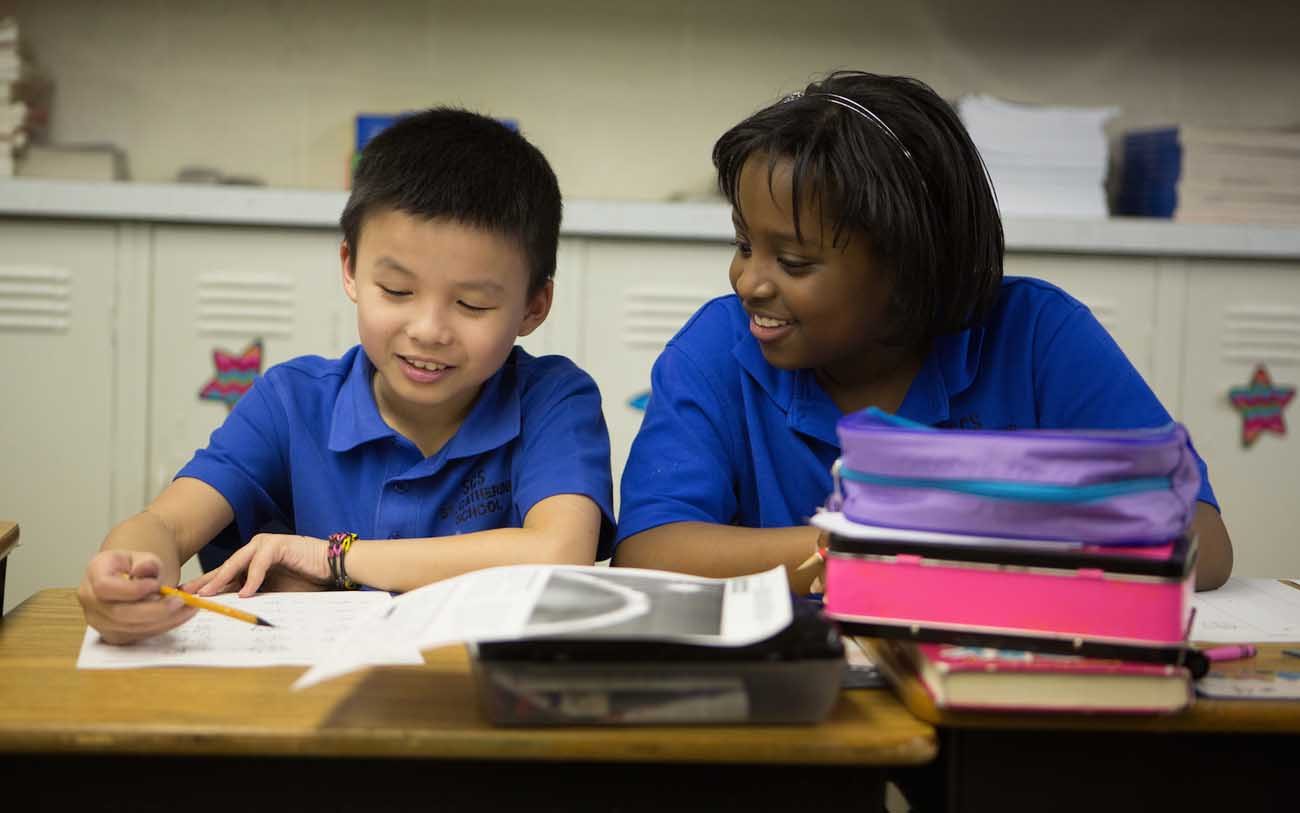 In this undated photo, students work together at St. Catherine of Siena School in the Diocese of Beaumont. The school's growing student population is diverse with 42 percent Latino, 25 percent Asian, 23 percent African-American and 10 percent Caucasian. (CNS photo/courtesy Catholic Extension)

PORT ARTHUR, Texas (CNS) — A small city located 90 miles east of Houston, Port Arthur was once a thriving city thanks to the local oil refinery, but economic changes have left the area with an unemployment rate more than twice the national average.

As jobs left the city, so did families, and with them went Catholic school students. There used to be 13 Catholic schools in the area, and now there is only one remaining: St. Catherine of Siena.

“My staff doesn’t work here for the money,” Haidee Todora, St. Catherine’s principal, told Extension magazine. “They are here because of the kids.”

Six years ago, Todora and her dedicated staff were struggling to keep the area’s last remaining school open. The Diocese of Beaumont eventually turned to Catholic Extension to help save the school. The national fundraising organization based in Chicago constructs churches and builds up the Catholic Church in some of the poorest places in the country.

St. Catherine participated in Catholic Extension’s Catholic Schools Sustainability Initiative, and enrollment has now been maintained over the past two years, despite several families moving out of the area.

The initiative gives schools the opportunity to engage in a four-year strategic planning and consulting process offered by Catholic School Management. During that time, consultants meet with the schools every six weeks, to establish and follow through on a plan that covers all aspects of the school, including school board governance, enrollment, development, communications and marketing.

Since its founding in 1979, Catholic School Management, a division of Christian Brothers Services, has worked with more than 3,000 Catholic schools across the country. Only 13 of those schools have closed.

In 2014, St. Catherine School also participated in Catholic Extension’s Latino Enrollment Initiative, and since then has increased the number of its Latino students by 64 percent.

The school, which opened in 1961, has seen a dramatic change in its diversity over the past 20 years. Today its students are 42 percent Latino, 25 percent Asian, 23 percent African-American and 10 percent Caucasian.

The Latino Enrollment Initiative, Todora said, “has really helped me understand the Latino family dynamics and what exactly people are looking for.”

Todora worked with her Latino staff and members of the community to overhaul the school’s approach to communicate and gain the Latino community’s trust.

The school “began to reach out by word-of-mouth, family and friends, phone calls, advertisements in Spanish newspapers and radio, and leaders of the community speaking at local Spanish Masses,” Todora said.

She explained that the school translated its documents and registration information into Spanish, handed out Spanish cards explaining the importance of Catholic education and published Spanish church bulletin inserts about events at the school.

The school also hired an English as a Second Language aide to help students who struggle with English in the classroom, and a bilingual assistant to answer phone calls and interpret for Spanish-speaking families.

“Working with the Latino Enrollment Institute program,” Todora said, “has definitely made a huge impact on the turnaround at St. Catherine of Siena School by giving us the tools to reach out and collaborate.”

Through these and other initiatives, Catholic Extension has helped Catholic schools across the country to remain viable by increasing enrollment, establishing best practices and helping school administrators obtain advanced degrees.

Father David Placette, the pastor of St. Catherine, said that he was one of 26 boys from his now-closed Catholic school who pursued the priesthood. He feels this high number was the result of the Catholic environment, so he is concerned about the shrinking number of Catholic schools in the diocese.

“Now with all of those other schools closed,” he asked, “where will vocations come from?”

More than 60 percent of the 8,000 square miles of the Beaumont Diocese offers no Catholic school education. Some people see a correlation between the decline in the number of Catholic schools and the decline in registered Catholics and say it shows the urgency of helping St. Catherine and the other four remaining schools in the diocese to remain strong and viable.

According to Bob Brehmer, who helps with the finances at St. Catherine school, “Catholic education brings with it the teachings of good ethics, values, and encouragement to be a good role model and leader in the community and to others.”

For Gloria Keel, a parent of two children who have attended St. Catherine, the argument is more personal. “St. Catherine’s has become my family,” she said.

Though she was not raised Catholic, she decided to look into St. Catherine because her son, who has some learning disabilities, was struggling at the public school. Not only did St. Catherine welcome Keel and her family, but her children have thrived and are considered role models to other students. “My kids are better because of St. Catherine, and I’m a better mother and person, too.”

NEXT: Events around country remember unborn during Roe anniversary