Marchers carry crosses through Chicago in memory of murder victims 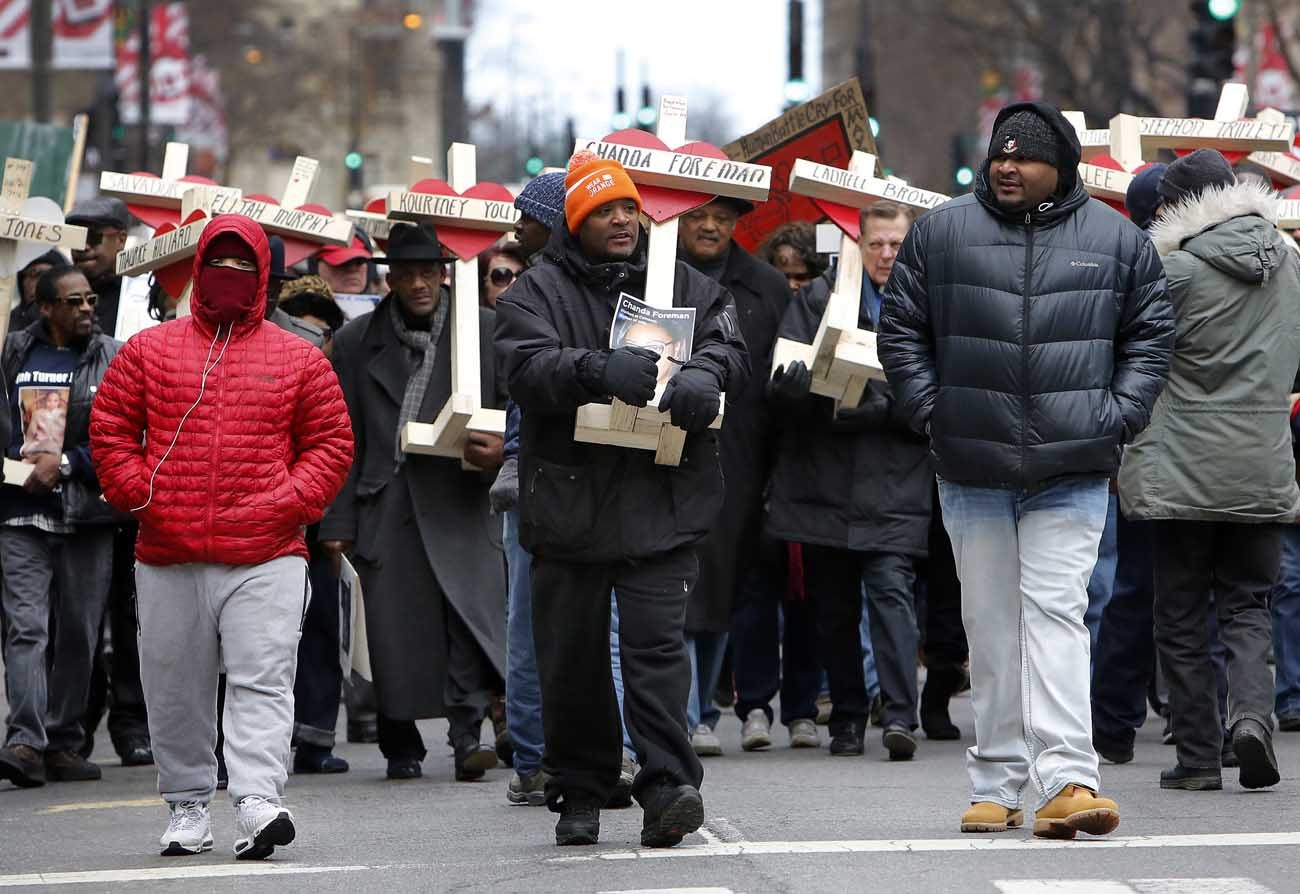 People carry crosses with names of victims of gun violence during a Dec. 31 march in downtown Chicago. Hundreds of people joined the march organized by Father Michael Pfleger, pastor of St. Sabina Parish on the city's South Side, to remember those who died by gun violence in 2016. (CNS photo/Karen Callaway, Catholic New World)

CHICAGO (CNS) — Shara Funches’ eyes scanned the rows of crosses set up on the sidewalk just north of the Chicago River on Michigan Avenue, a main thoroughfare through downtown.

Funches was looking for the cross bearing the name of her godson, Devon Almon, 23, who was gunned down on the Eisenhower Expressway Sept. 29.

“I had to be here for him. But also for all the kids who died. It just has to stop. It’s just sad. All the mothers, all the fathers, robbed,” Funches said.

She was one of hundreds of people who joined a Dec. 31 march on Michigan Avenue organized by Father Michael Pfleger, pastor of St. Sabina Parish on the city’s South Side, to remember those who died by gun violence in 2016.

The Chicago Police Department recorded 762 murders in 2016. Father Pfleger told the marchers there were nearly 800 crosses for them to carry.

The name of a victim, along with their age and date of death, was written on each 24-inch wooden cross built by Greg Zanis of Aurora, Illinois. Family members and loved ones of victims were joined by strangers who came to bear witness to the toll of the violence that has shaken the community. 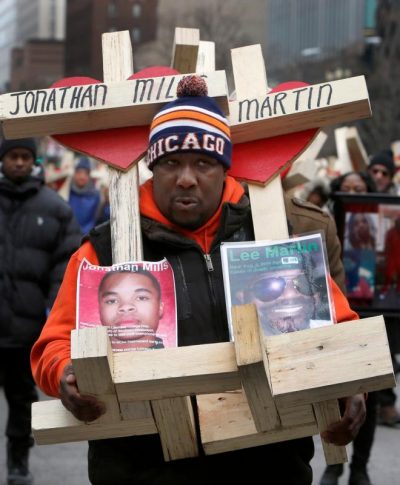 Vic Doucette, a parishioner at St. Francis Xavier Parish in suburban Wilmette, came with his wife to show solidarity with families who have lost someone to violence.

“It draws attention to the issue,” Doucette said. “It gives people an opportunity to express their feelings and be witness to those who are suffering. We need to do something.”

Opening the march, Father Pfleger told the group that the violence will not end until everyone gets involved.

“We’re protesting violence,” he said. “Who are we calling to get involved? Everyone … every elected official; every government agency; every business and corporation; every mosque and synagogue and church; every law enforcement official; every parent, neighbor and resident; and every citizen from children to elders. Everyone.

“Peace does not just happen. Peace is created,” the outspoken priest continued. “The Bible says, ‘Blessed are peacemakers,’ not the peacekeepers, because peacekeeping is business as usual. Peacemakers create peace and make the atmosphere where justice and peace stand together.”

Cross-maker Zanis said he was heartbroken by the continuing violence. He has made crosses to remember victims of violence for years, including those killed in the mass shootings in Littleton, Colorado, and Newtown, Connecticut.

He had planned to display the crosses in Chicago over the New Year holiday, and when Father Pfleger approached him with the idea of the march, he agreed to bring the crosses.

The march proceeded in near silence, led by Father Pfleger and others, including the Rev. Jesse Jackson. They took turns reading the list of victims’ names.

Larren Davis was astonished by the rows of crosses, some seven deep, waiting to be claimed and carried. Davis’ son, Sentwali Davis, 37, was robbed of his cellphone, shot in the head and left in an alley Oct. 22. 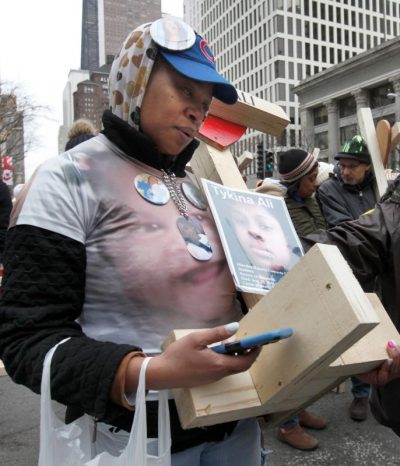 Tykina Watts carries a photo of her daughter and a cross with her daughter’s name, Tykina Ali, during a Dec. 31 march against gun violence in downtown Chicago. (CNS photo/Karen Callaway, Catholic New World)

“They have no leads in the case,” Davis said. “The detectives don’t even return our calls. The supervisor says they’re overwhelmed.”

Davis said he passed people ice skating in Millennium Park on his way to the march.

“They should be out here now,” he said. “Everything should be stopped. We’re in a war zone. Homeland Security should be right here.”

Dolores Castaneda was among the Catholics who joined the march. She helped carry a banner from the Padres Angeles group at St. Agnes of Bohemia Parish in Chicago. The banner had photos of parishioners recently killed by violence.

“We support the family when somebody dies through violence. St. Agnes will support them in their time of need,” said Castaneda, adding that her own daughter had been shot, but survived. “Everybody in the community is touched by violence.”

Father Don Nevins, St. Agnes of Bohemia pastor, said parishioners felt it was important to participate after hosting their own anti-violence march in November.

“It’s not just a situation in the African-American community,” Father Nevins said. “It’s very much in the Hispanic community as well.”

After the march, Father Pfleger said he was heartened by the response.

“Look at this group,” he said. “It’s black and white and brown. And it’s going to take all of us to solve this.”

NEXT: At installation Mass, Bishop Parkes stresses work ahead