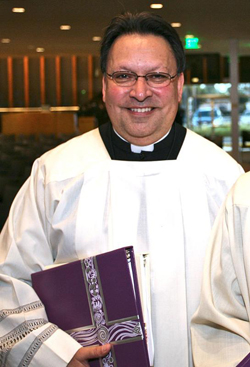 Father Alfred Baca is pictured in a 2014 photo. (CNS photo/courtesy Diocese of Orange)

WASHINGTON (CNS) — Father Alfred Baca, a priest of the Diocese of Orange, California, has been named the new executive director of the U.S. bishops’ Secretariat on Ecumenical and Interreligious Affairs.

He succeeds Father John Crossin, an Oblate of St. Francis de Sales, who had held the post since late 2011 and is currently on a sabbatical to continue his research and writing.

Ordained to the priesthood in 1989, Father Baca served in various parish assignments before attending the Pontifical University of St. Thomas Aquinas in Rome, where, in 2006, he received a licentiate in sacred theology with a specialization in ecumenical studies.

“Father Baca brings to the (bishops’) conference a wealth of knowledge and experience in the realm of ecumenical and interreligious dialogue, both at the institutional and at personal levels,” said a Jan. 18 statement from Msgr. Brian Bransfield, general secretary of the U.S. Conference of Catholic Bishops, who made the appointment.

“In today’s world, efforts to heal the Christian family are more important than ever. Cooperation with the other religions of the world can only benefit the human family,” Father Baca said in a Jan. 18 statement. I’m looking forward to collaborating with the bishops and the USCCB staff in furthering the church’s mission, especially in the work toward Christian unity and reconciliation.”

Father Baca is a member of the Catholic Association of Diocesan Ecumenical and Interreligious Officers. Until last year, he also served as a U.S. representative for the organization.

PREVIOUS: Theologian: Christian unity possible but not a ‘call to ignore realities’

NEXT: Speakers: Aim for truth with love to help those with same-sex attraction