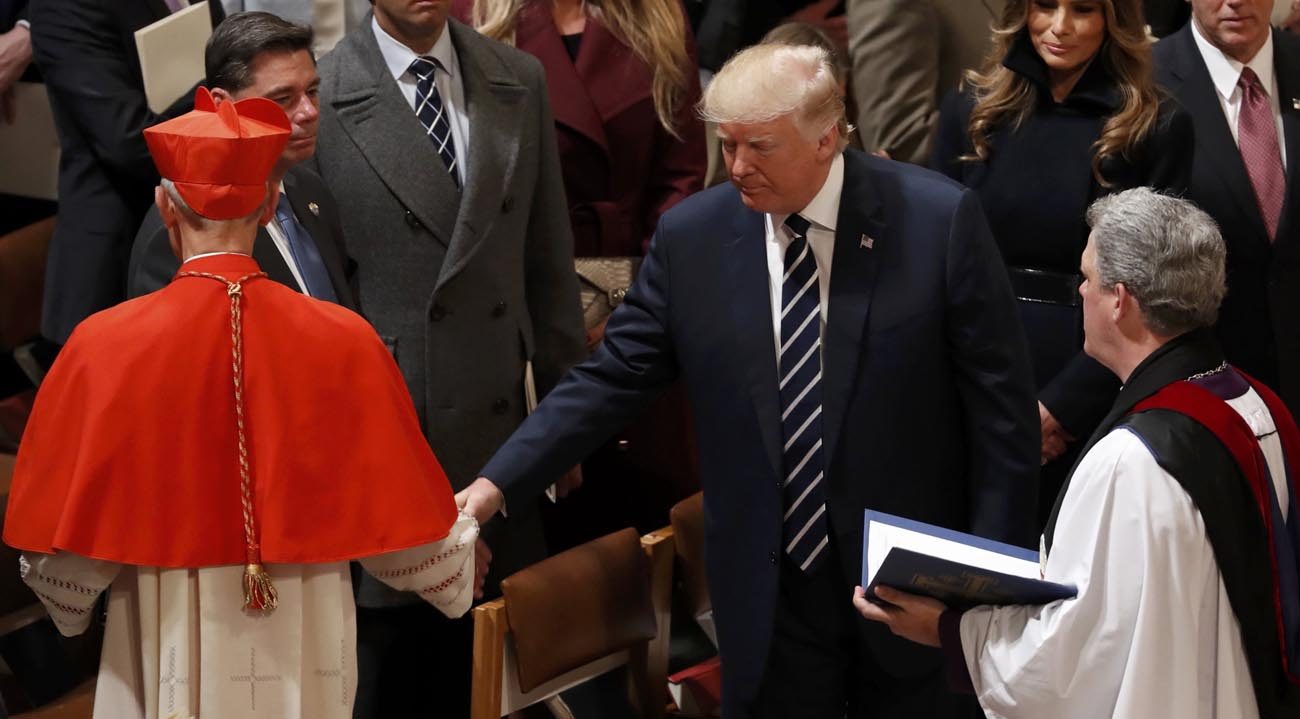 WASHINGTON (CNS) — One day after President Donald J. Trump took the oath of office as the 45th president of the United States, leaders of different faith communities — including Washington Cardinal Donald W. Wuerl — gathered to offer prayers for the new administration and for the country.

The Jan. 21 interfaith prayer service at the Washington National Cathedral was attended by President Trump and first lady Melania Trump, Vice President Mike Pence and his wife, Karen, members of their families, other administration officials and invited guests.

“Bless our land with honest industry, sound learning, and an honorable way of life. Save us from violence, discord, and confusion; from pride and arrogance, and from every evil way,” Cardinal Wuerl said during his prayer. “Give those whom we have entrusted with the authority of government the spirit of wisdom, that there might be justice and peace in our land.”

In addition to Cardinal Wuerl, participants in the prayer service included leaders of Episcopalian and other Protestant denominations, Jewish, Muslim, Sikh, Mormon, Buddhist, Greek Orthodox, Baha’i and other faiths.

The service did not include a homily or sermon, but instead was a ceremony of prayers, Old and New Testament scriptural readings, a reading from the Quran, and patriotic and religious music. The service — which started about a half hour late — began with a Native American invocation chanted by a representative of the Navajo Nation.

Other calls to prayer were offered during the service in English, Hebrew and Arabic.

The Episcopal Bishop Mariann Budde of Washington prayed that the nation’s new leaders would “draw strength and courage” from God and that all people “seek divine assistance to care for one another (and) to live the highest ideals to which God calls us.”

Other participants included Archbishop Demetrios, primate of the Greek Orthodox Church in America; Alveda King, niece of the Rev. Martin Luther King Jr., who is a pastoral associate at Priests for Life and director of its Civil Rights for the Unborn division; the Rev. Randolph Marshall Hollerith, dean of the Washington National Cathedral; and Cissie Graham Lynch, granddaughter of evangelist Billy Graham and daughter of evangelist Franklin Graham.

“Look with compassion on the whole human family; take away the arrogance and hatred which infect our hearts; break down the walls that separate us; unite us in bonds of love; and work through our struggle and confusion to accomplish your purposes on earth,” Rev. Hollerith prayed.

The service also included prayers for educators “that they may have the strength and endurance to instill a love of learning … and the pursuit of wisdom in those they teach;” and prayers for first responders and health care workers that they “may serve (God) and their neighbor” and have “courage when afraid and strength when weary.”

During his prayer near the end of the hourlong ceremony, Cardinal Wuerl prayed that God would “make us always remember your generosity and constantly do your will. Make us who come from many nations with many different languages a united people. … When times are prosperous, let our hearts be thankful; and, in troubled times, do not let our trust in you fail.”

The prayer service was the last official inaugural event of the weekend, which also saw the swearing-in ceremony, a congressional luncheon, a parade and several balls. It is a tradition that dates back to George Washington. The service, in its present interfaith form, dates back to the first inauguration of President Franklin D. Roosevelt.

Prior to the prayer service, a choral prelude was held, featuring several singing groups, including a choir from Holy Comforter-St. Cyprian Church in Washington.

Music for the event was provided by the Washington National Cathedral Choir, the Brass Ensemble from the “President’s Own” U.S. Marine Band, the Liberty University Praise Choir, the U.S. Navy Sea Chanters and others. The music was a mix of religious and patriotic songs including the national anthem, “My Country ‘Tis of Thee,” “America the Beautiful,” “We’ve Come This Far by Faith” and “How Great Thou Art.”

At the end of the service, Bishop Budde dismissed the congregation, urging them to “be of courage and render to no one evil for evil. Love peaceably with all, but make no peace with oppression.”

Later that same day, Cardinal Wuerl celebrated the vigil Mass at the Cathedral of St. Matthew the Apostle. The Mass included special prayers for the new president and his administration, which were adapted from the prayer composed by Archbishop John Carroll in 1791.