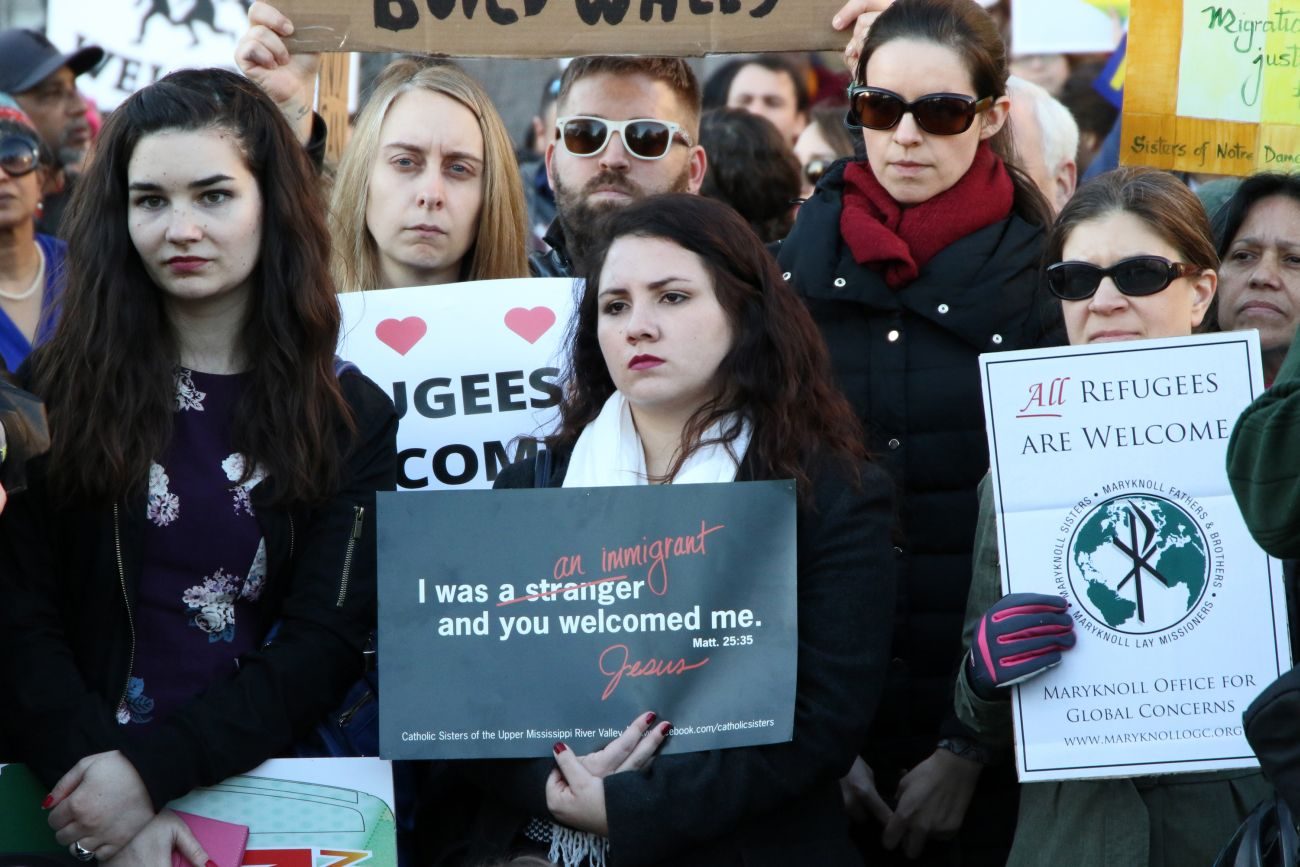 People protest against President Donald Trump's immigration policies during a demonstration near the White House in Washington Jan. 25. (CNS photo/Gregory A. Shemitz)

WASHINGTON (CNS) — Church leaders in the United States and Mexico acknowledged the need for governments to keep their country secure but said two recent U.S. presidential actions could endanger the lives of immigrants and split border communities.

President Donald Trump called for construction of an “impassable physical barrier” along the United States’ southern border because “continued illegal immigration presents a clear and present danger to the interests of the United States.”

He called for increased enforcement and the withdrawal of federal funds from cities and states that do not comply.

The presidential actions, signed Jan. 25 at the Department of Homeland Security, brought an immediate stream of reactions from church officials, as a group and as individuals. Many cited Pope Francis’ call to build bridges and break down walls.

Representatives of the bishops in the United States and Mexico, who have been working on this issue for 20 years, said the answer was comprehensive immigration reform, not a wall.

Building a wall would “make migrants, especially vulnerable women and children, more susceptible to traffickers and smugglers. Additionally, the construction of such a wall destabilizes the many vibrant and beautifully interconnected communities that live peacefully along the border,” said Bishop Vasquez.

“Instead of building walls, at this time, my brother bishops and I will continue to follow the example of Pope Francis. We will ‘look to build bridges between people, bridges that allow us to break down the walls of exclusion and exploitation.'”

Bishops from Mexico quoted Bishop Vasquez’s remarks and spoke of the border communities served by two different dioceses. As examples, they cited Matamoros, Mexico, and Brownsville, Texas, as well as Laredo, Texas, and Nuevo Laredo, Mexico — communities separated only by the Rio Grande.

“We express our pain and rejection to the construction of this wall, and we respectfully invite you to reflect more deeply on the ways in which security, development, activation of employment and other necessary and fair measures can be pursued without causing further damage than those already suffered by the poorest and most vulnerable persons,” said the Mexican bishops.

They said they would continue to help Central Americans traveling through their country en route to the United States and urged the Mexican government, when dealing with the U.S., to “safeguard dignity and respect for people, regardless of their nationality or creed.”

“We respect the right of the United States government to care for its borders and its citizens, but we do not believe that a rigorous and intensive application of the law is the way to achieve those objectives; on the contrary, these actions generate alarm and fear among immigrants, disintegrating many families without further consideration,” they said.

Nearly every church leader who issued a statement explicitly recognized the president’s right and duty to protect U.S. security.

In a separate statement Jan. 26, Bishop Vasquez said he shared the concern that all feel when someone “is victimized by crime, especially when the perpetrator of that crime is someone who is in the United States without authorization.”

However, he said, Trump’s executive action authorizing increased enforcement “would force all jurisdictions to accept a one-size-fits-all regime that might not be best for their particular jurisdictions.”

He said the bishops, who work with law enforcement and immigrant communities, know how important it is to have cooperation between the two, and he said he feared Trump’s action could hurt that relationship.

“I have enormous respect for and value our federal law enforcement agents who risk their lives every day to enforce our immigration laws. I also recognize that there may well be situations where local government feel they need to foster a relationship with their communities by working with the victims of or witnesses to crime without instilling a fear that by coming forward, they or their family members will be handed over to immigration authorities,” he said.

The executive memorandums did not address the issue of DACA, the Deferred Action for Childhood Arrivals program, nor did they discuss emigration from the Middle East, which government officials indicated would be addressed at a later time.

In 2006, President George W. Bush signed the Secure Fence Act, which authorized several hundred miles of fencing along the 2,000-mile U.S. frontier with Mexico. The Associated Press reported that legislation led to the construction of about 700 miles of various kinds of fencing designed to block both vehicles and pedestrians, primarily in Texas, New Mexico, Arizona and California. It said the final sections were completed after President Barack Obama took office in 2009.

AP reported that a 1970 treaty with Mexico requires that structures along the border cannot disrupt the flow of rivers that define the U.S.-Mexican border along Texas and 24 miles in Arizona.

The bishops of Arizona, which includes 389 miles of border with Mexico, reiterated their call for comprehensive immigration reform. They said their “hearts and prayers go out to refugee families who have faced terrible violence and lost their own homes and now need a new place to live.”

“Focusing on building a new border wall has the potential to take us away from these important considerations that impact vulnerable families and will ultimately be useless. Pope Francis has called for bridges, not walls, between people,” the four bishops said in a statement.

In a blog, Cardinal Daniel N. DiNardo of Galveston-Houston reiterated the migration commission concerns about the border wall and an increase in deportations and detentions. He reiterated the archdiocese’s commitment to a policy that “protects human rights, dignity and the homeland at the same time.”

Cardinal Joseph W. Tobin of Newark, New Jersey, said Trump’s executive actions were “the opposite of what it means to be an American.”

“Closing borders and building walls are not rational acts,” said the cardinal, whose grandparents were immigrants. “Mass detentions and wholesale deportation benefit no one; such inhuman policies destroy families and communities.

“In fact, threatening the so-called ‘sanctuary cities’ with the withdrawal of federal funding for vital services such as health care, education and transportation will not reduce immigration. It only will harm all good people in those communities,” he said.

Sean Callahan, president and CEO of Catholic Relief Services, which works in Central America, said the United States needs “to address the reasons people are leaving their homes — violence and lack of opportunity. And we need to protect their right to apply for asylum.”

“While working in the most violent neighborhoods of Honduras, for example, we have seen how children are orphaned by violence,” he said. “People have a right not to migrate and remain in their home countries — that is our goal — but when their very lives are threatened, they don’t have that option. And as a nation, we have always afforded people their day in court to apply for protection.”

NEXT: Cardinal Dolan: If sanctuary of the womb is violated, no one is safe