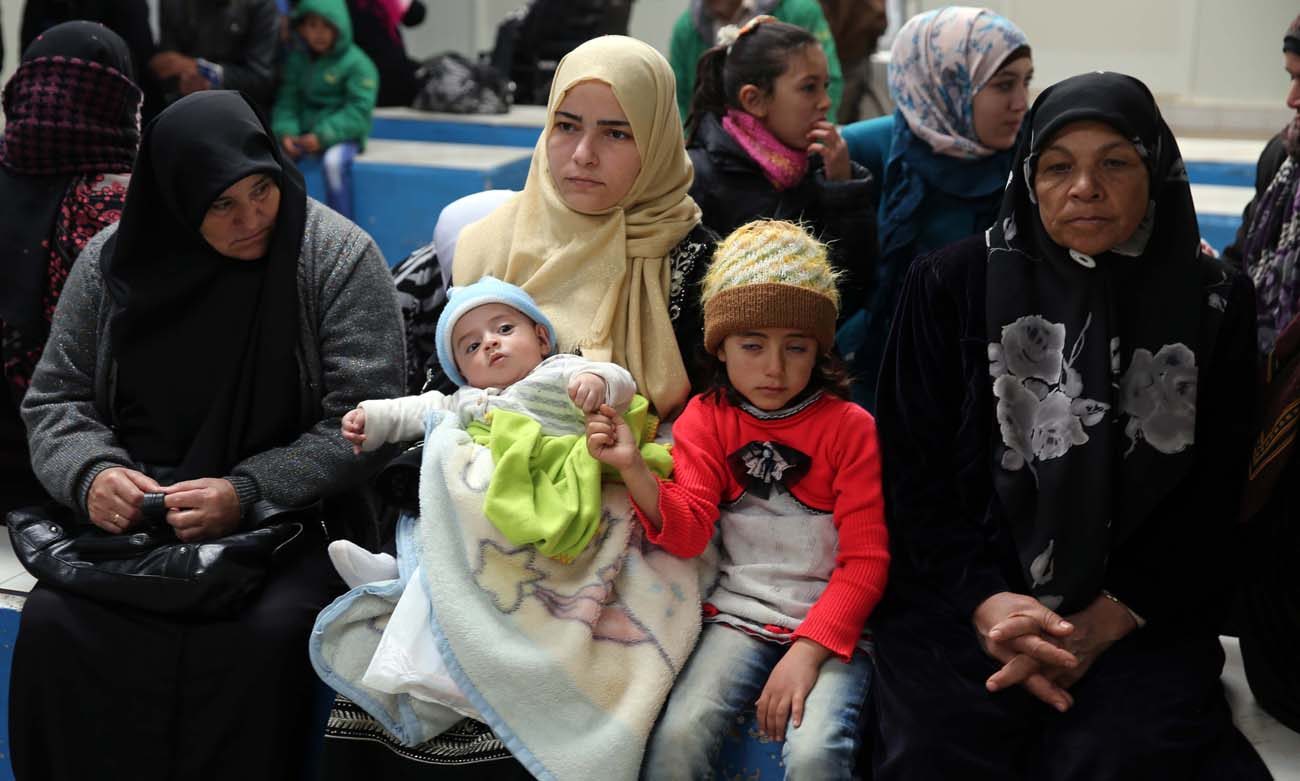 Syrian refugees wait at a clinic in 2016 at a camp near the Jordanian city of Mafraq. Promised resettlement in the United States after escaping death and destruction in their homeland, many Syrian refugees are frustrated and angry over President Donald Trump's executive action banning their entry to the U.S. until further notice. (CNS photo/Jamal Nasrallah, EPA)

AMMAN, Jordan (CNS) — Promised resettlement in the United States after escaping death and destruction in their homeland, many Syrian refugees are frustrated and angry over President Donald Trump’s executive action banning their entry to the U.S. until further notice.

“We’re frustrated. We were told that we were accepted for resettlement in the U.S., and now everything is at a standstill,” a Syrian refugee woman told Catholic News Service, wiping away tears as she surveyed her crumbling home in the Jordanian capital.

“Neither the U.S. Embassy nor the International Organization for Migration have responded to our repeated telephone calls about our status or what to expect in the future,” said the mother of four young children, whose family fled to Jordan in 2013 after their home was bombed. Rahma provided only her first name for fear of reprisal.

“If there is no longer any chance of being resettled in the U.S., then we would like to know whether we can apply somewhere else which will welcome us,” she said.

The burden of not being able to work in Jordan over these past years has left Rahma’s family desperate, unable to provide even the basic necessities of food and heating for the winter.

Refugee Abdel Hakim, a pharmacist from the southern Syrian town of Daraa, cannot contain his anger at seeing his dreams of starting a new life in the United States dashed. He and his family were far along in the approval process and expected to travel shortly from Jordan to the U.S. He called the measure “discriminatory and racist.”

“In the beginning, we didn’t want to leave Syria. But as it’s been plunged deeper in war, we now find even the door to America has been slammed shut in our faces,” he told CNS.

Trump’s Jan. 27 presidential action ended indefinitely the entry of Syrian refugees to the U.S., pending a security review meant to ensure terrorists cannot slip through the vetting process. As well, it suspended the entire U.S. refugee resettlement program for 120 days.

The action also slapped a 90-day ban on all entry to the U.S. from seven Muslim-majority countries with terrorism concerns, including Syria. While Jordan is not on that list, the Middle East kingdom hosts more than 1.5 million refugees who have fled conflicts in neighboring Syria and Iraq, including flight from the so-called Islamic State militants.

“These dramatic and discriminatory policies will only harm, not help, U.S. interests and our national security,” Jesuit Refugee Service-USA said in a statement criticizing the decision.

For the past 15 years, as waves of refugees fleeing the 2003 Gulf war, the Syrian civil war and those persecuted by Islamic State militants have flooded Jordan in search of a safe haven, Catholic and other churches have provided food, clothing, heating and other items, regardless of the refugees’ religious background. International faith-based aid groups, such as Catholic Relief Service and Caritas, have been at the forefront of efforts helping refugees, mainly from Syria and Iraq, but also those who fled the Arab Spring uprisings of 2011.

Resource-poor Jordan has struggled to provide water and electricity, education and health services to hundreds of thousands of refugees as the grinding conflicts in their homelands show little sign of ending. Many Syrian refugees accepted for U.S. resettlement have arrived from Jordan.

More than 27,000 Syrian refugees from 11 Middle Eastern host countries were under consideration for resettlement to the U.S. and in various stages of the approval process at the time of Trump’s action, according to the International Organization for Migration, a U.N.-related agency that interviews and prepares refugees for resettlement.

Quickly, the measure sparked mass protests at U.S. airports and other venues, where people demanded its repeal. Angry demonstrators criticized the ban as completely contrary to America’s ideals and its storied history of accepting immigrants fleeing persecution in search of a better life.

King Abdullah II of Jordan visited Washington Jan. 30, becoming the first Arab leader to meet members of the Trump administration, including Vice President Mike Pence and the secretaries of defense and homeland security.

The king raised the controversial bans in his talks, according to an official statement, which said he “emphasized that Muslims are the No. 1 victims” of Islamic terrorists, whom he called religious “outlaws” who “do not represent any faith or nationality.”

King Abdullah will address the National Prayer Breakfast Feb. 2 and is expected to meet Trump.

The monarch is considered Washington’s closest Arab ally battling the Islamic State as part of the U.S.-led coalition in Iraq and Syria. Jordan hosts considerable U.S. military hardware and personnel, serving as a critical base for U.S. air operations against the Islamic State in Syria. It has also experienced deadly Islamic State attacks on its territory.

Jordan has also called the new administration’s proposal to move the U.S. Embassy in Israel to Jerusalem “a red line” that could evoke “catastrophic” consequences, including widespread violent unrest at home and in the region. Jordan is the custodian of Muslim and Christian holy sites in Jerusalem under a 1994 peace treaty with Israel, only one of two treaties the Jewish state has with Arab countries.

NEXT: Canadian bishop worries euthanasia could be seen as moral obligation