Success, well-being at any cost will deceive, disappoint, pope says 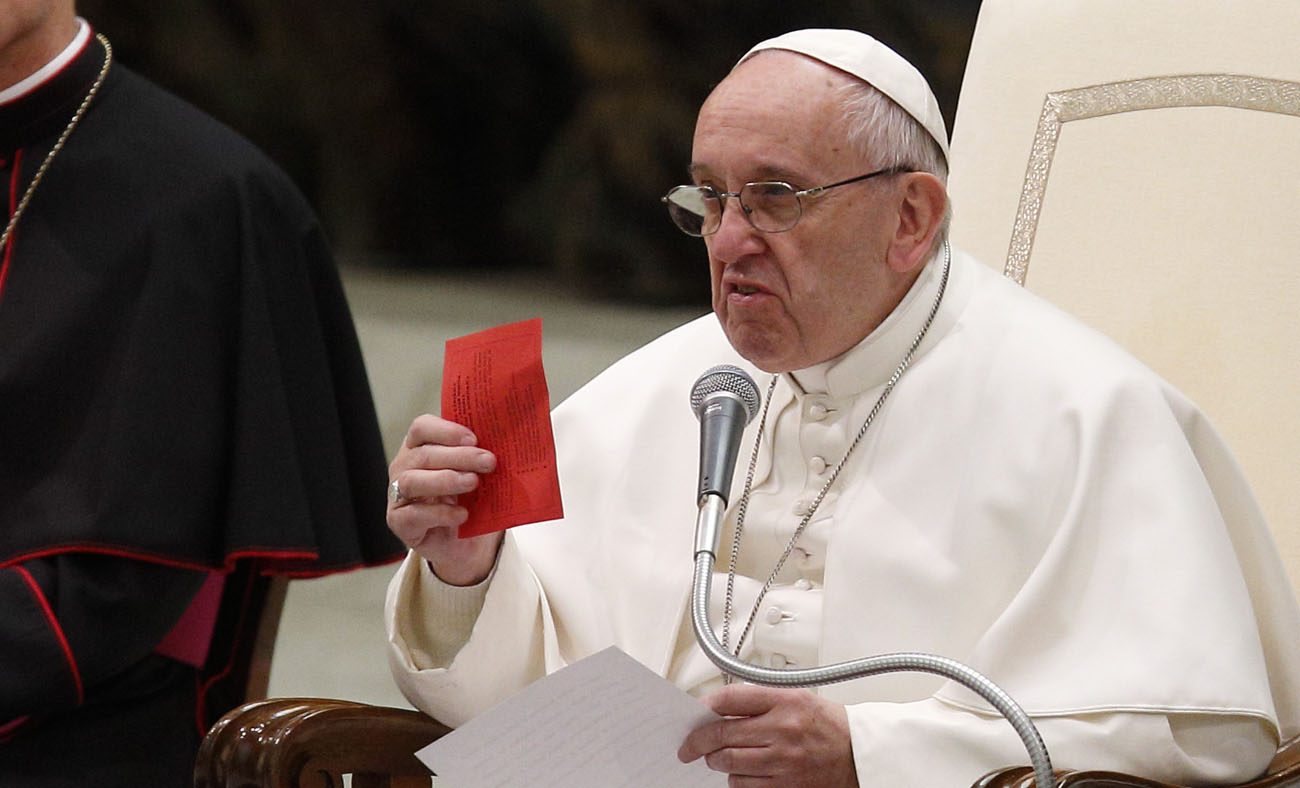 Pope Francis holds an audience ticket during his general audience in Paul VI hall at the Vatican Jan. 11. The pope held the ticket as he warned that some people were trying to sell the free audience ticket. (CNS photo/Paul Haring)

VATICAN CITY (CNS) — Watch out for the tempting promises and easy rewards of false gods and idols because they always lead to confusion, disappointment and even death, Pope Francis said.

“We are tempted to seek even fleeting comfort, which seems to fill the emptiness of solitude and ease the exertion of believing” in God, especially in times of trouble, he said Jan. 11 during his weekly general audience.

But the hope and security that come from God “never ever disappoint,” he said. “Idols always let you down” since they are figments of the imagination and not “alive and real” like God.

The pope continued his series of talks on Christian hope by reflecting on Psalm 115, which warns of the false hopes and securities offered by man-made idols.

While the psalmist speaks of statues made of “silver and gold,” the pope said idols also include anything people hold up as the ultimate answer to their happiness and security like money, power, success and false ideologies — all of which carry “illusions of eternity and omnipotence.”

Even things like physical beauty and health become idols when a person is willing “to sacrifice everything” in order to obtain or maintain them, he said.

“They are all things that confuse the heart and mind and instead of promoting life, they lead to death,” he said. As an example of this, he said he once heard a woman speak very nonchalantly about procuring an abortion because the pregnancy would have ruined her figure.

“These are idols and they take you down the wrong path. They do not give you happiness,” he said.

The pope marveled at the huge number of fortunetellers he used to see sitting in a city park in Buenos Aires, Argentina, and the lines of people waiting their turn to consult them.

The shtick “is always the same, ‘There is a woman in your life,’ ‘Something dark is coming,'” he said ominously. But the people would pay to hear such things, and this was supposed to make them feel better even though they were putting their trust in a bunch of nonsense, he said.

“We buy false hope,” which shows how much people cling to it, he said. True hope, the kind Jesus brought freely by “giving his life for us, that kind we don’t trust in so much sometimes.”

Faith in God takes strength and perseverance, and when bad things happen in life, he said, sometimes that faith wavers and people feel they need a different kind of certainty, something easier or more “tangible and concrete.”

“Sometimes we seek a god that can bend to our wishes and magically intervene to change reality and make it be the way we want,” he said. This is what people love and seek — a god “that looks like us, understandable, predictable,” even though “it can do nothing — impotent and deceitful.”

The psalmist says that those who worship or trust in things that cannot speak, see, feel, move or hear, will become like them with nothing to say, “incapable of helping, changing things, smiling, giving oneself and incapable of loving.”

“Even we, people of the church, run this risk” of becoming worldly, he said. “We need to be in the world, but defend ourselves from the illusions” and idols of the world.

But those who persevere and courageously trust and hope in the Lord, they become more and more like him, sharing in his life and blessings, “transforming us into his children.”

“In this God, we have hope. This is the God that is not an idol, that never disappoints,” and always remembers his people even during their most difficult trials, he said.

At the end of the audience in the Vatican’s Paul VI audience hall, the pope told people to make sure they never pay for a ticket to see the pope because entry to papal events is always free since “this is a home for everyone.”

“I found out that there are pretty crafty (people) who charge for tickets,” which should have written on them in different languages that they are completely free of charge.

“Whoever makes you pay to get you into an audience commits a crime,” he said. Tickets for papal Masses also always are free. No tickets are needed for the noon Angelus prayer.