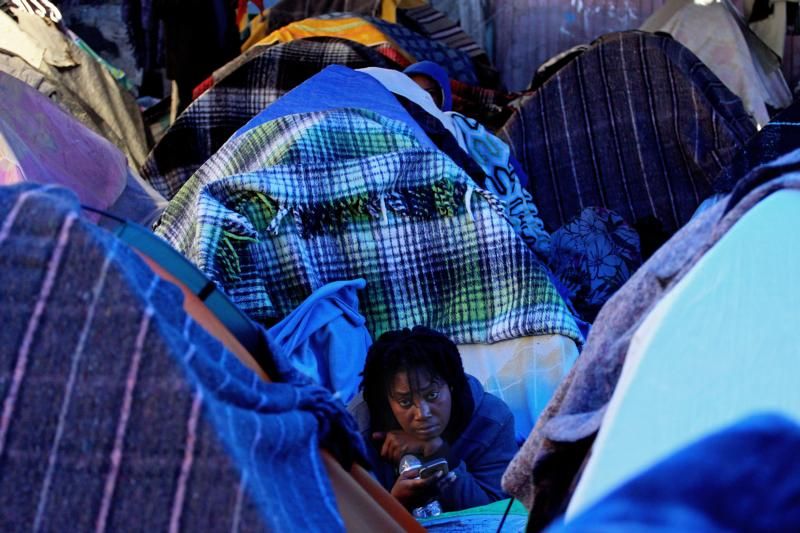 A Haitian migrant looks out from a tent Jan. 16 at a shelter in Tijuana, Mexico. In 2010, after a devastating earthquake struck Haiti, the governments of Mexico and Brazil took in a number of Haitians seeking to temporarily work in those Latin American nations. (CNS photo/Alejandro Zepeda, EPA)

MIAMI (CNS) — In 2010, after a devastating earthquake struck Haiti, the governments of Mexico and Brazil took in a number of Haitians seeking to temporarily work in those Latin American nations, particularly to help Brazil prepare for its Summer Olympics and World Cup soccer events.

But recently, as those nations entered new economic recessions, many of those same workers and their families have made their way north and appealed for asylum in the United States.

The result has been many Haitians placed in temporary detention centers throughout the country, often in places lacking any Creole-speaking detention and legal staff.

“About 4,000 were in detention somewhere in the United States in December alone, in places like Texas, Tennessee and Washington state, where they often can’t access Creole-speaking assistance,” said George Francis, a lawyer on staff at the Archdiocese of Miami’s Catholic Legal Services.

In December, George and three other staff members from his office made two trips out west to meet with Haitian detainees in the Denver and Phoenix areas. They were asked to bring their Creole-speaking and immigration legal skills by the Florence Immigrant and Refugee Rights Project in Arizona, and the Rocky Mountain Immigrant Advocacy Network in the Denver suburb of Westminster.

“We saw over 800 detainees at the facilities during a two-week period, where we conducted ‘Know Your Rights’ presentations and talked to them about communicating with detention staff,” George said, adding that the vast majority of those Haitian detainees had come from Brazil.

“The job situation is bleak in Brazil and in Mexico,” he told the Florida Catholic, Miami’s archdiocesan newspaper. The consultations out west put a strain on the Catholic Legal Services staffers’ South Florida work “but we have to make the sacrifice where we can, and if we had the funding we would do more,” he added.

“In a perfect world, we would try to make this a monthly trip where we go out to facilities and at least provide the ‘Know Your Rights’ presentations,” George said. “Beyond that, we are trying to help them secure their release rather than have them languish in detention for months.”

Separately, Father Reginald Jean-Mary, administrator of Notre Dame d’Haiti Mission in Miami, made a short pastoral visit in early February to a large group of mostly young-adult Haitian detainees being housed in a Denver-area immigration detention facility with no Creole-speaking staff.

Traveling at the behest of the Miami and Denver archdioceses, Father Jean-Mary said he celebrated a series of six Masses and spent private time with a total of 280 detainees, who were gathered in groups of about 50 to meet with him.

Most, he said, had lived and worked in Brazil prior to the World Cup and had made an arduous journey through 11 countries in an effort to resettle in the United States. Others had lived in Chile.

Officials from the Denver Archdiocese, including Deacon Steve Varello, who coordinates prison ministry there, said the Haitians had been detained for about four months and were in need of a pastoral visit. Father Jean-Mary and the deacon spent about eight hours with them Feb. 2, the feast of the Presentation, also known as Candlemas. It is celebrated as a day of renewal, hope and purification.

“We were very well received and it was needed,” the priest said. “They told me they felt helpless during that journey from South America to Mexico and at least one of them lost their life at sea.”

The prison manager told the priest that he sympathized with the young group, saying he believed they were not criminals but were searching for a better life.

“Some of them told me that they left after the 2010 earthquake to work before the World Cup, and they felt under a lot of discrimination and persecution and were being pushed out, and that caused them to leave,” Father Jean-Mary said.

He added that he planned to speak with both the Florida-based consulate of Haiti and the Haitian ambassador to the U.S. in Washington to see if something can be done — perhaps setting up a mobile response team to help the young detainees acquire lost visas and passports in order to expedite their processing and asylum requests.

The Haitians are feeling isolated and culturally disoriented in the Colorado facility.

The priest said he had just sent them some Haitian movies “because the guards do allow them to watch movies. That will help them relax and connect with their homeland.

“It was a very emotional experience and a sense of great joy to meet with them and celebrate Mass with them. At the same time, to see the young men and women who had already studied in trade schools or universities in Haiti to end up where they are it is very difficult,” Father Jean-Mary said.

“After such a journey they hope to be able to stay in the U.S., to live here and develop their potentials because they have no hope in Haiti,” he added. “We hope they are not deported.”