Clergy differ on bill to repeal the Johnson Amendment 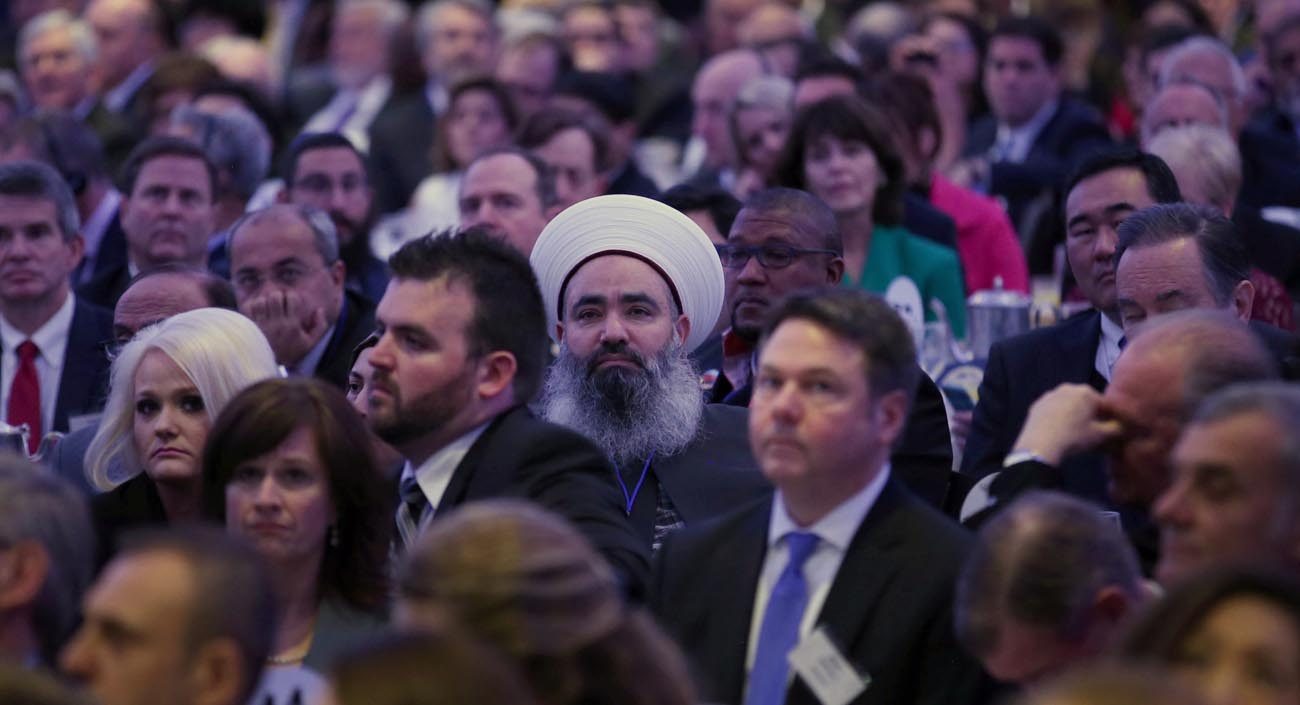 Guests listen as U.S. President Donald Trump speaks during the National Prayer Breakfast Feb. 2 in Washington. Trump told guests he wants to "get rid of and totally destroy" the Johnson Amendment. A bill to repeal it the Free Speech Fairness Act has just been introduced in the U.S. House. (CNS photo/Carlos Barria, Reuters)

WASHINGTON (CNS) — People of goodwill can disagree on matters of public policy — even if they’re ordained clergy, and the public policy under debate has the potential to affect the way they conduct their ministry.

The issue is the Johnson Amendment, a 1954 rider inserted by then-Sen. Lyndon Johnson into that year’s version of the tax code banning all federally recognized nonprofit organizations — including religious organizations — from endorsing candidates and otherwise participating in partisan political activity at the risk of losing their tax-exempt status.

The Republican Party made repeal of the amendment a plank in its 2016 convention platform, and President Donald Trump vowed Feb. 2 at the National Prayer Breakfast to “get rid of and totally destroy” the Johnson Amendment.

Rep. Jody Hice, R-Georgia, a second-term congressman and a co-sponsor of the Free Speech Fairness Act, as the Johnson Amendment repeal bill has been named, is a former Southern Baptist minister who thinks repeal is a good idea.

Rabbi Jack Moline, president of the Interfaith Alliance, believes repeal would create more problems than it tries to solve.

Until about a decade ago, “I would receive threatening letters” from the IRS that said “we would lose our tax-exempt status if we reviewed political issues,” Hice told Catholic News Service Feb. 3. Those letters, he added, were “very threatening, very chilling.”

Then, in 2008, Hice said, he and 32 other clergy issued endorsements from their pulpits, recorded those endorsements, sent them to the IRS and challenged them to do something about it. The IRS never responded, so Hice was part of a group — this time numbering 160 — that did the same thing the next year. Again, no response. Now, every year, the Alliance Defending Freedom coordinates a similar event.

“Churches have censored themselves right out of participation, right out of keeping their congregations informed,” Hice said. With the Johnson Amendment repealed, “you could address the issues, in my case, from a biblical perspective, and actually endorse a candidate (whose views) that we as a congregation share without fear of losing tax-exempt status or being threatened in any way.”

Hice added the bill would not permit churches to conduct political activities outside of “the normal course of your ministry.” “No-full-page ads” in newspapers would be allowed, although putting something in the church bulletin is OK, he said.

Rabbi Moline, though, believes the opposite to be true.

The bill “would make religious institutions destinations for dark money for political purposes. Since they are 501(c)(3) (shorthand for a federal rule governing nonprofits), they are not only tax-exempt but tax-deductible,” he told CNS Feb. 3. “People who give money to PACs, which have come under attack, will now be able to give money to a 501(c)(3) with less accountability, and the ability to compromise the mission of a house of God,” if the bill became law.

Repealing the Johnson Amendment, Rabbi Moline said, would “create a campaign political atmosphere in houses of worship all over the country. It’s important for people of faith to understand their tradition, but to be sheltered from having to express those values in a political way.”

Rabbi Moline added that under the bill, “the government would essentially be funding campaign activities through the tax base, actually reducing — twice — the amount of money that would otherwise be collected in taxes. They would be exempt from taxes by the institution and also by the contributor.”

Priests for Life founder and its national director, Father Frank Pavone, said in a Feb. 2 statement the Johnson Amendment “has muzzled clergy for too long. It’s time for priests, pastors and other clergy to be able, as the president said, ‘to speak freely without fear of retribution.'”

Tim Delaney, National Council of Nonprofits president, voiced “strong opposition” to the repeal bill. “Nonprofits are already free to exercise their First Amendment rights to advocate for their missions,” he said in a Feb. 2 statement. “Allowing political operatives to push for endorsements would put nonprofits in a position where they become known as Democratic charities or Republican charities and put missions at risk.”

NEXT: After SNAP president resigns, new generation of leadership eyed