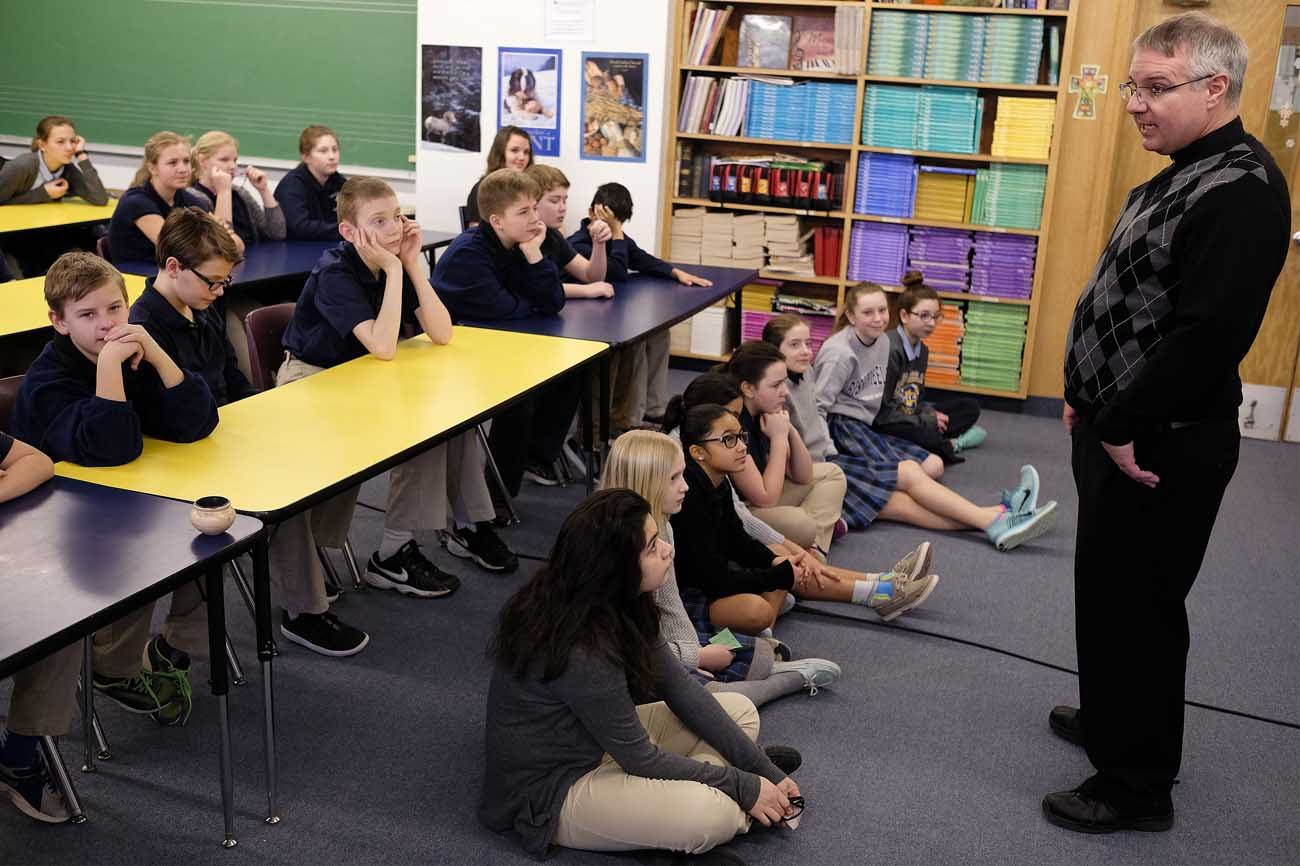 Father Daniel Rupp, pastor of Blessed Sacrament Church in Sioux City, took time Feb. 14 to talk to the students about the importance of Ash Wednesday, the first day of the Lenten season. This year it is March 1.

“How many days is Lent?” the priest asked.

“Forty!” was the nearly unanimous response.

The 40 days associated with Lent is an imitation of the 40 days Jesus spent in the wilderness after his baptism, explained Linda Harrington, former associate professor of theology at Briar Cliff University in Sioux City.

“There are other 40s in the Bible — the 40 days it rained when Noah took the animals into the ark and the 40 years the Israelites wandered in the desert after leaving Egypt before entering the Promised Land,” she said. “Some sources say periods of 40 days — or years — designate times of testing or trial.”

Harrington pointed out that since Sundays are not fast days, counting back 40 days beginning with Holy Saturday, and skipping the Sundays, one lands on a Wednesday.

“Hence, Lent begins on Wednesday,” she told The Catholic Globe, Sioux City’s diocesan newspaper. “Since we use ashes as a symbol of our intent to ‘turn away from sin and believe in the Gospel,’ it’s called Ash Wednesday.”

Father Rupp discussed the three aspects of the penitential season with the students — prayer, fasting and almsgiving.

“You can pray from a devotional book, or recite the rosary, or you can even go online and print off prayers,” he said, as the students’ eyes lit up with the mention of “online.”

For fasting, Father Rupp admitted many might be giving up candy, as he planned to do.

“You know the Sundays are ‘days off’ from fasting,” the priest confided. “I have found that I can eat enough sweets on Sunday to make up for not having them the entire week.”

Then, with a grin, Father Rupp added: “You’ve got to know the loopholes.”

Student Ethan Lamson also planned to give up candy for Lent, but he was uncertain what others in his family might be giving up.

“What are you giving up?” he asked his twin brother, Max.

Before going through an exercise of placing ashes on students’ foreheads, Father Rupp discussed the meaning behind the ashes.

“The ashes remind us of death,” he said. “It’s a reminder of how we have to get our act together before we die.”

Although students had correct answers for almost all of Father Rupp’s questions, he stumped them with his inquiry on whether Ash Wednesday was a holy day of obligation, which it is not.

Sister Esther Mary Nickel, associate director of the Sioux City Diocese’s Office of Worship, felt many Catholics attend Ash Wednesday services because there is a longing for the hope of eternal life.

“Lent, as a penitential season, has been a teacher for thousands of years of the fruitfulness of self-discipline,” she said. “It is a fruitfulness that flourishes in a deeper love of God, which pours out also into love of neighbor.”

The Religious Sister of Mercy of Alma, Michigan, emphasized that Lent is not for “stoic practices of self-mastery” or simple fidelity to a “new and improved diet plan.”

“It is a time to overcome self-absorption and to look to others and, with the help of God’s grace, to serve others by the corporal and spiritual works of mercy,” she said.

Harrington felt many people attend Ash Wednesday services because “we all have a sense that our relationship with God” could be better.

“We acknowledge we need help — from God and from other believers — to get back on track,” she said. “The services on this day are an explicit, public acknowledgment of that fact.”

Student Grace Nelson agreed with the “public” aspect of the sacramental.

“It’s nice to show you are Catholic with the ashes on your forehead,” she said. “It also provides an opportunity for you to explain your faith to others who ask you about it.”

PREVIOUS: Border bishops call for dignity regardless of ‘migration condition’