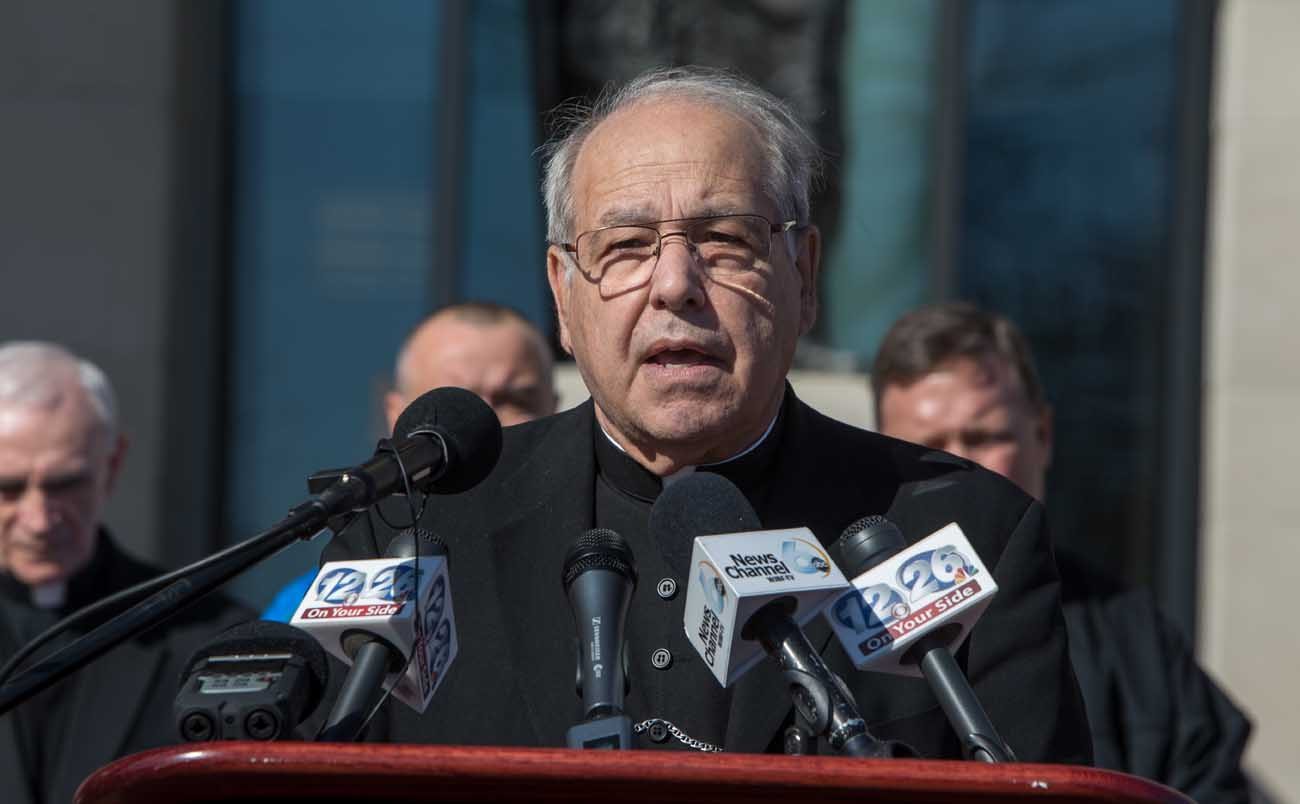 “We have great respect for the legal system and we believe Murray deserves punishment for the brutal murder, but the sentence of death only perpetuates the cycle of violence,” Bishop Estevez said at a news conference. “It is unnecessary and denies the dignity of all persons.”

Bishop Estevez, Archbishop Wilton D. Gregory of Atlanta and Bishop Gregory J. Hartmayer of Savannah, along with priests, deacons and other supporters, gathered outside the Richmond County Courthouse in Augusta to issue their appeal.

Murray, 29, has admitted in interviews to killing Father Rene Robert, 71, a priest of the Diocese of St. Augustine, who befriended him as part of his prison ministry. He is charged with first-degree murder, which carries a sentence of life or death.

On April 11, Murray kidnapped Father Robert, forced him into the trunk of his car and then allegedly shot him multiple times in rural Georgia. Murray was arrested in South Carolina driving Robert’s stolen car.

He stated that should he die as a result of a violent crime, he did not want the individual or individuals found guilty of homicide for his killing to be subject to, or put in jeopardy of, the death penalty under any circumstances, no matter how heinous their crime or how much he may have suffered.

Wright has recently been named a Superior Court judge. After the news conference, the bishops talked privately to Hank Syms, acting district attorney, and Bishop Estevez gave him petitions with 7,400 signatures.

“Father Robert shows us what the Gospel teaches about being merciful,” Bishop Hartmayer said. “He understood the plight of the poor, the violent, the sociopath. He treated them with compassion. He understood the risks and dangers of ministering to convicts. He died as a martyr of mercy.”

“We know that every human life comes from the hand of God and has dignity that is never lost, that can’t be compromised,” Archbishop Gregory said. “No human life loses its dignity.”

The bishops said that if Murray is convicted, he could be sentenced to life without parole.

“We hope if he is granted a life sentence that he find within his own heart and spirit to ask for God’s forgiveness. That could take many years, but we are asking that he be given time to do it.

“We do it because we love our faith, we love our country, and we hope our nation will take the lead in preserving, defending and protecting every human life.”

Archbishop Gregory said if their appeal is turned down, “we will work harder. We won’t be deterred by a negative decision. We will be reinvigorated to work harder.”

Priests and deacons from the three dioceses joined the bishops.