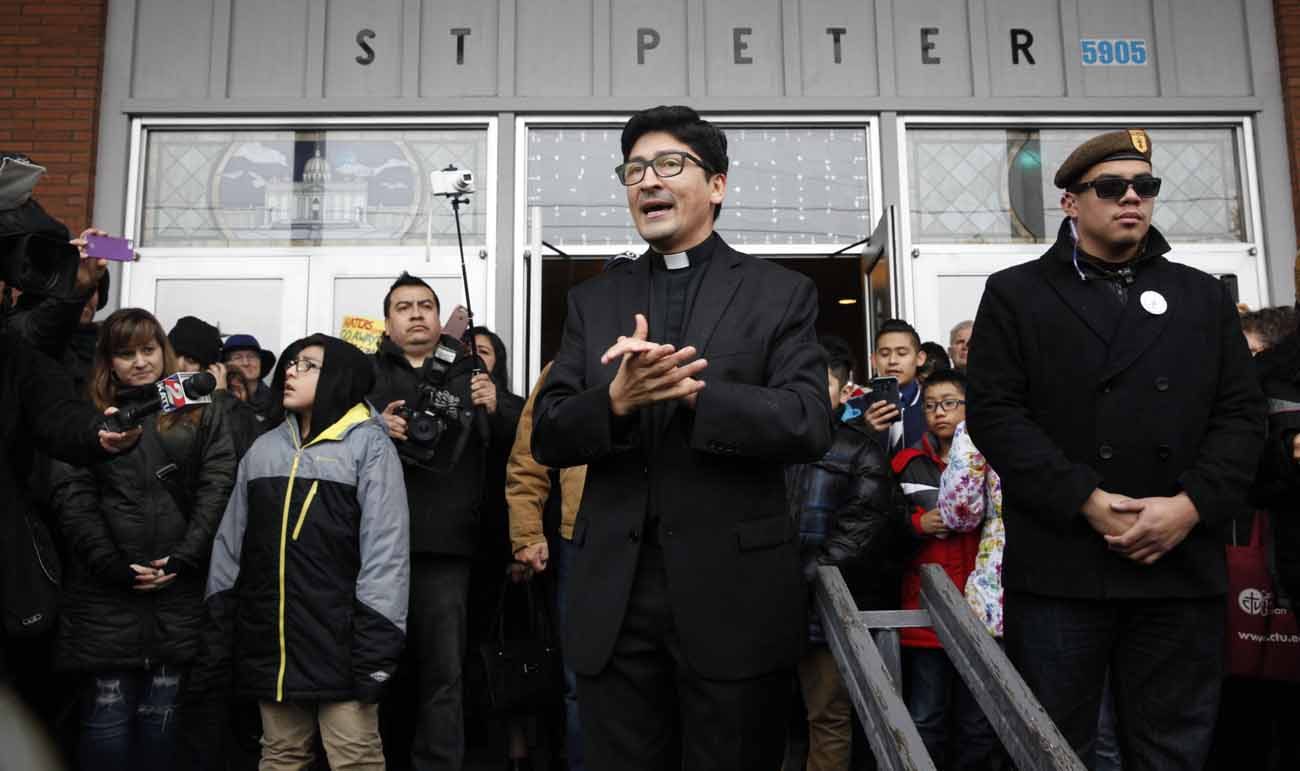 Father Raul Marquez of St. Peter Parish in Portland, Oregon, thanks people who came to stand vigil outside his church Feb. 5. The crowd formed a human shield a week after a group of eight men stood outside the front door of the church during a Spanish Mass and yelled insults about Catholicism, immigrants and the morals of the parish women. (CNS photo/Francisco Lara, Catholic Sentinel)

PORTLAND, Ore. (CNS) — Father Raul Marquez had never seen anything like it. Eight men walked to the front door of St. Peter Church in Southeast Portland Jan. 29 and began bellowing during the Spanish Mass.

Dressed like hunters, they accused worshippers of not being true Christians, questioned the sexual morals of the women and harangued the congregation for being made up of immigrants.

The group, which calls itself “Street Preachers,” has been setting up counter-protests at events criticizing President Donald Trump, including a late-January demonstration at Portland International Airport.

The harmony that naturally comes from Mass was shattered. The community, already living in fear because of federal immigration policy proposals, was shocked.

“All that Sunday I felt upset and didn’t understand,” said Father Marquez, a Colombian native who has been pastor of St. Peter for five years. “How I was going to be happy while I heard and remembered the verbal insult? I was looking for an answer.”

The Gospel reading of the day said, in part, “Blessed are you when they insult you and persecute you and utter every kind of evil against you.”

The following Sunday, Feb. 5, an answer to the priest’s question came and the fear was soothed as more than 300 people formed a human shield in front of St. Peter Church during Masses. News of the previous week’s attack had gone out on social media, drawing the crowd that stood in silence, holding signs.

“I didn’t expect this outpouring of love for us,” said Alberto Gonzalez, a native of Oaxaca, Mexico, who has been a member of St. Peter for 18 months. “This time is very difficult for us and here we are surrounded by love of all of the American people, who came to show they are here, we are one, we are one community.”

With tears in his eyes, Gonzalez said he has not felt supported until now. At first, he thought the large group of white people had come to hurl more invective, but then he saw they had come to protect their brothers and sisters.

“This is solidarity,” Gonzalez told the Catholic Sentinel, newspaper of the Portland Archdiocese. “This is love.”

Parishioners got a lesson in nonviolent response to harassment. A table of coffee and sweets was put up near the front door of the church for protectors who came out despite chilly rain.

Joining Father Marquez in a sign of support were Father Ron Millican from nearby Our Lady of Sorrows Church and the Rev. Elizabeth Larson from St. Mark Lutheran Church.

“I wanted to come here and hug each person,” Rev. Larson said.

Father Millican invited his parishioners to come and show support. “We need to be together,” he said. “It is very sad that it takes something like this to make us come together. But it is beautiful — the outpouring of support for the dignity of everyone.”

Nona Carrasco was one of those outside who got completely wet. “This is my community,” Carrasco said. “I don’t stand for bigotry. I will stand for my community and this is what we do.”

Also in the crowd was Matt Cato, director of the Archdiocese of Portland’s Office of Life, Justice and Peace.

Father Marquez received hundreds of messages of support. The first was a letter from Portland Archbishop Alexander K. Sample, who told the people of St. Peter Parish he stands with them.

“I was saddened beyond words to learn of the terrible experience that many of you encountered as you came to church last weekend,” the archbishop said in his letter. “It is so tragic that you were coming to celebrate God’s love and mercy and yet you experienced cruelty and hatred at the hands of severely misguided protesters.

“I am especially upset to learn of the verbal abuse heaped upon members of our Hispanic community” and also what was “directed against women in your community,” he said, calling it “vile behavior.” Archbishop Sample also noted that the same group was targeting other churches as well.

“Please be assured that I, as your archbishop and shepherd, stand firmly with you in the face of such ignorant and hateful words,” the archbishop told parishioners. “You are our brothers and sisters, and as members of the same family of faith, we must hold fast to our unity in Christ. … Be assured of my love and prayers for all of you.”

After the Feb. 5 Mass, Father Marquez walked out to thank supporters. He could barely move as people hugged him and asked for his blessing.

“This is the time to live the Gospel radically by praying for those men and their few sympathizers and to intentionally forgive them,” the priest said.

Rios is editor of El Centinela, the monthly Spanish-language newspaper of the Portland Archdiocese.

NEXT: New York Archdiocese to close schools, convert one to pre-K education