It comes down this: Two games in one legendary place 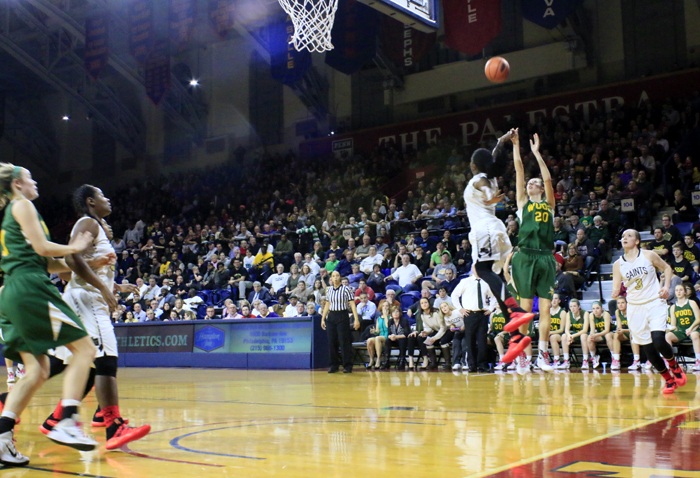 And then there were two.

O’Hara, however, grinded out every possession, leaving the Saints annoyed and uncomfortable. Ahead by 30-18 at halftime, O’Hara refused to let up, outscoring the Saints by 14-11 in the final stanza.

After beating Lansdale Catholic in the league quarterfinals a week earlier, O’Hara’s players had talked about offensive balance as being the key goal heading into the semis. The Lions reached their aspiration in abundance. Kenzie Gardler led with 19 points. Maura Hendrixson scored 15. Mary Sheehan chipped in with 10 and Hannah Nihill added nine. For Goretti, Nixon scored 12 and Jabria Ingram added 11.

“We’re much better when we are sharing the ball,” said Sheehan, who will play at St. Joseph’s University next year. “Being unselfish is so important to doing what we want to do.”

O’Hara will need a similar effort to stop Archbishop Wood, which rampaged through the league undefeated. In the Vikings’ 52-37 semifinal victory over Archbishop Carroll, Cassie Sebold scored 16 while the May sisters, Katie and Shannon, tallied 12 and 11, respectively.

Carroll stayed close until the fourth quarter before a 17-7 spurt eliminated potential drama.

“As a team we played really well, with everyone contributing,” said junior Katie May. “Carroll is a really good team, so we had to play really well to win, which we did.

“We focused on defense all week and it paid off, thankfully. I think we are all as focused as we have ever been.”

May admitted that there is “pressure” being the defending champ.

“Everyone wants to win, especially for the seniors,” she said. “They have worked so hard for four years and they are great leaders.”

Shannon May, a senior, will return to the Palestra for a fourth consecutive year.

“I’m excited,” she said. “I was prepared to play (O’Hara), so I am not surprised. They’re a very good team with have great shooters, but we’re a really good team, too. I think it’ll be a good game.”

Wood’s male counterparts will try to defeat Neumann-Goretti for the second time this season. The Vikings received 33 points and 11 rebounds from league MVP Collin Gillespie, and 10 points apiece from Matt Cerruti and Karrington Wallace, in a 75-66 league semifinal victory over Archbishop Ryan. In defeat, Izaiah Brockington poured in 31 points.

The Vikings will face a Neumann-Goretti program that has lost in the past two Catholic League finals. In N-G’s semifinal, despite a very spirited effort by two-time defending champion Roman Catholic, the Saints emerged with a 67-56 triumph.

“I’m happy for our players and coaches,” said N-G coach Carl Arrigale. “It’ll be nice to have a chance to win the championship.”

PREVIOUS: In Vetter, selflessness is at ‘the heart of the team’