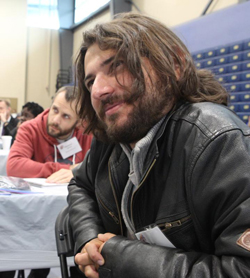 Juan Grabois, an attorney with the Confederation of Workers of the Popular Economy in Buenos Aires. (CNS/Dennis Sadowski)

MODESTO, Calif. (CNS) — Grass-roots organizing that seeks to overcome what Pope Francis has called “the economy of exclusion” is vital to the work of the Catholic Church, said an Argentine attorney who has stayed friends with the pontiff for a decade.

“We are helping church, the institutional church, if you want to say, in this mission because church is like an iceberg,” said Juan Grabois of the Confederation of Workers of the Popular Economy in Buenos Aires, the pope’s hometown. “It’s imperative (to organize). We see the bishops, maybe the priests, maybe the pope, but the real church is the holy people of God, which is at the bottom. We are helping the tip of the iceberg to do its job.”

Grabois chose strong words during a media briefing Feb. 18 to explain the work of his organization and dozens of others that gathered for the U.S. Regional World Meeting of Popular Movements in California’s Central Valley. He said the efforts of popular movements is needed in a world where people are being left by the wayside in an economy in which a privileged few accumulate great wealth.

He also stressed that the widespread crackdown on unauthorized people in the U.S. poses moral questions for the Catholic Church on how it will react to protect those threatened with deportation.

The threat to immigrants and families has existed for years and extends from an unjust social structure that allows racism to remain in place worldwide, said Grabois, who was named a consultor to the Pontifical Council for Justice and Peace by Pope Francis in November.

“Now it’s worse. But racism, this problem of raids, is not a new problem,” Grabois said. “Now there are people who say it in a non-politically correct way. The problems are not going to be solved with euphemisms and supposedly solidarity systems.

“The same power structure that causes the real roots of forced migrations, of violence, of imprisonment, of racism, they are intact and they’re here for at least 25 years. So they are structural problems. It’s not just a problem of the last three weeks or last two months,” he said.

Grabois, 33, told Catholic News Service he met Pope Francis when confederation leaders decided to invite then-Cardinal Jorge Bergoglio to an action to protest the treatment of Bolivian textile workers at a Buenos Aires factory about 10 years ago.

“We asked him one time to come. We sent a letter, but with not great hopes and not great interest,” Grabois recalled.

“He didn’t come, but he called us. We had a conversation (about) what social movements were doing, the new forms of discrimination, exclusion. We were very surprised by his approach. For instance, (he said the) pandemic of crack in Buenos Aires as something designed, not something accidental. He spoke about the planned extermination of slum-dweller boys. So we started having a relationship from that moment onward,” he said.

Occasionally, Grabois would meet the future pope, walking with him to the bus or the subway and discussing the progress on a campaign or efforts to press for worker rights.

Grabois’ contact with the pope has been less frequent since Cardinal Bergoglio’s election as pontiff in 2013. He said Pope Francis will call “on very special occasions, once a year maybe.”

Still, Grabois, said, the mainstream media in Buenos Aires has been critical of the former cardinal, charging that he directs the confederation’s protests. The attorney called such pronouncements nonsense.

“He’s not my boss. I work for the grass-roots movement,” he said.

Yet there is a connection with the pope and the guidance he provides counts for something, Grabois added.

“The pope says he’s the servant of the servant of the people of God. So he never asked us to do anything. He may well disagree with 70 percent of our actions or our work. He just encourages this idea of people self-organizing. The other is our job and our decision.”