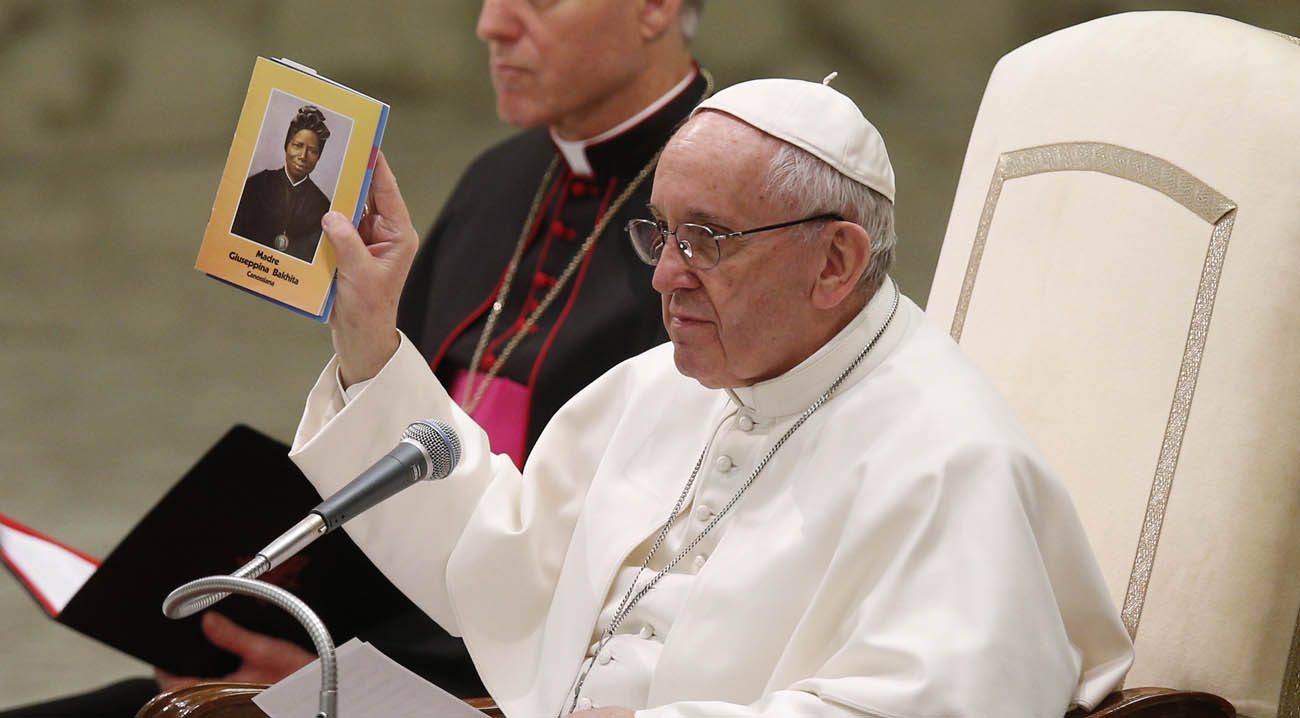 Pope Francis holds a booklet with an image of Sudanese St. Josephine Margaret Bakhita during his general audience in Paul VI hall at the Vatican Feb. 8. Marking the feast of St. Bakhita, a former slave, the pope urged Christians to help victims of trafficking and migrants. (CNS photo/Paul Haring)

For the Catholic Church, St. Bakhita’s feast day, Feb. 8, is a day of prayer for victims of trafficking.

Pope Francis asked government officials around the world to “decisively combat this plague” of human trafficking, paying particular attention to trafficking in children. “Every effort must be made to eradicate this shameful and intolerable crime.”

Describing St. Bakhita as a “young woman who was enslaved in Africa, exploited, humiliated,” Pope Francis said she never gave up hope and, finally, she was able to migrate to Europe.

Holding up a booklet with a photograph of the Sudanese saint, who died in Italy in 1947, the pope continued telling her story. In Europe, he said, “she heard the call of the Lord and became a nun,” joining the Canossian Daughters of Charity.

“Let us pray to St. Josephine Bakhita for all migrants and refugees who are exploited and suffer so much,” the pope said.

“And speaking of migrants who are exploited and chased away, I want to pray with you today in a special way for our Rohingya brothers and sisters,” the pope continued. “These people, thrown out of Myanmar, move from one place to another because no one wants them.”

Pope Francis told the estimated 7,000 people at his audience that the Rohingya, who are Muslim, “are good people. They are our brothers and sisters. They have been suffering for years. They have been tortured, killed, just because they want to keep their traditions and their Muslim faith.”

He led the audience in praying the Lord’s Prayer “for our Rohingya brothers and sisters.”

In a report released Feb. 3, the U.N. High Commissioner for Human Rights said since October, there had been escalating violence against the Rohingya in Myanmar. The report cited eyewitness reports of mass gang-rape, killings — including of babies and young children — beatings, disappearances and other serious human rights violations by the country’s security forces.

An estimated 66,000 Rohingya have fled to Bangladesh since October, the report said.

The recent violence, the U.N. said, “follows a long-standing pattern of violations and abuses; systematic and systemic discrimination; and policies of exclusion and marginalization against the Rohingya that have been in place for decades in northern Rakhine state.”

In his main audience talk, Pope Francis continued to discuss the characteristics of Christian hope, which should be both tender and strong enough to support those who suffer and despair.

The Gospel does not call Christians to pity the suffering, but to have compassion, which means suffering with them, listening to them, encouraging them and offering a helping hand, the pope said.

The Gospel calls Christians “not to build walls, but bridges, not to repay evil with evil, but to defeat evil with goodness (and) offense with forgiveness, to live in peace with all,” he said. “This is the church. And this is what Christian hope accomplishes when it takes on the strong and, at the same time, tender features of love.”

NEXT: No nation is free of organ trafficking, say speakers at Vatican summit