Be Christians of substance, not appearance, pope says at Angelus 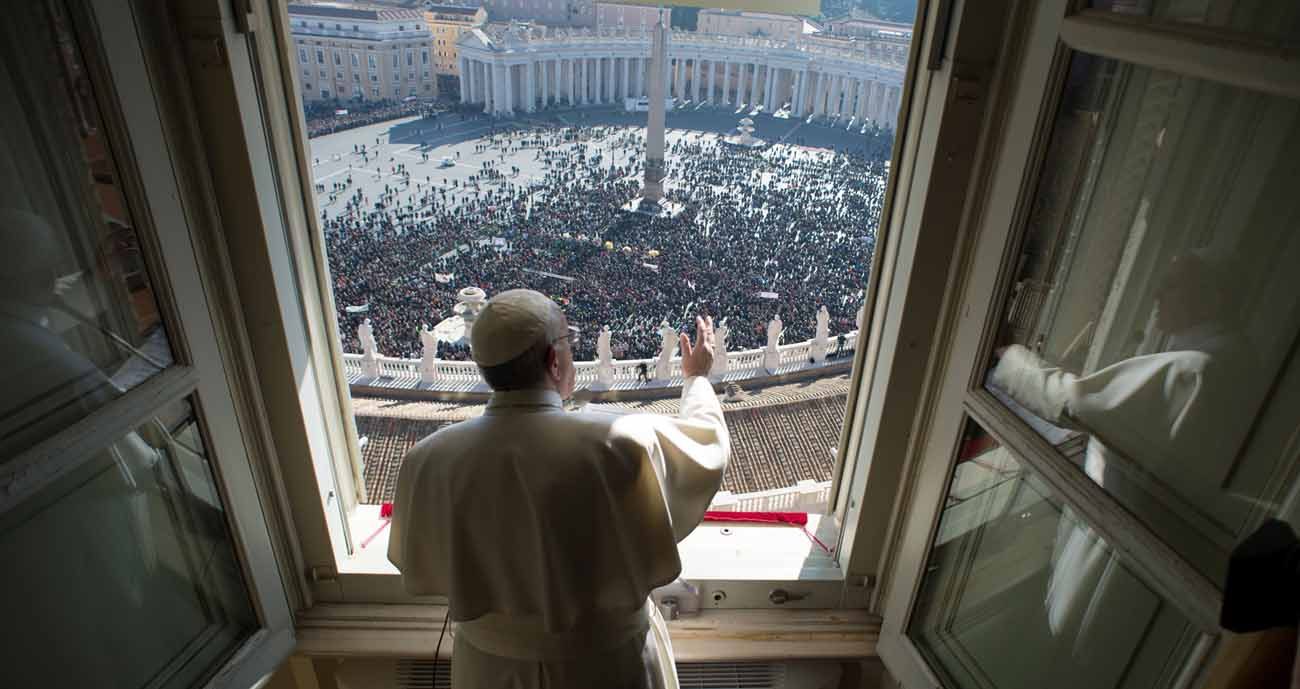 Pope Francis greets the crowd as he leads the Angelus from his studio overlooking St. Peter's Square at the Vatican in this Jan. 29, 2017, file photo. (CNS photo/L'Osservatore Romano, handout)

VATICAN CITY (CNS) — Obeying the true spirit of the commandments and not just a literal interpretation of them is what makes Christians become authentic witnesses, Pope Francis said.

As seen through Mary’s example, following the commandments “is possible with the grace of the Holy Spirit which enables us to do everything with love and to fully carry out the will of God,” he said Feb. 12 before reciting the Angelus with visitors gathered in St. Peter’s Square.

“May the Virgin Mary, woman of docile listening and joyful obedience, help us to approach the Gospel not just having a Christian ‘facade,’ but being Christian in substance,” he said.

The pope reflected on the Sunday Gospel reading from Matthew, in which Jesus explains to his disciples the Mosaic law and warns that “unless your righteousness surpasses that of the scribes and Pharisees, you will not enter the kingdom of heaven.”

This righteousness, the pope said, must be “animated by love, charity and mercy” in order to fulfill the true purpose of the law and “avoid the risk of formalism,” which is strict adherence to prescribed laws.

In the Gospel reading, Jesus focused on three specific commandments: against murder, adultery and swearing.

While insulting someone “does not have the same gravity and culpability as murder,” the pope said, Jesus affirms that the commandment is violated by behavior “that offends the dignity of the human person.”

“We are used to insulting; it’s like saying ‘good morning,'” the pope said. “One who insults his brother, kills his brother in his heart. Please, do not insult! We gain nothing.”

Just like murder, theft, corruption and other sins, the pope said, adultery “is first conceived in our innermost being and, once the mistaken choices are carried out in the heart, they are acted out in concrete behavior.”

Finally, swearing in God’s name “is a sign of insecurity” and using God’s authority to “guarantee our human affairs,” the pope said.

Christians are called to build trust in their families and communities, he said “rather than resorting to higher interventions in order to be believed.”

After reciting the Angelus prayer, Pope Francis once again reminded the pilgrims to fulfill the commandments as Christ did.

NEXT: Jealousy threatens fellowship in families, among clergy, pope says