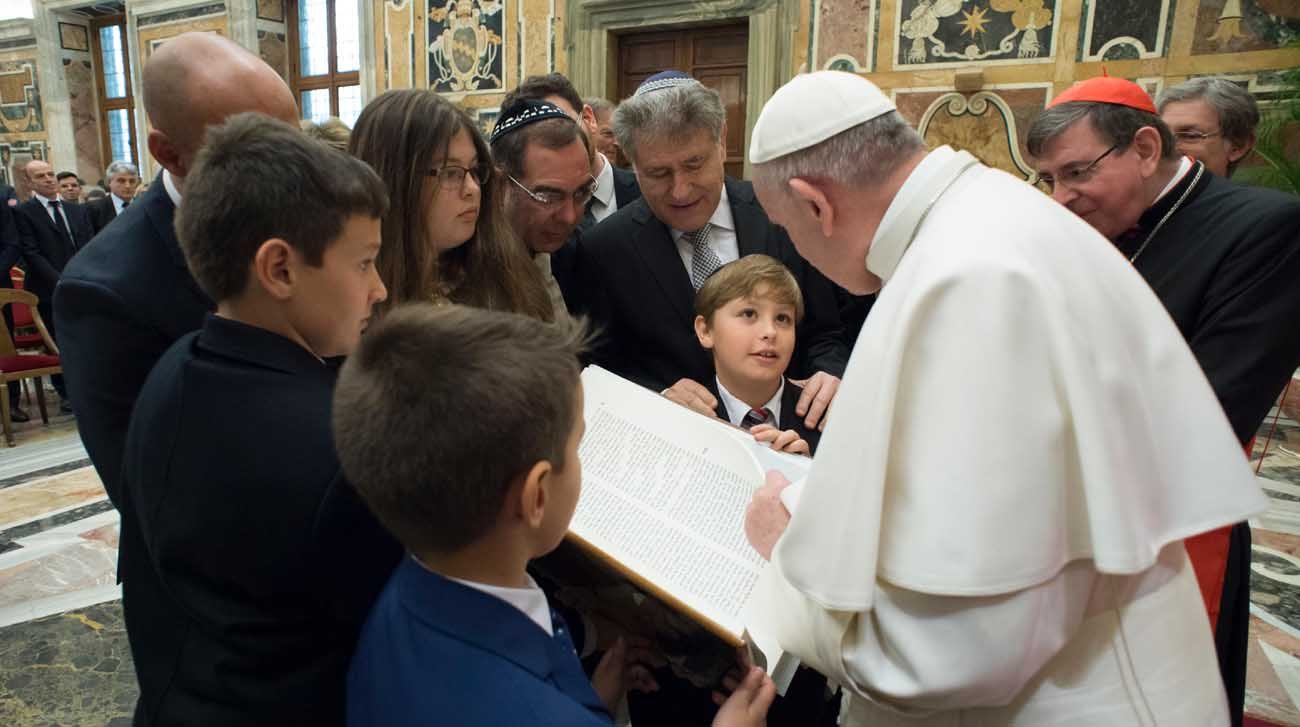 Pope Francis accepts an illustrated copy of the Torah during a meeting with Rabbi Abraham Skorka, center, and an interreligious group of scholars at the Vatican Feb. 23. Rabbi Skorka, rector of the Latin American Rabbinical Seminary and a longtime friend of the pope, led the group in presenting the Torah to the pope. (CNS photo/L'Osservatore Romano)

VATICAN CITY (CNS) — The Torah, the first five books of the Bible, tell the story of God’s love for humanity and his desire that people live in harmony with one another and with the created world, Pope Francis said.

“In the midst of so many human words that lead to tragic division and rivalry, these divine words of covenant open before all of us paths of goodness to walk together,” Pope Francis said as he was given an illustrated copy of the Torah with an introduction and notes written by an international, interreligious group of scholars.

Argentine Rabbi Abraham Skorka, rector of the Latin American Rabbinical Seminary and a longtime friend of Pope Francis, led the group presenting the Torah to the pope at the Vatican Feb. 23.

Those involved in creating the volume, published by Spain’s Arte Scritta, come from “three continents, three generations and three religions,” the rabbi said. The group also plans to publish an edition of the four Gospels and of the Quran, as well.

“This is intended as a small, yet very significant cry to eradicate the hatred and animosities that are so tragically perceived today,” Rabbi Skorka told the pope.

The Torah, Pope Francis told the group, “manifests the paternal and visceral love of God, a love shown in words and concrete gestures, a love that becomes covenant.”

“God is the greatest and most faithful covenantal partner,” the pope said. “God desires a world in which men and women are bound to him and as a result live in harmony among themselves and with creation.”

The small “covenant” formed among the people involved in the Torah project, he said, has resulted in a volume that communicates “a cultural vision of openness, mutual respect and peace” that echoes the spiritual message of the biblical text.

NEXT: Ghanaian bishops: Avoid vices to keep Ghana as ‘Star of Africa’