For members of Siervas, ministry spans service, music for the soul 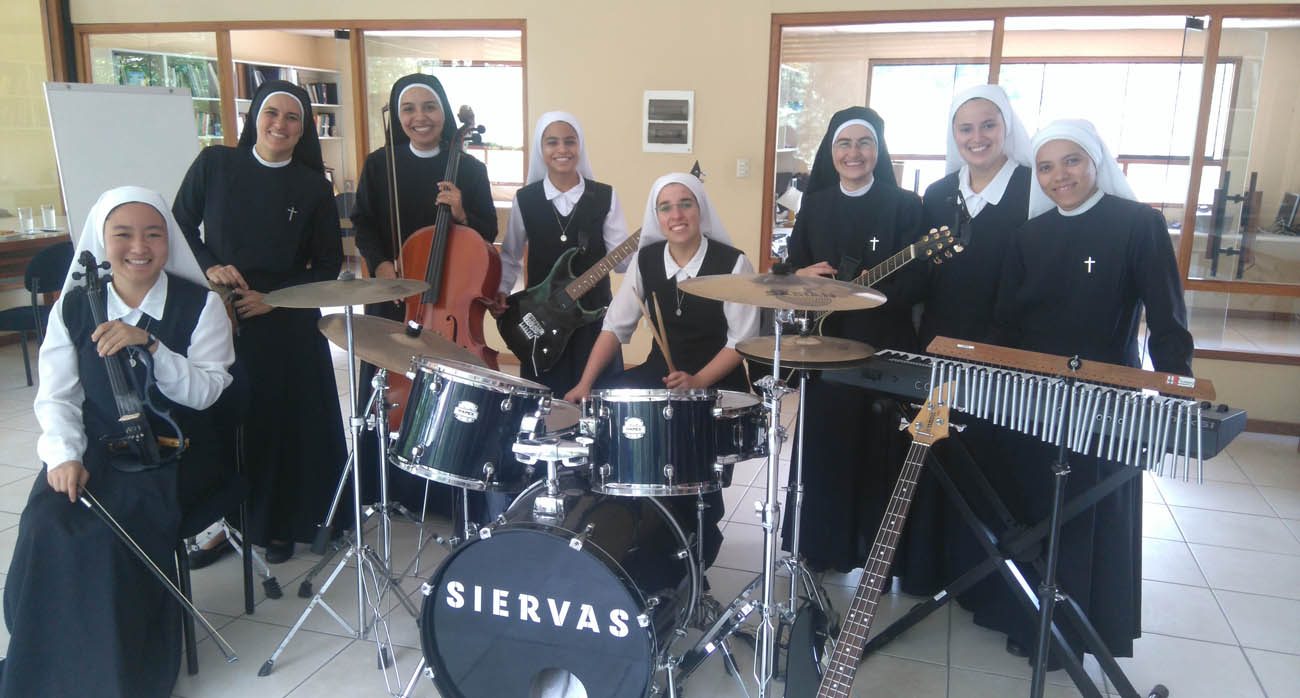 Members of the pop band Siervas pose for a photo Jan. 22 in their music room in Lima, Peru. The 12 women, who are members of the Servants of the Plan of God, have taken their inspirational music to other countries but also do social service work in Peru. (CNS photo/courtesy Lukas Isaac)

LIMA, Peru (CNS) — When people wave at members of the pop band Siervas as they drive through the city, the nuns in the musical group know they’ve arrived on the world stage.

The 12 women religious in the group — The Servants in English — have taken their inspirational music to other countries and created hits that their fans sing and carry in their hearts.

But although music is a big part of their lives, the sisters, members of the Servants of the Plan of God, also are focused on serving others. Since mid-January, their main concern has been tending to the people recovering from mudslides and floods that affected the area where their convent is located.

“I have been living here for the last 18 years and, until this year, we had only ever had one mudslide,” Sister Monica, a Peruvian, told Catholic News Service in late January. “Now we have had four in the last month.”

The sisters helped 30 local families get back on their feet after their homes were seriously damaged by rushing water.

It’s a delicate balance for the sisters to juggle their social ministry and their musical passion.

“Monday and Friday afternoons are for group rehearsals and most of the nuns practice every day as well. But we also visit three different jails one morning a week, work in schools, with the homeless and people with physical handicaps, as well as with a children’s home for young people who have parents in prison or who can’t look after them,” Sister Monica said.

That social ministry is what attracted many of the sisters to the order.

“Many of the nuns come to us through the social work we do,” Sister Monica explained. “They realize how much they love helping people and how happy it makes them. We do things like provide clothes and shoes for the people living high up in the Andes where they can sometimes literally freeze to death. They (potential sisters) find God through volunteering and want to get involved more deeply and become nuns. That is what happened to me.”

The group’s hit single “Confia en Dios” (“Trust in God”) introduced Siervas to an international audience and led to an invitation to sing before a February 2016 Mass celebrated by Pope Francis in Ciudad Juarez, Mexico, in front of an audience of 250,000.

“It felt absolutely amazing singing to so many people. I am not sure if we will ever play to that kind of audience again” Sister Monica said.

Members come from several countries, including Japan, Philippines and, of course, Peru, and a variety of musical backgrounds. The group recently released its second CD, “Hoy Despierto” (“Wake up Today”).

The combination library and music room where Siervas rehearses is filled with instruments: cellos, bass guitars, keyboards, speakers and a large drum kit. As the sisters warm up, they introduce themselves.

Sister Cindy, from Venezuela, studied in a musical conservatory and has played the cello all her life. Sister Camila, from Peru, only started learning the electric guitar a year ago but has shown she’s a natural. One of the lead singers, Sister Yvonne, studied music, and her sister plays the bass guitar.

They started playing as a way to express their faith and love of God about three years ago. Sister Andrea, from Argentina, writes the lyrics and Sister Yvonne, from Chile, composes the melody. Once they have a rough version, the other sisters provide feedback and make small changes.

Many people are drawn to the sisters because of their music. A donation from an anonymous donor funded a music video and the second CD.

Sister Monica laughed at the suggestion that the group had gone “rock ‘n’ roll” because of the video, which was filmed atop a helipad overlooking Lima. All of the sisters were dressed in religious habits, which they wear every day and see as an important symbol of their faith.

“We weren’t always nuns,” she said. “We were brought up in the 21st century as well, listening to different types of music and using Facebook and YouTube. Why shouldn’t music come from God in a pop format?”

Three members of the musical group are novices and have three years to decide whether religious life is the right path for them; the youngest is 20 years old.

The sisters said “Confia en Dios” gets the most attention. The song talks about the difficult moments people have as they go through challenging times and how it is important to remember that those times provide a sense of God’s plan.

As for their musical career, the sisters said it is God who guide the group’s direction, as long as they continue to have the time to carry out their much-needed ministry of service to the people in the communities around them.

“I find that music has made me appreciate God more deeply,” Sister Monica said. “The lyrics are a way of showing their faith.”