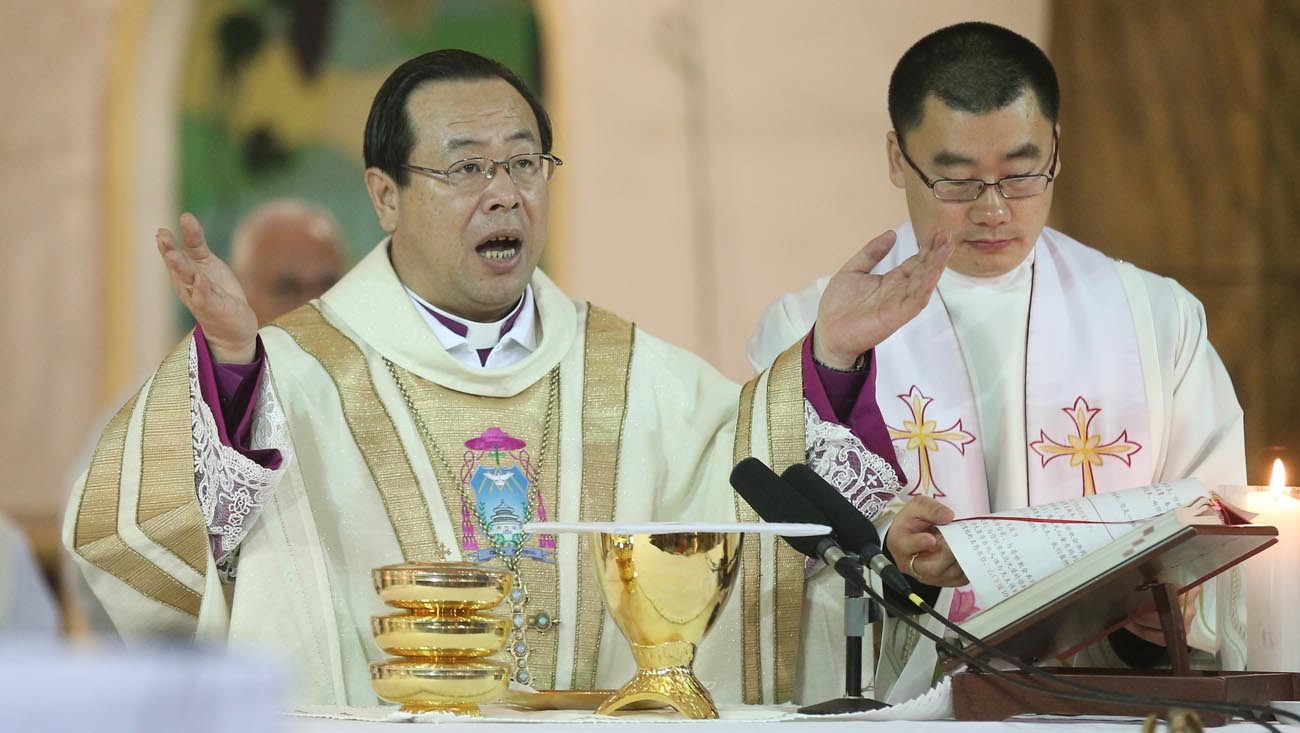 Archbishop Joseph Li Shan of Beijing celebrates Christmas Eve Mass in 2016 at the Cathedral of the Immaculate Conception. China and the Vatican have reached consensus on the appointment of bishops, which will lead to the resolution of other outstanding problems, said Hong Kong Cardinal John Tong. (CNS photo/Wu Hong, EPA)

WASHINGTON (CNS) — China and the Vatican have reached consensus on the appointment of bishops, which will lead to the resolution of other outstanding problems, said Hong Kong Cardinal John Tong.

“From now on, there will be no more the crisis of a division between the open and underground communities in the Church in China,” the cardinal said. “On the contrary, these two communities will gradually move toward reconciliation and communion on the aspects of law, pastoral care and relationships. The church in China will work together to preach the gospel of Jesus on the soil of China.”

In a letter published Feb. 9, Cardinal Tong note that China and the Vatican have different interests, so they will prioritize remaining problems differently.

“The Chinese government is concerned with problems on the political level, while for the Holy See, the problems are on the religious and pastoral levels,” he said.

The Vatican and China, which severed diplomatic ties in 1951, have had on-again, off-again talks since the 1980s. Under Pope Francis, the two restarted a formal dialogue in 2014.

The dialogue has been examined from a political perspective, but Cardinal Tong said he wanted to offer a religious perspective. He first wrote of the dialogue last August and said he received much positive feedback.

“If the pope has the final word about the worthiness and suitability of an episcopal candidate, the elections of local churches and the recommendations of the Bishops’ Conference of the Catholic Church in China will simply be a way to express recommendations,” Cardinal Tong said.

The role of the government-controlled patriotic association has been seen as a stumbling block in China-Vatican relations, but this move would turn it into a “voluntary, nonprofit, patriotic and church-loving organization composed of clergy and faithful from all around the country,” Cardinal Tong said.

China requires Catholic leaders to register with the patriotic association, and some bishops have refused. On some levels, this has led to so-called unofficial or underground and official or registered communities within the Catholic Church.

But Cardinal Tong said Catholics in both communities “are actively seeking and expressing complete communion and unity with the universal church.” Although some bishops were ordained without the permission of the pope, “they still make every effort to explain to the pope afterwards and ask for his understanding and acceptance,” the cardinal said. “Of course, if all the requirements are fulfilled, they will be absolved, accepted and probably be entrusted with the power to govern dioceses.”

The cardinal noted that seven bishops are currently “under the condition of excommunication” because of their illegitimate consecrations as bishops; some also have problems with moral conduct. Cardinal Tong said Pope Francis can lift the excommunications, if conditions permit, and the issues of moral problems would most likely be dealt with separately.

To be pardoned, offending bishops must write the pope asking for pardon and showing willingness to be in communion with the church.

“According to reliable information, all of these seven illegitimately ordained bishops have already sent letters to the pope. They have expressed their willingness to submit themselves to the pope unconditionally and have pleaded for forgiveness,” Cardinal Tong said.

However, the situation could be complicated if the Vatican has already granted another bishop permission to run a diocese that an excommunicated bishop is running. Cardinal Tong said these and other factors might mean resolution of this issue will take more time.

Another issue that will take more dialogue is China’s recognition of those bishops who have refused to register with the government.

Cardinal Tong said the unofficial church community is the result of a special political and historical period.

The cardinal anticipated arguments that China could not deal with the Catholic Church without looking at the situation of other ethnic groups and religions; for instance, the problems of Tibet and Xinjiang. However, he said, people in those regions want autonomy or independence, which the Catholic Church is not seeking.

“The Chinese Catholic faithful are generally patriotic, good citizens, who are not willing to engage in political activity,” Cardinal Tong said. “They are people who will not threaten political and social stability, and the Chinese rulers understand this perfectly. Therefore, they will not put the problems of the Catholic Church and the problems of Tibet and Xinjiang together on the same level.”

Cardinal Tong said he understood that, even with these changes, the church would not have complete freedom as in other countries.

“The choices in front of us are either to embrace the essential freedom now and become an imperfect, but true church, then struggle for complete freedom in the hope of moving toward a perfect church, or we give up essential freedom and have nothing at all, and then wait for complete freedom — but no one knows when this will ever happen. In fact, the moral principle of the church teaches us to choose the lesser of two evils. Therefore, under the teaching of the principle of healthy realism that Pope Francis teaches us, it is clear which path the Catholic Church in China ought to take,” he said.

PREVIOUS: World needs women, not for what they do, but who they are, pope says

NEXT: Catholic prelature in Jerusalem warns of ‘serious consequences’ on settlements