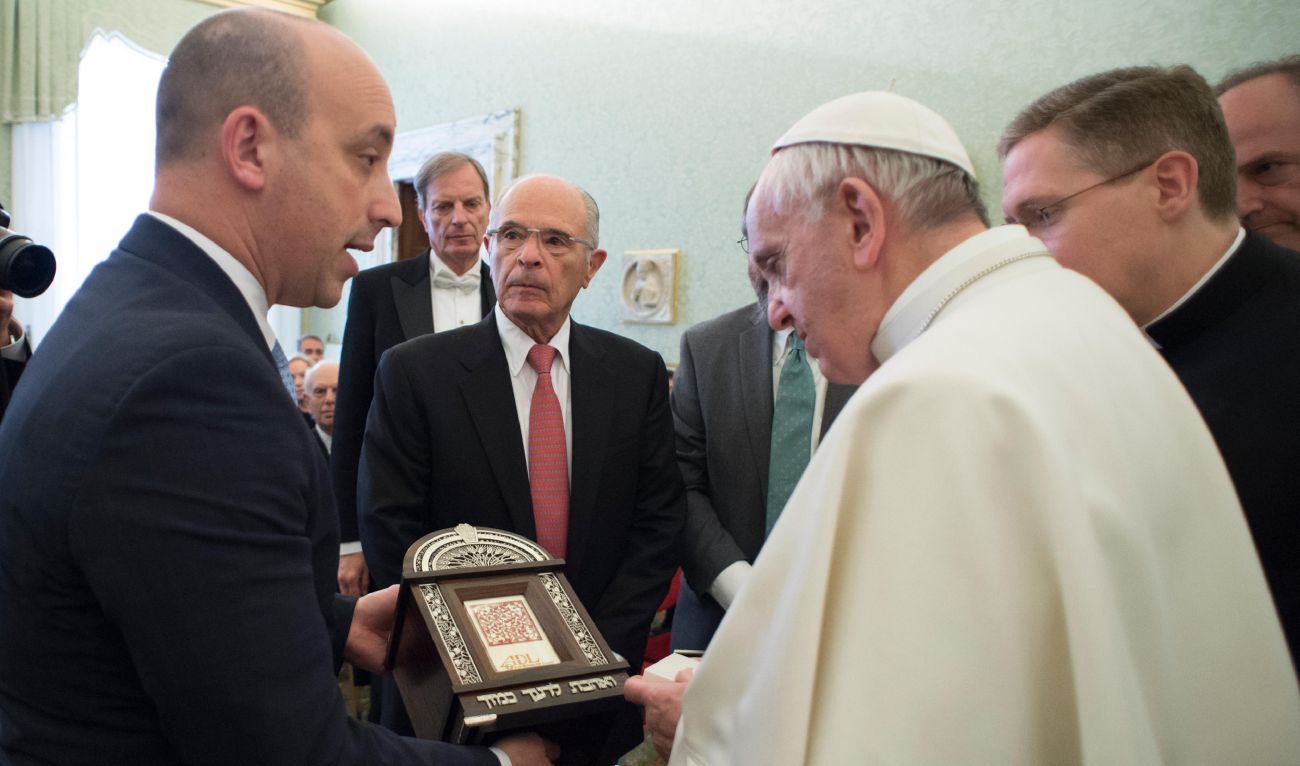 Pope Francis accepts a gift from Jonathan Greenblatt, CEO and national director of the Anti-Defamation League, during a meeting with a delegation from the organization at the Vatican Feb. 9. The pope denounced anti-Semitism and reaffirmed that the Catholic Church has a duty to repel such hatred. (CNS photo/L'Osservatore Romano, handout)

VATICAN CITY (CNS) — Anti-Semitism is absolutely contrary to Christianity, and the church has a duty to denounce and repel such hatred, Pope Francis said.

There are no words, however, that could ever adequately address “the horrors of cruelty and sin” of the Holocaust, he added. There is only prayer “that God may have mercy and that such tragedies may never happen again.”

The pope made his comments Feb. 9 at the Vatican during an audience with a delegation of the Anti-Defamation League, an organization that fights anti-Semitism.

“Sadly, anti-Semitism, which I again denounce in all its forms as completely contrary to Christian principles and every vision worthy of the human person, is still widespread today,” the pope said.

He reaffirmed that the Catholic Church “feels particularly obliged to do all that is possible with our Jewish friends to repel anti-Semitic tendencies.”

More than ever, the fight against anti-Semitism needs effective tools of education and formation that teach respect for everyone and protection for the weakest.

“Caring for the sacred gift of all human life and safeguarding its dignity, from conception to death, is the best way of preventing every type of violence,” he said.

“Faced with too much violence spreading throughout the world, we are called to a greater nonviolence, which does not mean passivity, but active promotion of the good,” he said. “Indeed, if it is necessary to pull out the weeds of evil, it is even more vital to sow the seeds of goodness.”

Pope Francis encouraged the delegates to continue their work, knowing that “the best remedies against the rise of hatred consist in making available the means necessary for a dignified life, in promoting culture and favoring religious freedom everywhere, as well as in protecting believers and religions from every form of violence and exploitation.”

NEXT: World needs women, not for what they do, but who they are, pope says