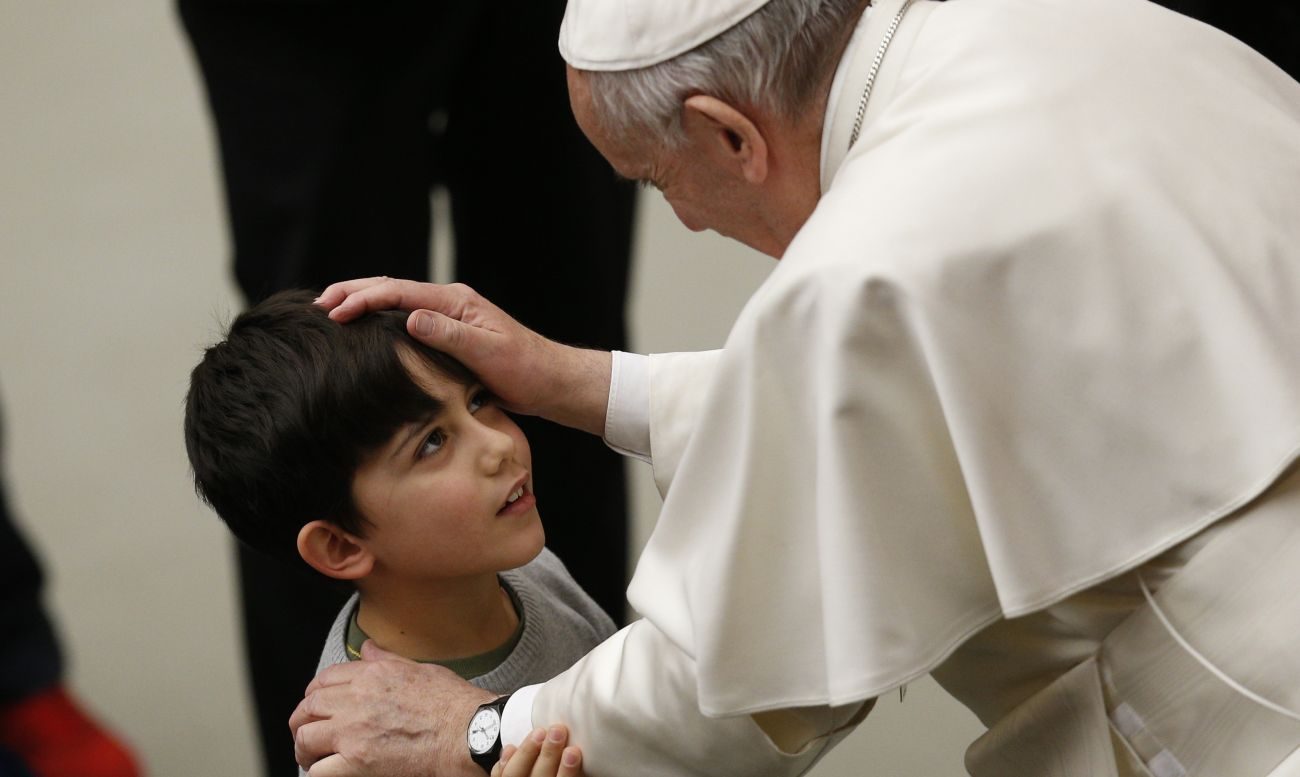 Pope Francis blesses a boy while meeting the disabled during his general audience in Paul VI hall at the Vatican in this Feb. 8, 2017, file photo. Discernment is needed to understand life's ambiguities, not rigid thinking that tends to silence the Holy Spirit, Pope Francis said.(CNS photo/Paul Haring)

True discernment can only be achieved by interpreting the signs of the times and listening to the sufferings of others, especially the poor, the pope told editors and staff of an Italian Jesuit journal.

“Rigid thinking is not divine because Jesus assumed our flesh, which is not rigid except at the time of death,” he said.

The pope met Feb. 9 with the editors and staff of La Civilta Cattolica, a Jesuit-run magazine founded by Pope Pius IX in 1850. The Rome-based biweekly continues to be reviewed by the Vatican Secretariat of State before publication.

Commemorating the journal’s 4,000th issue, the pope said it was “a truly unique milestone.” He also encouraged the editors and staff to continue their journey and “to remain in the open sea.”

“A Catholic should not be afraid of the open sea nor look for shelter in safe havens. Above all, you, as Jesuits, must avoid clinging to certainties and securities. The Lord calls us to go out in mission, to go far off and not retire to safeguard our certainties,” he said.

As the journal launches versions in English, Spanish, French and Korean, the pope said, Civilta Cattolica can continue its mission of being a Catholic magazine that doesn’t “simply defend Catholic ideas,” but “transmits and give witness” to Christ.

Editors, journalists and staff, he continued, must be guided by the prophetic spirit of the Gospel, especially in a world that is complex and full of challenges.

In particular, there is a “‘shipwreck culture’ that seems to triumph — nourished by profane messianism, relativistic mediocrity, suspicion and rigidity — as well as a ‘dumpster culture’ where everything that doesn’t work as it should or is considered useless is thrown away,” the pope said.

He also encouraged the journal’s staff to use the magazine to help men and women understand that today’s world “is not a black and white canvas. It is a colorful canvas.”

“This is the area of discernment, the space in which the Spirit stirs the heavens like air and the sea like the water,” he said. “Your task — as Blessed Paul VI asked of you — is that of ‘living the confrontation between man’s deepest desire and the perennial message of the Gospel.'”