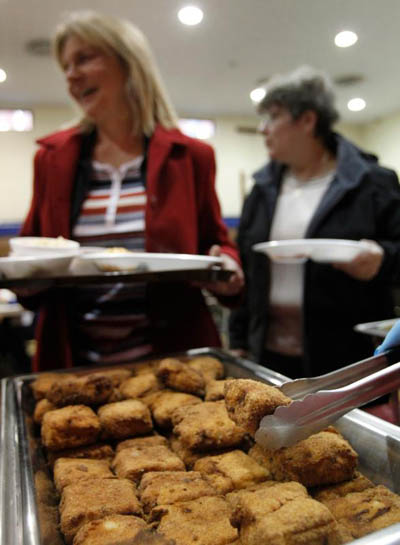 Haddock is served during a fish fry in the parish hall of St. Mary’s Church in Altoona, Pa., Feb. 16, 2013. The parish Lenten Friday fish fry is an opportunity for Catholics to see themselves as part of a larger family of faith. (CNS photo/Bob Roller)

Few things are constant in our home except the nightly debate over dinner. If one kid likes spaghetti and meatballs, then two don’t. Eggs? Yuck, says the middle one. Tacos, lasagna, rice, beans, baked carrots — even pie — there’s always at least one dissenter in the crowd.

No one is starving at our house. But we do tend to obsess over what we eat. Given that, you’d think that Fridays during Lent would be a meal minefield with our house of five abstaining from meat.

Truth be told, those Fridays are the only time of year when there’s no fight about dinner. It’s always understood — cheese pizza.

It’s almost a relief to not have to make a decision. We know what we’re having, but more important, our kids know why.

Traditionally, Catholics aged 14 and over are required to abstain from meat on Fridays during Lent (and to fast on Ash Wednesday and Good Friday), but as long as our kids have been at the dinner table, they’ve gone meat-free with us. OK, they might not know exactly why we’re skipping the pepperoni, but they know it has something to do with church and Lent.

I’ll admit, meat-free Fridays during Lent is an easy sell in the kid world. After all, cheese pizza tastes pretty good. But I think there are some deeper lessons to consider.

For starters, it shows we are making a sacrifice. Granted, it’s not like dying on the cross for the salvation of all — thank you, Lord — but it does show a willingness to go without as a sign of obedience and respect.

Most of the time, we don’t think of a hamburger as a token of love, but if that’s our favorite food and we make a point not to savor its juicy goodness on a Friday during Lent, that means something. If you’ve ever witnessed the magnetic power of a chicken nugget in the presence of a toddler, you understand what I mean.

Like many families, we are on the go most days of the week. We don’t eat at the same time and, of course, not everybody likes what we are having.

That makes our Friday night cheese pizza dates even more meaningful. They are an opportunity for the five of us to be together and catch up on what we’ve missed between soccer games, band practice and Girl Scouts meetings.

I think it also helps knowing that we aren’t the only ones following crazy rules about what we have to eat and when.

By now, my 8-year-old knows the drill about no meat on Fridays during Lent. He sees the signs for the weekly fish fry at our church and even though he and his sisters don’t like fish, they beg us to go. (For the French fries, naturally.)

So, we take a break from our cheese pizza party at least once to join the fried food fun with the rest of our parish.

If we are trying to raise children who see themselves as part of a larger family of faith, it helps to put them in situations where they can see it in context. Two cheese pizzas at home on a Friday night is not the same thing as a church hall full of people who believe the same way we do. It helps to celebrate our faith and share it with others joyfully.

Lent is supposed to be a time of prayerful reflection and repentance. But there can be happiness and laughter in that time as well. We can use our Lenten abstentions as a way to teach our children about sacrifice, community and tradition.

All it takes is a cheese pizza.

PREVIOUS: Going on a fast for atonement and preparation

NEXT: Fasting: It’s about more than food