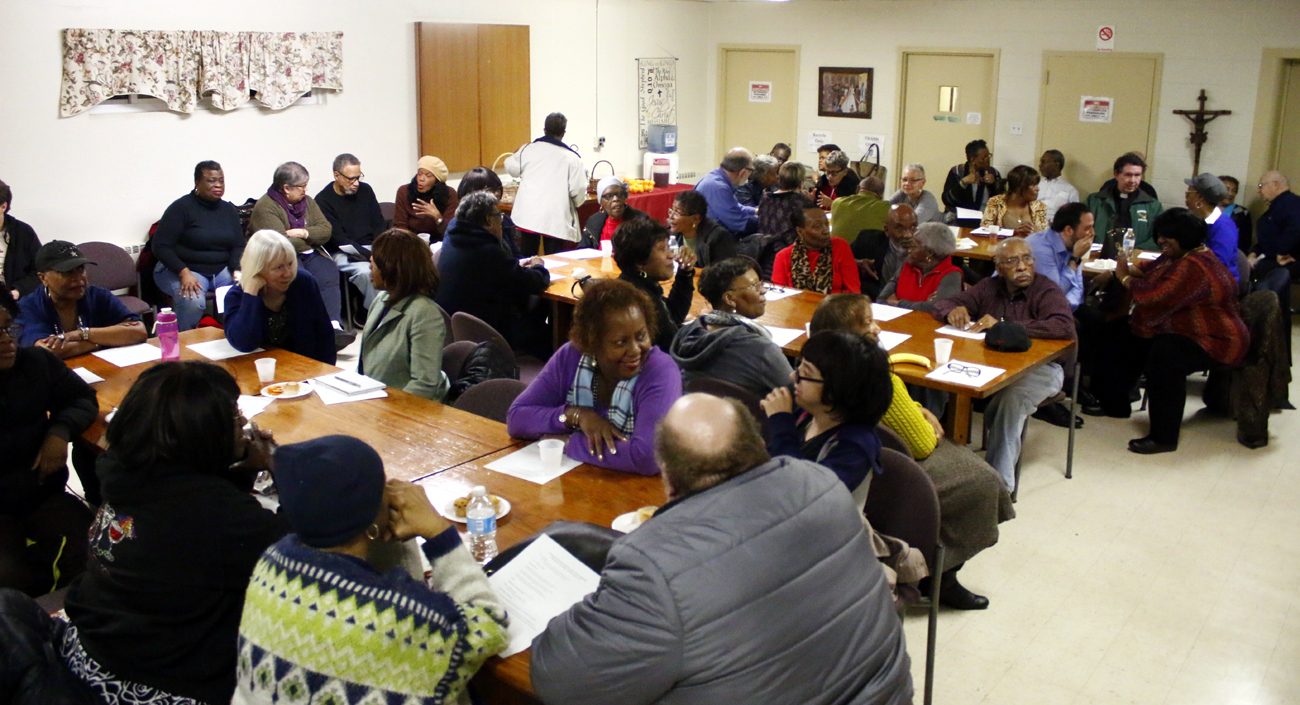 Participants take part in the “Conversation on Race in Our Country” Feb. 28 at St. Raymond Parish, Philadelphia (Sarah Webb) 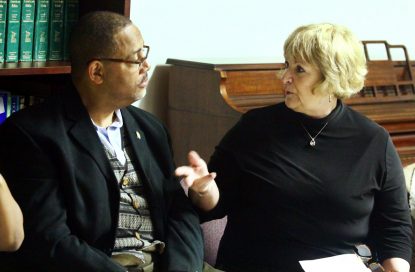 Those of different racial and ethnic backgrounds in the Philadelphia Archdiocese came together for a two-hour session, “Conversation on Race in Our Country,” Feb. 28 at St. Raymond of Penafort Parish in Northwest Philadelphia.

It was the first of three sessions in the “Growing in Racial Harmony within the Catholic Church: Continuing the Conversation” series.

Along with parishioners from several parishes in the archdiocese, some priests also were present.

Among the sensitive topics raised at the Tuesday evening session was knowing the difference between being color brave vs. color blind, analyzing the makeup of one’s social circles and admitting to the biases one may carry consciously or unconsciously.

“I think it is so important to have meetings like this,” said Eileen Dresh, who is white and commutes from Northeast Philadelphia to attend the predominantly African American St. Raymond Parish. “I think it’s important that we listen and hear the other side. We need to understand what black people experience in their lives. As we hear the different things we become aware of what is really there.” 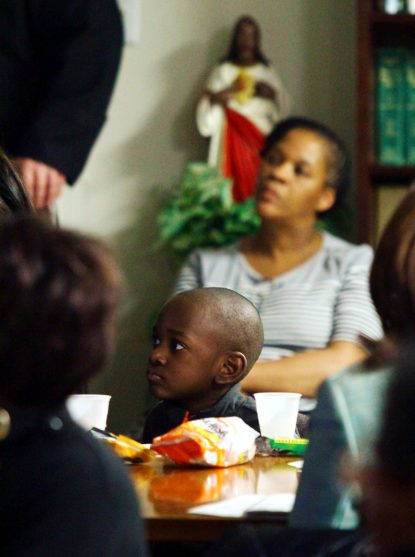 Christaen Corbin, who attended with his grandmother, was the youngest in attendance. (Sarah Webb)

The program opened with prayers and the singing of “Amazing Grace.” After a reading of Scripture from Acts 17:26-29, there were prayers of intercession. After everyone prayed the Lord’s Prayer, the participants broke up into small groups that included at least one person who was not African American.

The first question was, when did one first become aware of racial differences and prejudices? Of those present, African Americans said they became aware of this at a much younger age than whites.

Then all were invited to watch the video, “Color Brave or Color Blind,” a speech by executive Melody Hopson. She shared her experience of attending her first meeting serving on a major board of directors and the hotel staff mistook her for the domestic staff by asking her, “Did you bring your uniform?”

“I think this was very good,” said Gail Blain, an African American parishioner from St. Raymond’s. “I enjoyed hearing Melody Hopson because there was so much truth in what she was saying. There is still more work to be done.”

Among the attendees who shared their personal experiences during the segment was Cynthia Brown, who is a vice president for a local corporation and a trustee at Our Lady of Hope Parish in the Logan section of North Philadelphia.

Brown said she often works from her Chester County home. She shared an anecdote of how missionaries once came to her door and assumed she was the maid. “I told them that this was my home and that some of us do live in Malvern,” she said.

During one of the PowerPoint presentations Deacon Bradley showed the image of an iceberg noting that most of it lies below the surface. This portion of the program asked those present to analyze what prejudice was, the concept of us vs. them and who they considered in their “in group” and “out group.”

Then all were asked how can one be bold on the issues of race within parishes and communities? During the last segment Davis sharing the FIG analogy. This was an acronym for fears, ignorance and guilt. The small groups were challenged to answer the question, “We shall overcome, but how?”

The Feb. 28 session at St. Raymond’s was a continuation of the “A Dream in Black and White: Growing Understanding as Catholics” prayer service that was held recently on Martin Luther King Day.

That inaugural event drew a standing-room-only crowd to St. Philip Neri Church in Lafayette Hill on Jan. 16. It was the 34th annual archdiocesan gathering to honor the memory of Rev. Dr. Martin Luther King Jr. and the first time the event was held in a predominantly white Catholic suburban congregation.

The next session will focus on diversity in the pews, including ethnicity and social class, according to Father Walsh. The theme is “Racism and Prejudice Within our Parishes,” and it will be held at St. Athanasius Church’s school hall, 7105 Limekiln Pike in the West Oak Lane section of Northwest Philadelphia on Monday, March 13 at 7 p.m.

The final session will be held at St. Barbara Church, 5351 Lebanon Ave. in Southwest Philadelphia on Monday, April 10 at 7 p.m. The theme will be “Racism and Prejudice within the Diocese and Universal Church.” 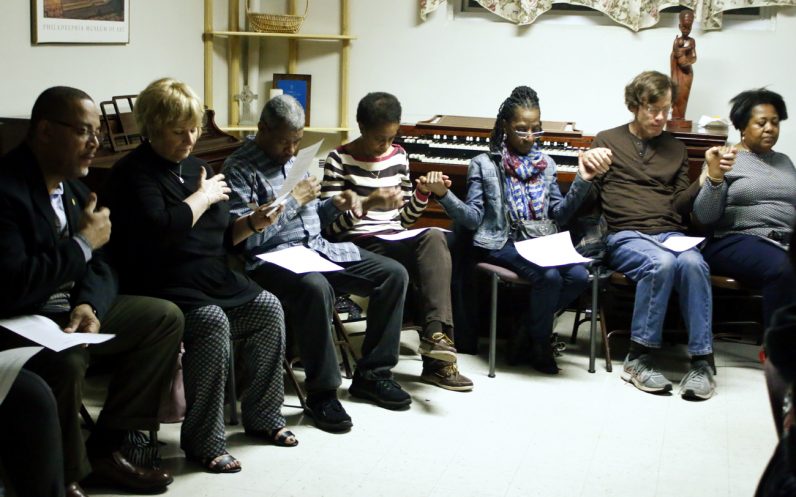 Catholics from several archdiocesan parishes pray together during a discussion on race Feb. 28 at St. Raymond Parish, Philadelphia. (Sarah Webb)