Helping Hands at St. Monica’s get to work feeding the world 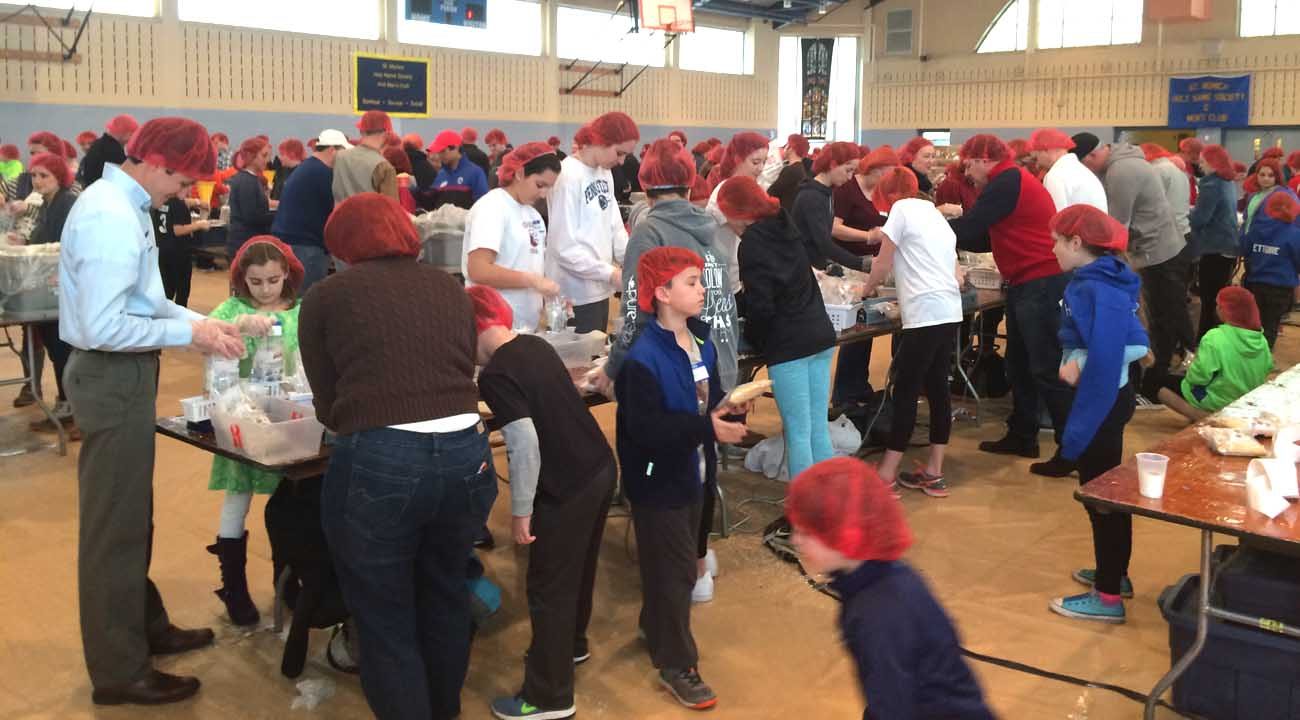 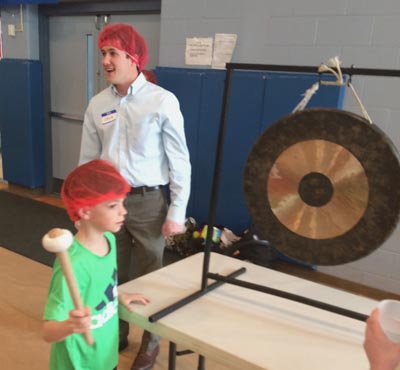 Jett Williamson rings a gong in the St. Monica Parish gym to signal that an additional 5,000 meals had been packaged. Looking on is Levi Keene of Catholic Young Adults of Chester County (CYACC).

While the season of Lent can be thought of as a time to make sacrifices and abstain from certain pleasures in our lives, it is also a time to perform charitable deeds that can help those less fortunate.

Local Catholics recently had an opportunity to do so by joining the Catholic Young Adults of Chester County (CYACC) in a Catholic Relief Services (CRS) Helping Hands event on Sunday, March 12 at St. Monica Parish in Berwyn.

One of CRS’ most important roles is to provide food immediately for needy people around the world as well as anti-poverty solutions for the future. Toward that goal, the volunteers at St. Monica’s filled bags with approximately 390 ounces of rice and the bags filled 237 boxes that would provide 50,000 meals.

The packaged meals went to 27 community-based social service centers supported by CRS in Burkina Faso in Western Africa. Each bag is enough to feed six people.

This marked the third year that the CYACC held the CRS Helping Hands event at St. Monica’s. Father Charles Zlock, pastor, believes that in addition to helping people in need, the event may have an impact on St. Monica’s future as it draws people young and old more deeply into the life of the church. The volunteers were making a difference not only in their local community but throughout the world.

“We need to have an impact on the parish, neighborhood, archdiocese and the world,” said Father Zlock.

Held in the parish gymnasium, people of all ages were invited to participate. More than two dozen tables had been set up where people would work in groups of five or six. Father Zlock welcomed everyone with a prayer. Joanne Kratz of CRS thanked all who came out to serve and talked about those who would ultimately benefit.

She explained how CRS, the official overseas relief and development organization of the United States Conference of Catholic Bishops, was established just after World War II to address the millions of people displaced by it.

“The U.S. bishops helped us answer a refugee crisis in Europe,” Kratz said. “CRS is here to help. We find out what people in other countries need and how we can help. We want to boost that economy. The food that is made today will be sent to orphanages, hospitals, nursing homes and to people who can become self-sufficient.”

Latoya Gillyard of the organization Rise Against Hunger also helped everyone realize the significance of the job they were about to perform.

“Giving back is something that God wants from us,” said Gillyard. “This may be the one meal that a person gets to eat in a day.”

The tables were soon buzzing with action as people filled bag after bag to be sealed, boxed and sent off to Burkina Faso. Various parish organizations participated including the CYO sports programs.

As CYACC’s service chairman, it is Levi Keene’s job to coordinate service projects for the group.

“This was a great way to get St. Monica’s involved,” said Keene. “Our goal was to package 10,000 meals and we have tripled that.”

The project continues to draw more interest each year from members of St. Monica’s as well as people in the surrounding area. The first year, about 150 came out and helped package meals. That grew to 230 in 2016. This time, a total of 280 volunteered their time.

“There are about 50 more people in attendance,” said Gillyard. “Somebody is inspired to continue to give back in their everyday life.”

For those new to the area, this can be a wonderful way to not only serve others around the world but get to know more people in the surrounding communities. Jason Carter, director of Family and Youth Ministry at St. Monica’s, moved to the area from Florida two years ago and this is the first time he participated in this project along with his wife and five children.

“We get the community together and that helps people to get a more global view of how we’re all brothers and sisters in Christ,” said Carter. “Everyone is drawn to service.”

Mary Carter, a fourth grader at Queen of Angels Regional Catholic School and a parishioner of St. Monica’s, enjoyed the upbeat atmosphere and hopes people in need will benefit from the work of the volunteers who came out to lend a helping hand.

While there was plenty of noise in the gym from lively conversations as well as background music, it was occasionally interrupted by the sound of a gong being rung. This was done to indicate that another 5,000 meals had been packaged.

Those in attendance were also given boxes that can be filled with money at home in support of the annual CRS Rice Bowl collection. While 75 percent of the contributions received go to Catholic Relief Services’ programs in other parts of the world, the other 25 percent stays within the Philadelphia Archdiocese to help prevent hunger and poverty locally.

NEXT: Sisters of St. Joseph open Welcome Center for new arrivals in Olney