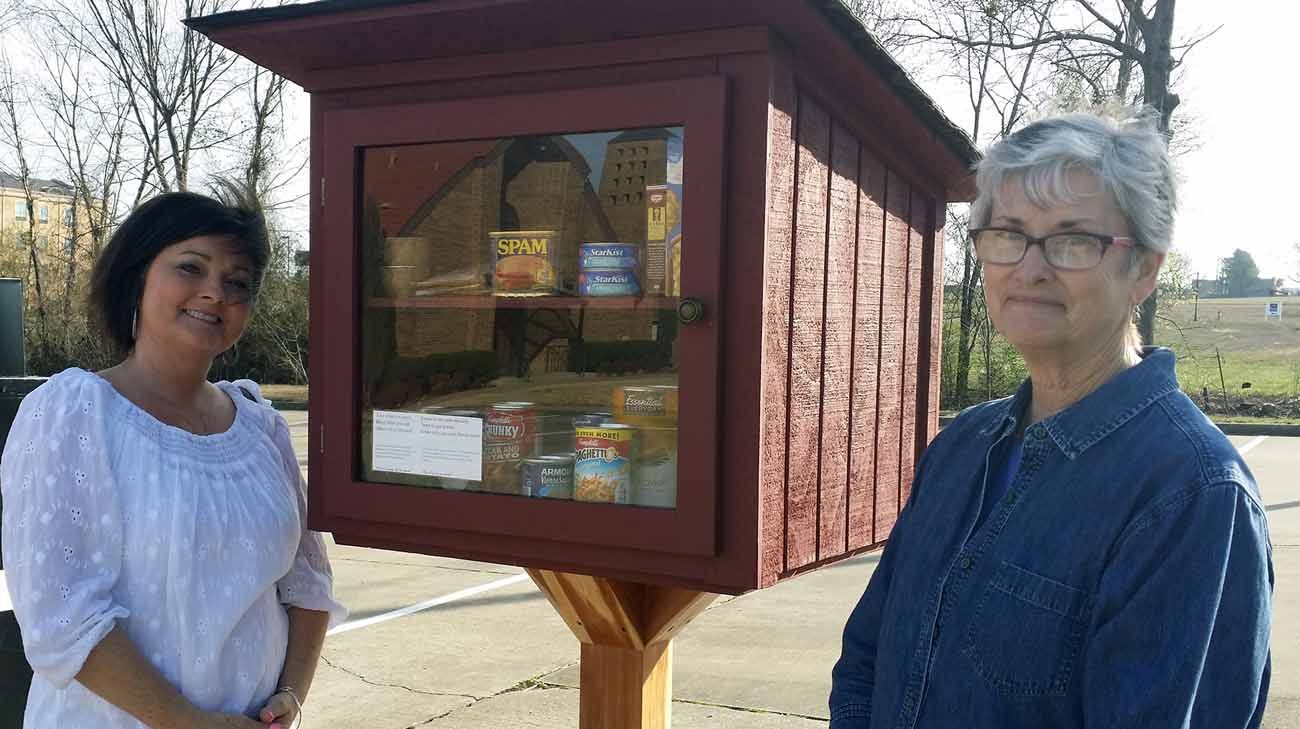 VAN BUREN, Ark. (CNS) — A marquee with a large yellow arrow sits on the lawn of St. Michael Church.

Since January, two blessing boxes flank the sign, one filled with food, the other with hygiene and first aid items. The boxes also are a symbol that St. Michael is a community that lives out Jesus’ message.

“Heritage United Methodist Church operates a big food pantry right across the street,” parishioner Annie Woody, who began the blessing box project, said, “but it’s only open one day a month. When I saw a story about blessing boxes on TV, I saw this as a small way our church could help the hungry on a daily basis.”

The 600-family parish hasn’t operated a food pantry but saw the unmanned “pantry” as a good alternative.

“Sometimes we need to listen and be open to the call of the Gospel,” Father Rick Hobbs, St. Michael’s pastor, told the Arkansas Catholic, newspaper of the Diocese of Little Rock. “The blessing box helps us do that because we don’t have the resources of some of the larger parishes, but in a smaller way we’re able to be an example to the community and our people, especially our youth.”

The blessing boxes are based on the Little Free Pantry project started by Jessica McClard at Good Shepherd Lutheran Church in Fayetteville in May 2016. Providing free food, drinks and personal care items is similar to the Little Free Library concept that now dots the country. Anyone can take whatever items they need any time of the day or night, but visitors are also able to leave items if they wish.

Since the first St. Michael blessing box, built by Leonard Blaschke, was installed in January, the project has grown. Encounters with people using the box alerted parishioners to other ways they could help.

“Volunteers put out a few things at a time and restock several times a day,” Woody said. “We don’t want one person to empty the box, leaving nothing for the next person. Sometimes parishioners put something in the box and see it disappear within an hour.”

Woody has a team of parishioners helping with the project, including Betty Rose Neumeier, Emily Dickinson and Veronica Lane.

One day a homeless man came to the church office and reported that the blessing box was empty. Woody gathered some food items into a plastic bag — Vienna sausages, cereal, applesauce, power bars and a plastic spoon.

The encounter inspired Woody and Dickinson to make brown bags for people who came for an immediate meal.

“Emily (Dickinson) thought we should put Bible verses on the bags,” Woody said, “and this led me to gather some freebie booklets and holy cards left at the church library and add them to the blessing box. It gives people something good to read, food for their souls.”

Woody adds a personal touch to the hygiene box by making and bagging homemade laundry detergent made with Borax, washing soda and shaved bar soap.

“Annie’s goal and vision has helped our youth get involved in helping,” Father Hobbs said. “Different PRE (Parish Religious Education) classes bring food each week and walk down with their teachers to put their donations into the blessing box.”

The program is growing in the hearts of parishioners as well.

“There’s an old saying I like to talk about,” Father Hobbs said. “‘Inch by inch it’s a cinch, but by the yard it’s too hard.’ It’s important to listen to God. When we step back and listen, God will direct our hearts. We’re called to serve others, no matter who they are.”

Blessing boxes, known also as Little Free Pantry, are starting to pop up around the country in people’s front yards or churches. To learn more visit littlefreepantry.org. The boxes can be stocked with canned goods, drinks, personal care items and even school supplies.

Meyerriecks is a correspondent for the Arkansas Catholic, newspaper of the Diocese of Little Rock.

NEXT: In Arkansas, eight executions set for April; bill filed to end practice