As in his life, all welcomed at Cardinal Keeler’s funeral Mass 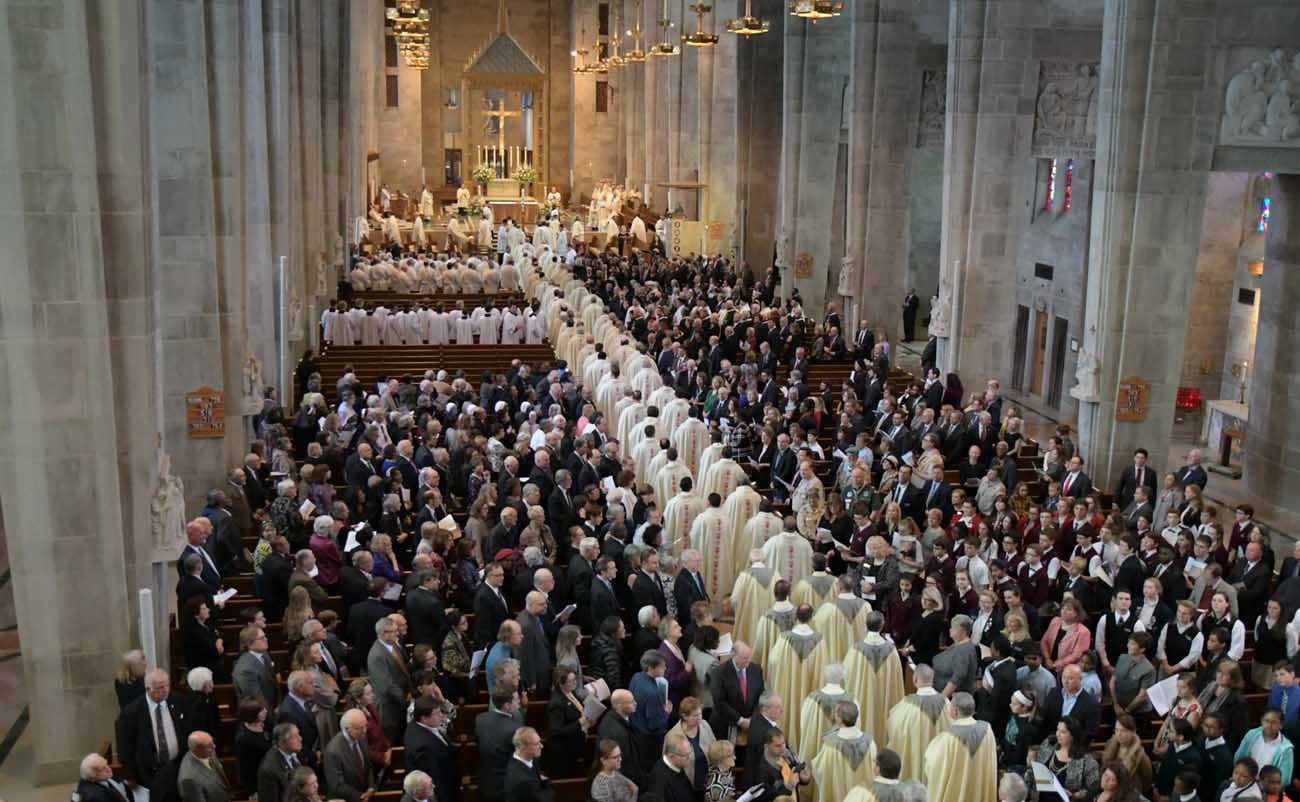 BALTIMORE (CNS) — Mourners from near and far, and all walks of life and various creeds, filled the Cathedral of Mary Our Queen in Homeland March 28 for the funeral Mass of Cardinal William H. Keeler, 14th archbishop of Baltimore.

Thirty prelates, including six cardinals, and dozens of priests and deacons mourned Cardinal Keeler, who died March 23 at 86, and commended his soul to God.

While he was a churchman of the highest stature, to be sure many came to Cardinal Keeler’s funeral to remember a man who had simply never forgotten them.

“He always remembered who I was and what church I came from,” said Jo Anne Harris, mother of Father Raymond Harris, who was ordained by Cardinal Keeler and now is pastor of Holy Family Parish in Randallstown. “You would always get a smile and a handshake, and you knew it wasn’t phony. It was from the heart.” 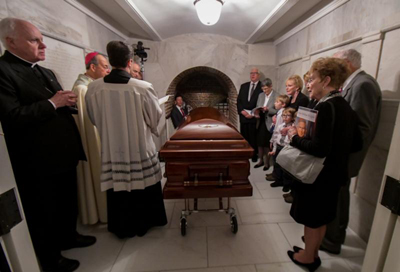 Baltimore Archbishop William E. Lori gives the final blessing over the casket of Cardinal William H. Keeler, retired archbishop of Baltimore, March 28 in the crypt of the Basilica of the Shrine of the Assumption of the Blessed Virgin Mary in Baltimore. (CNS photo/Kevin J. Parks, Catholic Review)

Sheila Peter, a cathedral parishioner, remembered bringing her son, Tommy, then 10, to see Cardinal Keeler in the sacristy after a Good Friday veneration of the cross.

“I said, ‘Here’s a big fan of yours,’ and the cardinal held his (zucchetto) over Tommy’s head and we took a picture,” she told the Catholic Review, Baltimore’s archdiocesan news outlet.

In his homily, Cardinal Timothy M. Dolan of New York described the “indefatigable, friendly, ever-unflappable gentleman of faith, William Cardinal Keeler,” who took to heart a bit of advice to priests from St. John Paul II:

“Love for Jesus and his church must be the passion of your life.”

“He not only knew the quote, he lived it and radiated it,” Cardinal Dolan said.

He and others acknowledged that Cardinal Keeler’s passion overflowed, particularly in the ecumenical and interreligious arena.

When he stepped down as moderator for Jewish affairs for the U.S. Conference of Catholic Bishops, a position that included co-chairing key dialogue between the two faiths, Cardinal Keeler asked Cardinal Dolan to take over, the latter recalled.

“I had rehearsed my ‘No,’ having just arrived in New York and obviously preoccupied, but he described the dialogue with such zeal and excitement, it sounded like he was inviting me to a game at Camden Yards, with all the cold beer and hotdogs, kosher, I could eat,” Cardinal Dolan said.

Cardinal Keeler’s “zeal and excitement” for working with the Jewish community was reciprocated.

Before the funeral Mass, Rabbi Abie I. Ingber, executive director of the Center for Interfaith Community Engagement at Xavier University in Cincinnati, reflected on what the cardinal had meant to him.

“We could start with the word ‘everything,'” Rabbi Ingber said, recalling how Cardinal Keeler had introduced him to St. John Paul II in 1999, a meeting that “directed” the next 18 years of his life, inspiring him to help build an exhibit on the saint and the Jewish people, “A Blessing to One Another.”

Over the years, Rabbi Ingber and Cardinal Keeler continued their correspondence and visits, and the rabbi visited the cardinal, when his health was failing, at St. Martin’s Home for the Aged.

“I asked for his blessing and I gave him mine,” Rabbi Ingber said.

As he looked around the cathedral, he noted that his grandparents had been murdered in the Holocaust.

“Here I am, the grandchild of Jews who were killed at the Holocaust, lovingly seated at the funeral of a cardinal of the Catholic Church,” he said. “That’s a good world.”

The liturgy included a message from Pope Francis, read by Archbishop Christophe Pierre, apostolic nuncio to the U.S., in which the pope expressed his condolences for the loss of the “wise and gentle pastor.”

The readings and Gospel held special meaning for the cardinal, who chose them himself.

The Gospel described Jesus’ call to his first apostles, Peter, Andrew, James and John, who left their work as fishermen to follow him.

At the conclusion of Mass, Archbishop Lori, the main celebrant, thanked members of the cardinal’s family “for sharing Cardinal Keeler with us all these many years, and sharing him so generously.”

He also thanked the Little Sisters of the Poor, who operate St. Martin’s Home, “for welcoming him into your home as you would welcome Christ.” The sisters received a standing ovation.

The archbishop also reflected on the last four or five years of Cardinal Keeler’s life, drawing a parallel between it and the “grand silence,” a former seminary tradition that called for silence from 9 p.m. every evening until Mass was celebrated the following day.

It was not the most popular rule, the archbishop remembered, “and rumor has it there were many infractions — I wouldn’t know about that.”

Nevertheless, Archbishop Lori said, the grand silence was valuable as a time of prayer and rest which “taught the important lesson of preparing one’s mind and heart for the next day and the important responsibilities each new day brings.”

Cardinal Edwin F. O’Brien, grand master of the Equestrian Order of the Holy Sepulchre of Jerusalem and former archbishop of Baltimore, offered the final commendation, and Cardinal Keeler’s eight pallbearers carried his remains out of the cathedral, where deacons, priests, bishops and cardinals chanted “Salve Regina.”

A funeral procession took his remains to their final resting place, the Basilica of the National Shrine of the Assumption in Baltimore.

Zygmont is on the staff of the Catholic Review, the news outlet of the Archdiocese of Baltimore.