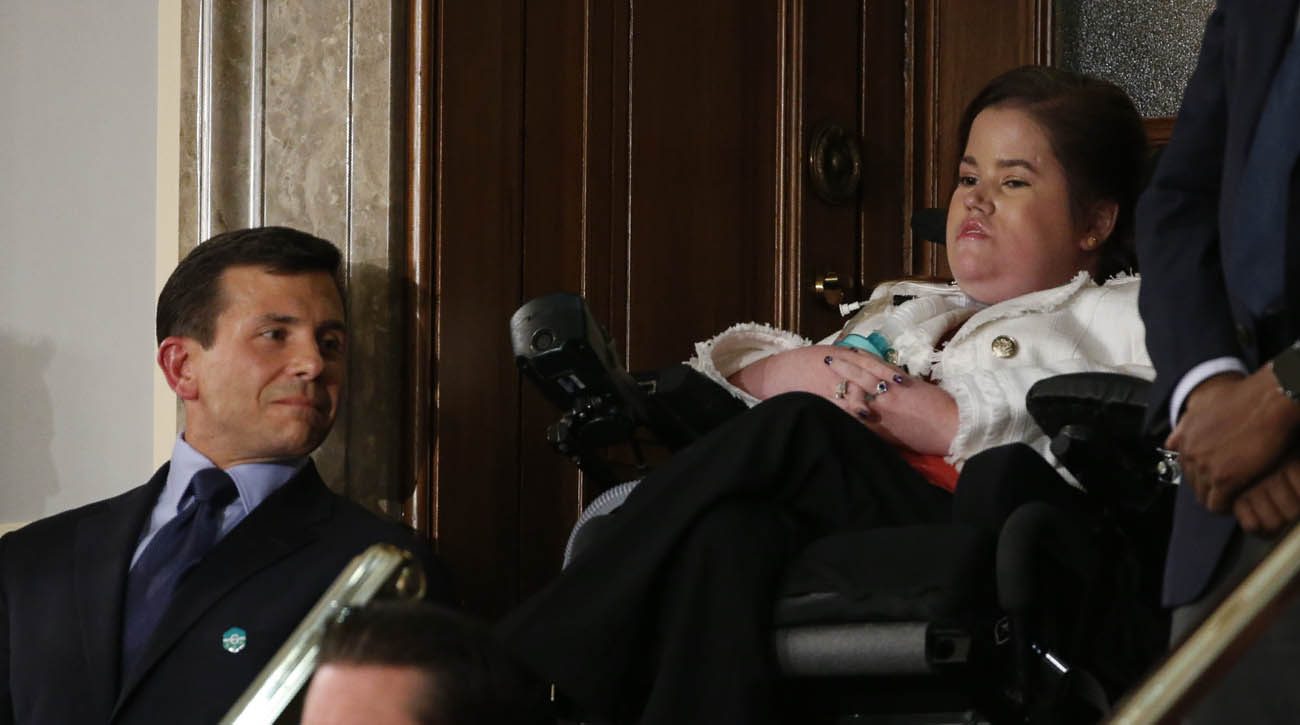 Megan Crowley listens as U.S. President Donald Trump addresses a joint session of Congress Feb. 28 in Washington. Crowley, a 20-year-old sophomore at the University of Notre Dame who was diagnosed with Pompe disease when she was 15-months-old, was recognized by Trump during his address. (CNS photo/Jonathan Ernst, Reuters)

WASHINGTON (CNS) — Megan Crowley, a University of Notre Dame student born with a rare disease, was recognized by President Donald Trump during his address to a joint session of Congress.

The president Feb. 28 acknowledged Megan Crowley, 20, who has Pompe disease, for her strength and character while living with the inherited disorder since being diagnosed at 15 months of age.

Trump pointed to Megan Crowley, who was seated in a wheelchair in the House of Representatives gallery and received two standing ovations, on Rare Disease Day. Traditionally marked on the last day of February, the day first was designated in 2008 by the European Organization for Rare Diseases.

Megan Crowley was not expected to live past 5, Trump said, but her father, John Crowley, founded a pharmaceutical company to develop the enzyme replacement treatment she needs to cope with symptoms of the disease.

“Megan’s story is about the unbounded power of a father’s love for a daughter,” Trump said.

Megan Crowley’s father wrote about the family experience in Congress and the White House on Facebook Feb. 28.

“I cannot tell you what it means as parents for me and Aileen to watch as the president of the United States and all of our nation’s leaders give your daughter two standing ovations for her strength, courage and character. I felt that my heart was literally bursting with pride. Just the most amazing young lady. And now the world knows our Megan. … I knew someday it would,” his post said.

The president cited the family’s situation as a reason to improve the “slow and burdensome approval process” at the Food and Drug Administration that he said has kept advances in treatments from reaching people in need.

“If we slash the restrains, not just at the FDA, but across our government, then we will be blessed with far more miracles like Megan,” Trump said.

Pompe disease is a rare and inherited disorder, occurring in 1 of about every 40,000 births. Someone with the disease experiences progressive weakness in skeletal muscles and the heart and hampered breathing, and usually dies at a young age. The disease prevents the body from producing an enzyme that breaks down stored sugar, called glycogen, into glucose for use by the body. As a result, excessive amounts of glycogen accumulate in body tissues, leading to major damage.

John Crowley founded Novazyme Pharmaceuticals in 1999 to develop protein engineering technologies to treat diseases such as Pompe. Genzyme Corp. acquired the company in 2001 and Novazyme eventually developed the enzyme replacement therapy the young Crowleys continue to use.

Today, John Crowley is CEO of Amicus Therapeutics, a Cranbury, New Jersey, biotechnology firm with more than 250 employees. The company specializes in therapies for rare and orphan diseases.

A 2010 drama, “Extraordinary Measures,” centers on the efforts of the Crowleys to find a researcher who might develop a cure for their two children’s rare genetic disorder.

Megan Crowley has a blog, High Heeled Wheels, where she writes about life and her experiences living with the disease. She also serves as president of Notre Dame’s Make-A-Wish Foundation chapter.