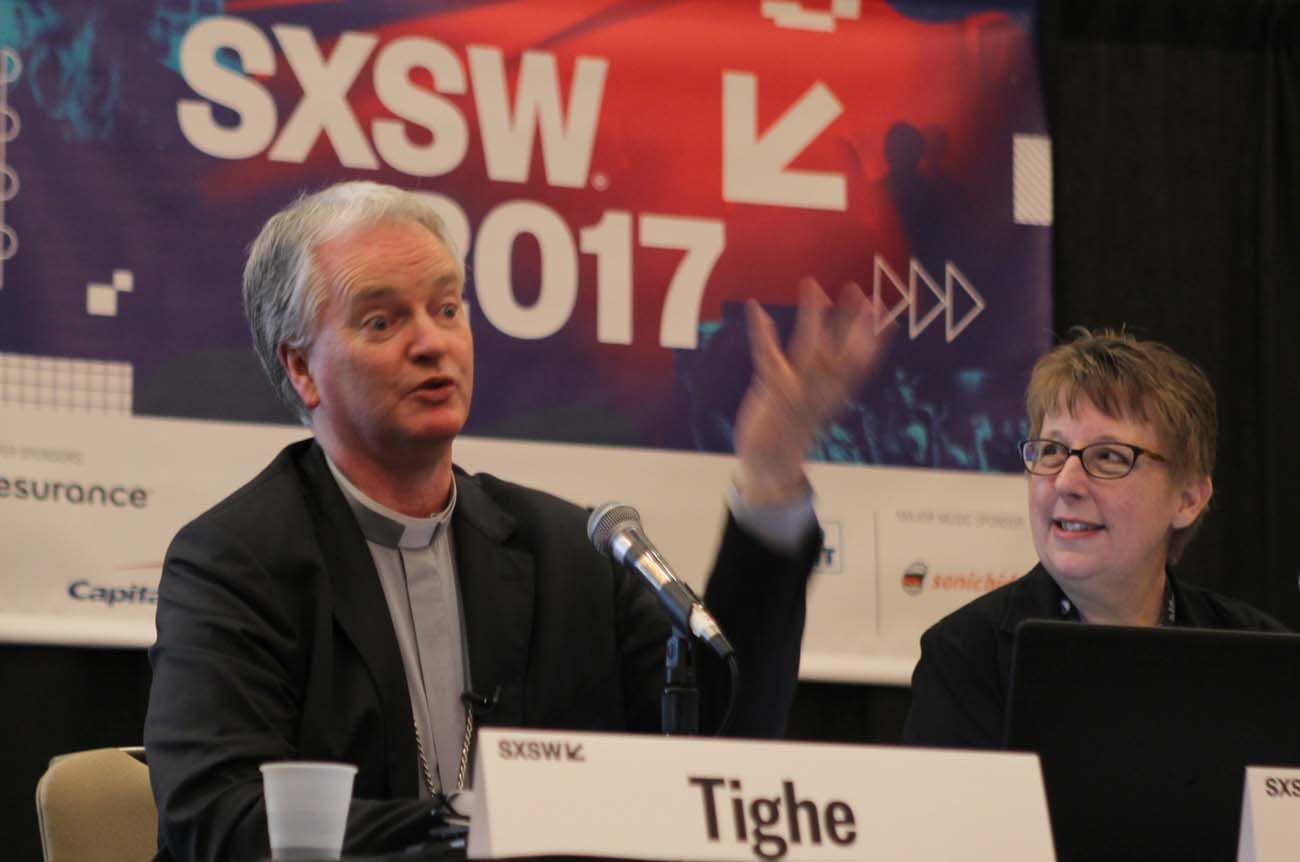 In terms of recognizable organization names, the Catholic Church has to rank near the top. But, does it view itself as a brand to be marketed?

That was among several questions raised by attendees during a March 12 panel titled “Compassionate Disruption” at the annual South by Southwest Festival in Austin. The panel was one of the festival’s first steps to address faith’s place in secular discussions. Bishop Paul Tighe, adjunct secretary for Pontifical Council for Culture, was on the panel with Catholic communicators Helen Osman, Michael Hertl and Christoph Krachten at the Hyatt Regency.

The concept of branding has become more prevalent than ever, thanks to the digital age. All around the festival, commonly known as SXSW, companies marketed their brands via experiential booths and events.

Activist groups trying to attract young people to affect social change also were present. Faith-specific booths appeared few and far between at the Austin Convention Center, but that could be changing, thanks to the “Compassionate Disruption” panel. The festival runs through March 19.

Bishop Tighe told the large crowd inside a Hyatt Regency ballroom that the Vatican would not likely play a centralized role in defining a Catholic brand online. The church’s real strength, he said, comes from the local level.

“I think we have to be very careful about not trying to be overly uniform,” he continued. “But, I do think there’s value, at the same time, in saying, ‘Let’s define standards and language that would work together.'”

Bishop Tighe helped lead a digital revolution at the Vatican during his eight-year tenure as secretary of the Pontifical Council for Social Communication, which ended in 2015.

He jokingly acknowledged that the Catholic Church is an unconventional place to turn to when it comes to communication.

Referring to how the results of papal elections are revealed, he said, “Here we are talking about, we’re talking about social media, digital media and new technologies, in the Vatican and in the church, our biggest communications moment is delivered by smoke.”

Hertl and Krachten, who work in digital media for the church in Germany, stressed that quality content, on YouTube and social media channels, is a must for Catholic communicators.

“I think we have to connect with the young generation where they are,” Krachten said.

Bishop Tighe told attendees that social media is marred when there is acrimonious discussion. Catholics, he insisted, must be good citizens there and avoid giving in to trolls, a term for social media users who aim to solely deride people online.

He added that Catholics, and the Vatican, must keep a mission in mind.

“One of the things we were very clear about from the beginning was that that we’re not going into social media as a brand trying to measure performance,” he said. “We’re ultimately in social media as an agency that is speaking of something other than ourselves, which is trying to share the good news of the Gospel.”

That’s not to say that the church can’t learn lessons from social media analytics.

“We need to be professional in what we do,” he told the crowd, before adding that key performance indicator data shouldn’t “block what God is trying to do.”

NEXT: Online advertisers market more directly to kids than TV ever could