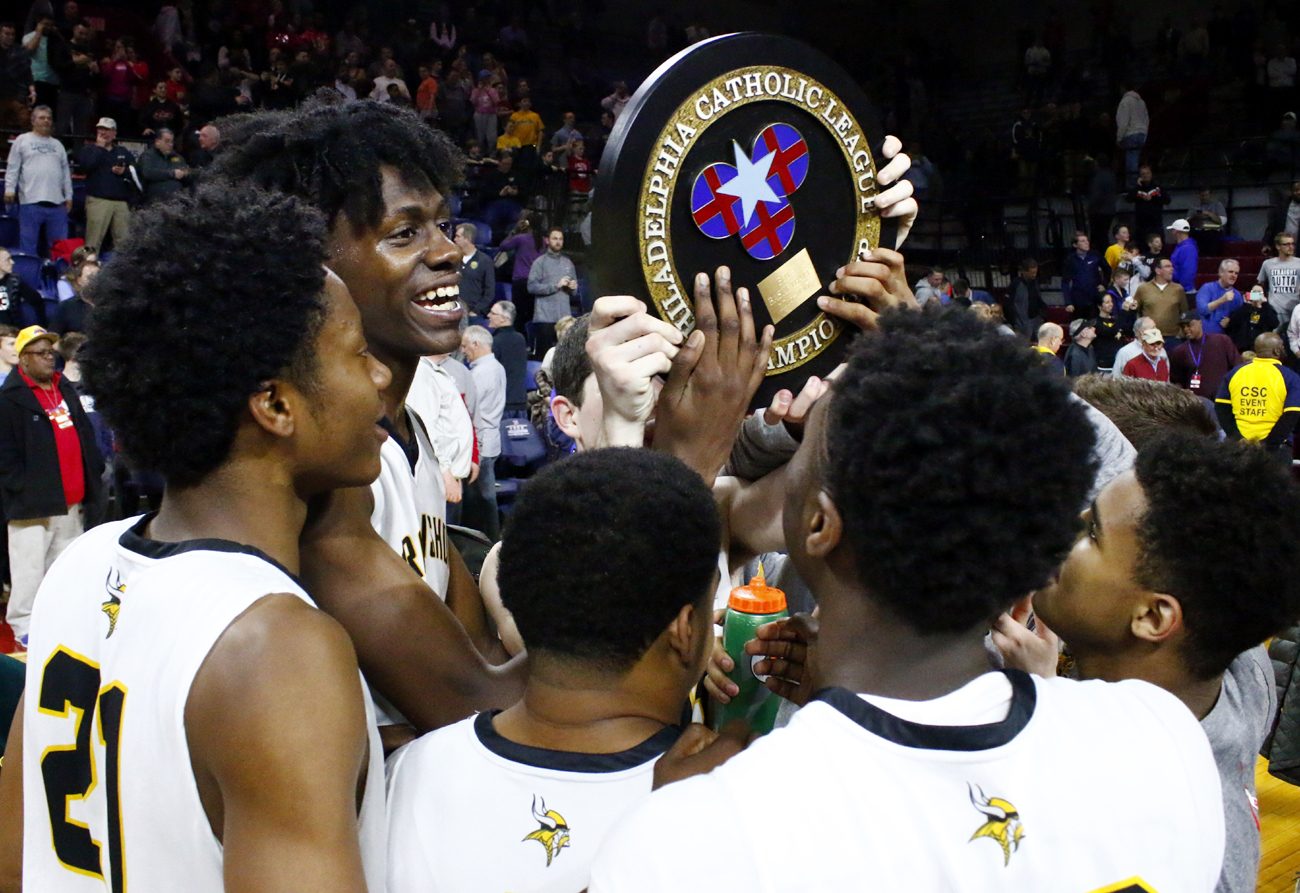 In front of a sell-out crowd at an electric Palestra, Archbishop Wood pulled a Lazarus act. Trailing 31-18 at halftime behind woeful shooting and debatable decision making, the Vikings left Clark Kent in the locker room and emerged as Superman.

Or, in this case, Supermen.

Suddenly nailing their shots from all over the gym and wreaking havoc for Neumann-Goretti’s suddenly silenced snipers, the Vikings outscored the Saints by 25-10 in the third quarter, then thoroughly outplayed them in the fourth to capture a 65-58 triumph and the 51-year-old program’s first-ever Catholic League basketball title.

On Thursday, three nights removed from their historic feat, standout Vikings were asked to describe the experience. 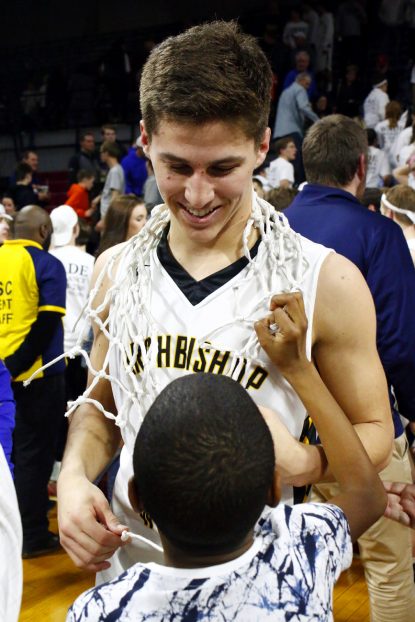 A young fan looks up to Archbishop Wood’s standout player, Collin Gillespie as he wears the freshly cut net around his neck after the Catholic League championship game. (Sarah Webb)

But a thoroughly interesting response occurred: Wood’s players were more inclined to focus on the upcoming PIAA district and state playoffs.

“We enjoyed it the past couple days, but now we have more to do,” said Villanova University-bound senior guard and league MVP Collin Gillespie. “It has been crazy socially the last couple days just having people you don’t really know in the area come up to you and congratulate you and stuff like that, so it’s been pretty cool.

“Practice hasn’t been the best, but we’re starting to get re-focused on what the big goal is for the end of the year and that is to win the last two championships.”

Gillespie was held to two points in the first half, but a one-quarter, career-high 16 points in the fourth quarter left his stat line with a more appropriate 24 points – he averaged 24.1 in 13 regular-season league games – to go along with seven assists.

Even when the Vikings trailed by 15 in the second quarter, Gillespie insists he remained confident.

“I wasn’t really worried that much,” said Gillespie, a parishioner at Huntington Valley’s St. Albert the Great. “I figured that we would start to knock down shots eventually and there was a lot of time left, and that’s what happened.”

The 6-foot, 2-inch star who swished his last six free throws in clutch time was asked for his fondest memory.

“Just seeing my teammates and how happy they were,” he said. “Sometimes in the summer, it was hard to be working every day, but it was definitely awesome seeing all of them so happy and how they realized how all the hard work paid off.”

Senior Matt Cerruti, who scored 10 of his 15 points in the pivotal third stanza and added seven rebounds, admitted that winning the league title “honestly hasn’t really sunk in yet.”

“We aren’t really paying attention to that. We are focusing on winning a district championship first and the hopefully a state championship after.”

“That one game is something I’ll remember forever, and that memory won’t leave me,” said Funk. “Right now, though, my team and I are just focused on winning districts and states now.”

PREVIOUS: A shocker so big, it still hasn’t sunk in

NEXT: Cardinal O’Hara skates away with Catholic League hockey title