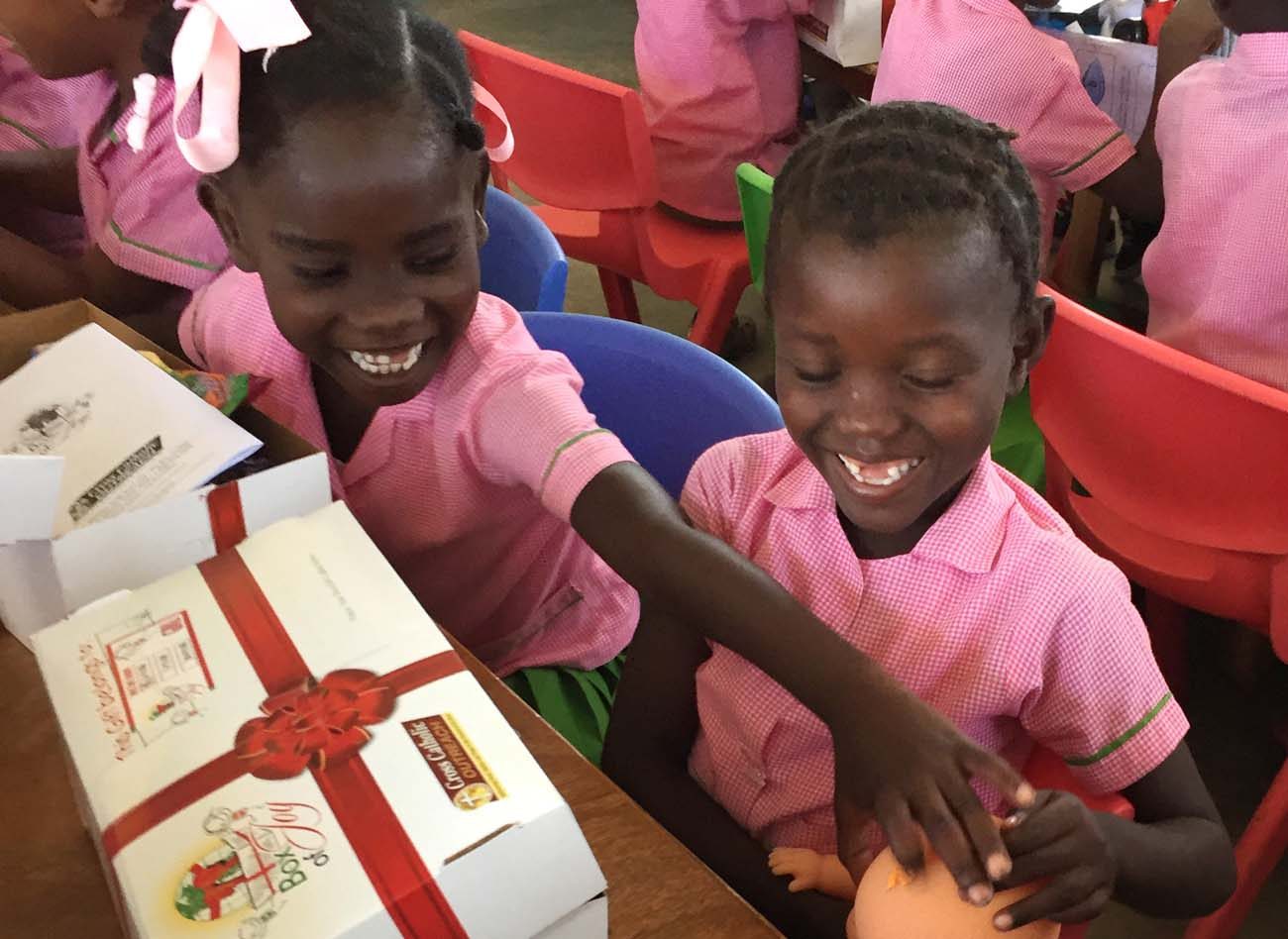 Nor had most of the children in remote Camp Perrin. So when Cross Catholic Outreach’s Box of Joy program visited to deliver thousands of gift boxes provided by people across the United States, many children literally didn’t know what to do.

All seemed appreciative, but many also appeared apprehensive to dive into their presents.

“It’s really a shock,” said Box of Joy director Steve Bostian. “Many of the things they receive, they don’t know what they are. The poverty is so extreme here that I think they are in shock.”

People in 46 U.S. states filled shoebox-sized containers with small toys, hygiene items or treats last fall and those “Boxes of Joy” have been distributed in recent weeks to children in poverty in Guatemala, Dominican Republic and Haiti by Cross Catholic Outreach, a relief and development agency based in Boca Raton, Florida.

Children at the Project Hope South Catholic school and orphanage in Les Cayes, along with those in Camp Perrin and Torbeck, received their gifts March 22-23.

It’s the third year for Box of Joy, and Bostian said almost 32,000 children will benefit from the program during this campaign, including about 10,000 in Haiti, considered the poorest country in the Americas by World Bank.

“(I) like everything,” 14-year-old Syndia said through an interpreter.

“I think of my own kids and how excited they get at Christmas every year and I think for these kids, it’s the first time. Almost all of them have never gotten a gift before and you can look around and see they almost don’t know what to do,” Cavnar said in an interview with a visiting reporter from The Catholic Week, newspaper of the Archdiocese of Mobile.

And once children understood the purpose of the gift, opened their boxes and took items out, many meticulously repacked their boxes.

“When we first started to distribute to Haiti, I could not understand why the kids weren’t taking everything out and playing with it,” Cavnar explained. “Then my Haitian staff explained they know this is something for their whole family and they will first go to their family and share it.”

In Camp Perrin, 14-year-old Figgins Fedna received his Box of Joy at his home. Along with pens, sandals, and toiletries, his box included a package of lollipops.

Figgins immediately shared his lollipops with siblings and neighboring children.

“You have to admire kids who have that perspective,” Cavnar said.

Some of the more popular items were unsurprising. Hach Seldor, a 7-year-old who attends the Project Hope school, said a small ball that would fit in someone’s palm was his favorite gift.

But Cavnar was struck at the popularity of hygiene items.

“One kindergarten kid, his eyes lit up when he saw the toothbrush. He kind of grabbed it and held it up,” Cavnar said. “That tells you something about the poverty of children and what matters.”

Bostian also explained a simple coloring booklet called “The Story of Jesus” that’s added to each box is popular.

“When people this poor are given a card, a letter or a special certificate at school, it means so much to them. They always pin it up on the wall of their house. And those things will stay up there for years. For Americans, we might get a greeting card, read it, it may lay around the house a few days and then it’s in the circular file,” he said.

Although Box of Joy began in 2014, Cross Catholic Outreach was founded in 2001, supports 267 programs in 36 countries and given more than $1 billion toward poverty relief.

It works with mission partners such as Project Hope South to better communities and Box of Joy is one of Cross Catholic’s programs to assist the poor. The project was added to the Box of Joy campaign after Hurricane Matthew crippled Les Cayes, about 120 miles west of the capital, Port-au-Prince, in October.

“It builds on what we’ve been doing for a decade. We are here with long-term relationships with education, vocational training, nutrition and medicine,” Cavnar said. “It’s a special delight to have a way for families in the U.S. to engage too. It’s a way for parents to educate their children about the needs of the poor, to do something tangible. Keep in mind, underneath it, there’s a much deeper and broader commitment.”

NEXT: Loving families are central to bringing joy, mercy to world, pope says