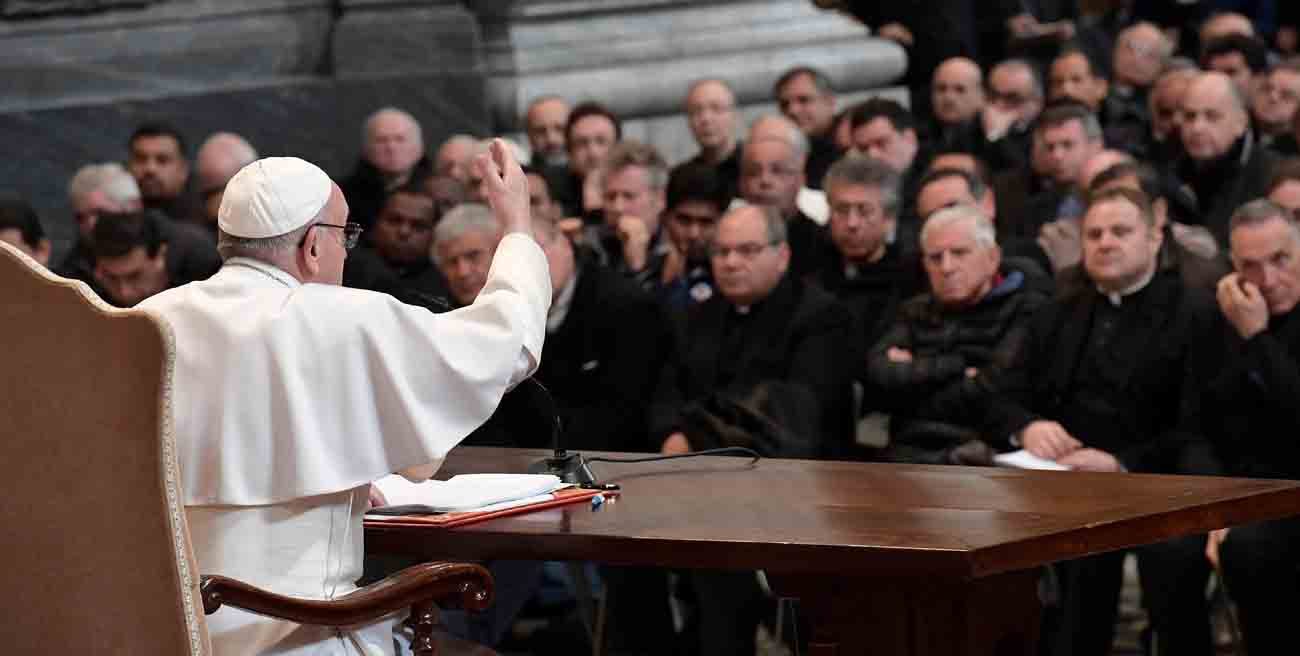 Pope Francis addresses priests of the Diocese of Rome during a meeting at the Basilica of St. John Lateran in Rome March 2. The Vatican said Pope Francis spent about 45 minutes hearing confessions, offering the sacrament to a dozen priests before beginning his talk. (CNS photo/L'Osservatore Romano, handout)

ROME (CNS) — Faith is a continuing path of growth and maturity that cannot progress without the presence of temptations, Pope Francis told priests of the Diocese of Rome.

How faith develops in “a man, in a priest” despite his flaws can be seen in St. Peter, the pope said March 2 as he led a meditation with diocesan and religious clergy.

The meeting, held at the Basilica of St. John Lateran, was delayed for roughly 45 minutes as Pope Francis heard the confessions of a dozen priests, according to the Vatican press office.

Greeted with a warm applause by the priests, the pope said that he would not read his entire meditation and instead focus on key aspects of his talk, titled, “The progress of faith in priestly life.”

Without a continual growth in faith, the pope said, priests run the risk of remaining immature and living priestly life “halfway.”

“And we priests, if we do not have a mature faith capable of generating faith in others — that is, fatherhood — we can do harm and so much evil. But if faith grows, it does so much good,” the pope said, departing from his prepared remarks.

Faith, he continued, must be nourished by three important components: memory, rooted in the faith of the church and “the faith of our fathers”; hope, which sustains faith; and “discernment of the present moment.”

These three components, however, hinge on a “fixed point.” The pope gave the example of a basketball player who, with his foot firmly “pinned to the ground,” moves to either protect the ball, find a way to pass it or look for a path toward the basket.

“For us, that foot pinned to the ground, around which we pivot, is the cross of Christ,” the pope said. “Faith — the progress and growth of faith — is always based on the cross, on the scandal of the cross.”

Memory, he explained, feeds and nourishes faith, particularly the memory of the “covenant the Lord has made with us” through parents and grandparents.

Speaking off-the-cuff, the pope recalled a retreat when he found it difficult to be touched by the preacher’s meditation on death and the final judgment.

At that moment, he said, “I remembered a writing my grandmother had on her nightstand: ‘Be careful, God is watching you. Think that you will die and you do not know when.’ And in that moment, I could pray and go forward. It was (my) roots that opened the way. A Christian always progresses from the root. Do not forget your roots.”

Pope Francis said that faith is also strengthened through hope, which helps priests to “find new things” from their past to encounter God in those they are called to help.

“Faith is knowing how to see in the face of the poor you meet today, the same Lord who will come to judge us according to the protocol of Matthew 25, ‘Whatever you did for one of these least brothers of mine, you did for me.'”

To understand the past and sustain hope for the future, he added, discernment in the present is important and it often involves taking a step back to see the bigger picture.

Priests, however, often have the “insidious temptation” of “sterile pessimism,” which seeks to resolve matters quickly and often gives in to the “evil spirit of defeat.”

An example of a progression in faith through memory, hope and discernment, he said, is the apostle Peter, a man who is a “paradox” in that Jesus would often extol the virtues of others while Peter was often reproached for his lack of faith.

Peter’s faith, however, is “faith that is tested,” and through that he has the mission of confirming the faith of the disciples and the church today.

At key moments in his life, the pope continued, Peter is strengthened in his faith. Jesus “prays for him so that his weakness, and even his sin, is transformed into a grace” for him and for all.

Not following the example of Peter, the pope said, “a priest or a bishop who does not feel he is a sinner, who does not confess, who is closed in himself, does not progress in faith.”

Pope Francis explained that the devil’s greatest temptation was to instill in Peter the idea that he was “not worthy to be Jesus’ friend because he betrayed him.”

Although “the weight of our sins makes us move away from the Lord,” the pope said the Lord is always faithful and “confirms us in our shepherding, in leading the flock.”

“The Lord keeps moving forward and Peter’s faith is full. And that sinner, who denied him, the Lord made him pope,” Pope Francis said. “That is the Lord’s logic.”

NEXT: Russian Catholics hope for a new springtime for small Byzantine church